AI to Detect How Safe is Your Drinking Water

Arsenic has been a menace in Eastern India especially along the banks of the Ganga for almost two decades now, putting millions of people at severe health risk. Researchers have been studying the distribution patterns of the contaminated groundwater for years to develop a large-scale ecological and environmental framework addressing this challenge in the region. For the first time, a breakthrough has been achieved. A group of researchers from IIT Kharagpur has successfully predicted the distribution of groundwater arsenic and human health risk in the affected areas using AI algorithms on environmental and geological and human usage parameters.

The researchers have delineated the high and low arsenic zones across the entire delta using artificial intelligence and quantify the number of people exposed. This study has led to the development of probabilistic models of arsenic occurrence, exposure and human health risk assessment within the delta region. The model shows a strong association of ‘surficial aquitard thickness’ and ‘groundwater-fed irrigation’ to regional-scale As-hazard.

Among the worst affected zones are the districts of Nadia (93%) and Murshidabad (82%). The study has been recently published in the international journal Science of The Total Environment. [Download Paper]

“Our AI models predict the occurrence of high arsenic in groundwater across more than half of the Ganges River delta, covering more than 25% area extent in each of the 19 out of 25 administrative zones in West Bengal. A total of 30.3 million people are estimated to be exposed to severely high As-hazard within the Ganges river delta,” said lead author Madhumita Chakraborty at IIT Kharagpur’s Dept. of Geology and Geophysics. 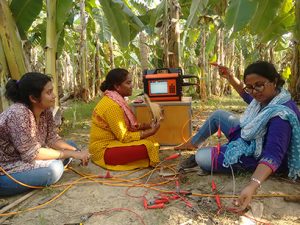 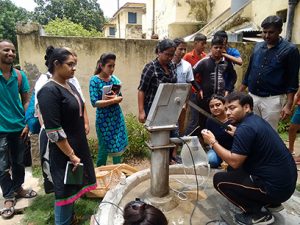 While the predictive model framework would prove to be vital typically for the identification of drinking water sources in arsenic affected areas of West Bengal, it can be used in other parts of the country, which are also suffering from severe groundwater pollutants, said the researchers. 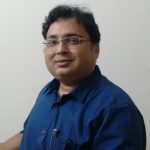 “Eventually, all this information forms the baseline knowledge for the recently initiated Jal Jeevan Mission of the Government of India. The mission is based on providing safe drinking water to every household of the country within 2024 and the outcome of this provides the information for the location of safe groundwater, which is the primary source of drinking water for most of India,” opined Prof. Abhijit Mukherjee from the Dept. of Geology and Geophysics who is leading the research. 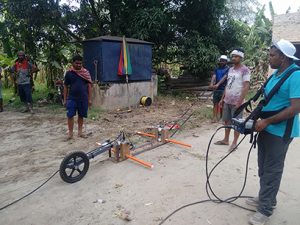 It is to be noted that Eastern India and Bangladesh, which source more than 80% of its drinking water from groundwater sources, are coping with this issue of naturally-sourced arsenic mass poisoning. The studies conducted until now were unable to offer an effective model for policy decisions due to the delineation of the local extent and geochemical mechanisms for arsenic pollution.

The researchers from IIT Kharagpur thus opted for AI which is now being used across the world to successfully model the distribution of groundwater contaminants.

“Such successful use of artificial intelligence in geoscience enables us to find answers and build prima-facie understanding before further detailed field-based investigation or validation. However, such regional-scale models do not completely eliminate the need for field investigation in many cases; especially for groundwater contaminants like arsenic which is known to exhibit well-to-well variability in concentration,” added Prof. Mukherjee.