Close to 150 members of the Batch of 1970, together with their spouses celebrated their 50th graduation anniversary at IIT Kharagpur recently in a grand celebration titled the ‘Golden 2020 Reunion’ (from Jan 24-26). Batch members congregated from all over the world to commemorate the occasion with the twin inaugurals of ‘ADDA’ – their batch’s gift to the campus community,  along with the Alumni Clock Tower which now stands as a gift from the passionate Kgpians across the alumni batches. 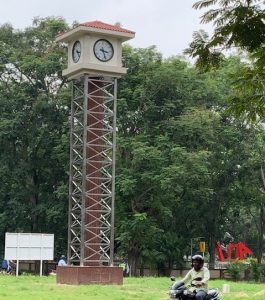 The Alumni Clock Tower was inaugurated by Shri Amit Khare, IAS, Secretary, MHRD, Govt of India, who lauded the IIT Kharagpur alumni for their thoughtful gift to the campus community. “As the District Collector of Darbhanga, which had two clock towers, I often wondered the need for them when people had their wristwatches to look at the time. I soon realized that they were great socializing points. Both ADDA and the Alumni Clock Tower would be places of interaction and exchange of ideas, which is what great institutions facilitate,” said Mr. Khare during the inauguration.

The Clock Tower has been designed by renowned architect and alumnus of the Institute, the late I.M. Asthana, for whom this tower was the last project. Thanking the batch for their sustained support to the Institute, Director of IIT Kharagpur, Prof. V.K. Tewari, said, “The Clock Tower may be made to display more features in the future, such as digital display of the temperature, humidity or announcements of major events. IIT Kharagpur has the largest infrastructure, students, faculty as well as alumni of all the IITs. With this enormous resource, particularly the assistance and mentorship of the alumni, no dream is impossible to achieve.” 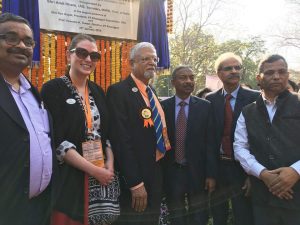 Mr. Arjun Malhotra, a pioneering figure in the Indian software industry, Co-Founder of HCL, and a top fundraiser among the Batch of 1970, suggested that a commemorative postage stamp could be released by the government  on the occasion of IIT Kharagpur’s 70th anniversary next year.

‘ADDA’, the batch’s gift to the campus on their golden anniversary, is an expansive area with a sculpted garden and varied seating arrangement. Renowned architect Abin Chaudhuri designed the gigantic red emblem that marks out the space. Speaking on behalf of the batch, Mr. Ranbir Gupta, President of the IITKGP Foundation USA and reputed US-based architect, said,”’ ADDA’ – which reads the same from left to right and right to left – means different things to different people, but it belongs to the IIT Kharagpur’s alumni, its students, its faculty, the staff and the entire community of IIT Kharagpur. This beautiful piece that sits at the crossroads on the campus is a small token of our appreciation for the Institute.” 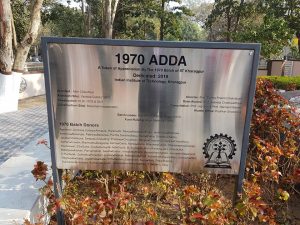 The Batch of 1970 was dubbed “The Incredibles” during the celebrations, and not without reason. Iconic Schools and Centres – G.S. Sanyal School of Telecommunications, Ranbir and Chitra Gupta School of Infrastructure and Design, PK Sinha Centre of Bioenergy, MN Faruqui Innovation Centre – have been founded by leading members of the batch. Batch leaders have also come forward to fund chair professorships, various flagship programs of the Institute, workshops, advanced tech labs, for yet to be instituted schools and academies and have also pitched in, together with other alumni, to reach internet connectivity to the hostels. Together they raised Rs 1.1 crore recently as a ‘Super Endowment Batch’, donating on behalf of even their departed classmates, to name a classroom in the Nalanda academic complex after their batch. 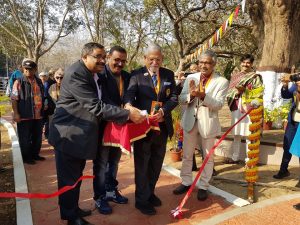 ADDA being inaugurated by Mr. Ron Gupta (second from right)

“The reason why the Batch of 1970 will remain a ‘Model Batch’ for all times to come is not because of a few of its active members. The synergy among the Batch is unique and incomparable,” said Prof. Subrata Chattopadhyay, Dean, Alumni Affairs. To enable batch members to relive their joyous student days, the Grand Reunion was held simultaneously with the Spring Fest. ‘The Incredibles’ were seen partaking Spring Fest’s unique fare of entertainment, that included top performers like Divine and Ritviz, from the front circles among the audience.

Together with alumni all over the world, members of the Batch of 1970 also contributed for the setting up of the Alumni Clock Tower. “This is going to serve as a beacon for the entire campus,” said Mr. Gupta, who, as President of the IITKGP Foundation USA, has led the fundraising efforts. On behalf of his batch, Mr. Gupta also promised to fund a ‘Center of Happiness’ and a ‘Hall of Fame’ in the premises of the Technology Students’ Gymkhana. 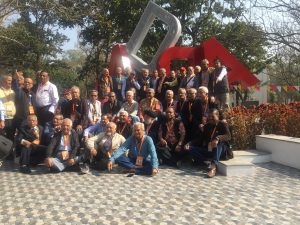 “The Center of Happiness, to be established in association with the Rekhi Centre for the Science of Happiness, will be a huge space at the Gymkhana devoted to students’ wellbeing where they can pursue their individual interests, be it listening to music or practising yoga,” said Prof. William Mohanty, President of Technology Students Gymkhana. The Hall of Fame at the Gymkhana will record the major extracurricular achievements of the students.