The fight against Covid-19 is an unequal war, and no one understands that better than the students of IIT Kharagpur. Several of them associated with the Gopali Youth Welfare Society, an NGO run by IIT Kharagpur students and faculty members with the support of locals, have come together to raise funds to assist around 2000 families residing in and around Gopali. With the assistance of IIT Kharagpur faculty, they have also been able to distribute thousands of masks to those who need it the most. 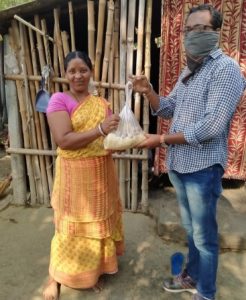 Many of these students are at home but have been unable to get their mind off the situation in Gopali. “The GYWS president, Mr. Mrinal Kanti Bhanja, is a local and he apprised us of the fact that many families in the area were not even being able to have a square meal a day. Many of them do not have ration cards, and so cannot access government help,” said Tanishka Aggarwal, coordinator for GYWS and 2nd year BTech student of Industrial and Systems Engineering.

The students pooled in money. Together with some contributions from the GWYS itself from funds that could not be spent as activities have remained suspended because of the lockdown, they put together a corpus of an amount above Rs 1 lakh. The money was ditigally transferred to the GWYS officebearers who, working with the Gopali Gram Panchayat, identified the beneficiaries and put together a team of 15-20 volunteers. 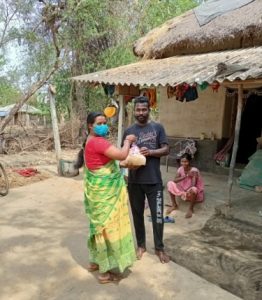 A week’s ration of rice, onions, potatoes, Nutrela and hand sanitizers was distributed by the volunteers to the 2000 families. Many of these families subsist by working for IIT Kharagpur. Some of these people work as ward boys in hostels, do the laundry or find employment as rickshaw pullers, domestic help within the campus or as labourers in the construction work undertaken by the Institute.

The students’ initiative has also ensured the distribution of 5,000 masks by GYWS in seven gram panchayats – Arjuni, Barkola, Hariatara, Khelar, Vetia, Kalaikunda, and Gopali. The masks were sourced from a production unit in Madhyamgram. Prof. Bhaskar Bhowmik of the Rajendra Mishra School of Engineering Entrepreneurship and Prof. D.K. Maiti of the Department of Aerospace Engineering have been key facilitators in the process. While Prof. Bhowmik helped source the masks from Madhyamgram, Prof. Maiti arranged for their transportation through the assistance of the Frank Ross unit in IIT Kharagpur.

Prof. Bhowmik said, “My friends, Ms. Mausumi and Mr. Sanjay Dasgupta, who are residents of Princeton, New Jersey, are engaged in various philanthropic activities globally and actively participating in various COVID 19 fundraisers. Through our various conversations, they decided to set up a mask production unit with the help of their friends, Mrs. Runa and Mr. Kaushik Ghosh in Madhyamgram. This also helped employ 6 unemployed tailors from that area. They have donated the first 5000 high-quality masks to us so that we could reach those who needed them the most. I am thankful to several other people, not the least to Prof. Maiti, who were involved in the process. What is most important is that we have been able to reach the masks to the grassroots – the labourers involved in MGNREGA – who cannot afford this basic protection against the virus.”

About 20 extra masks were handed to the panchayat pradhans. They were also offered N -95 masks with sanitizers for volunteers. About 500 masks will be provided to ASHA workers, police, BDO SDO office and other local government offices. Around 1000 masks are waiting distributed among various other people, some of them to Jagriti Vidya Mandir’s students.

Jagriti Vidya Mandir, located in Tangasool village that is a few kilometres away from the Institute is a school run by GYWS and has an enrolment of 240 students from Nursery to Class V. IIT Kharagpur’s students, organized into the school review committee, regularly monitors the activities of the school and also undertakes skill development among students. 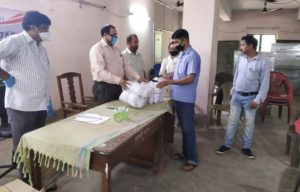 “GYWS activities have become part of our daily schedule,” says Tanishka, who also mentions that students together with campus residents of IIT Kharagpur help organize Sports Day and Independence Day for the school students. “Students, organized into various committees and bodies, take care of various aspects of the running of GYWS,” explains Tanishka.

The student run NGO also has three or four cabs that were used for the transportation and distribution of the food stuff for the despondent families recently. “Now they are being made available to the local police whenever they require them,” said Tanishka, who is hoping that undergraduate, postgraduate and research scholars who are part of GYWS continue to keep alive efforts to reach out to Gopali’s underprivileged. Monalisa Sahu, also associated with GYWS and a 2nd year BTech student of Metallurgical and Materials Engineering, concurred, “Helping people to access the bare essentials is the least we can do.”