Cell culture is integral to biological research. It provides a model to study the standard physiology and biochemistry of cells, the effect of drugs on cells, how cells behave under different culture environments. But the growing of cells on flat plastic surfaces does not accurately model their state inside the body. Hence scientists are increasingly using various three-dimensional (3D) cell culture strategies that allow cells to grow or interact with their surroundings in a way they actually do inside the body. 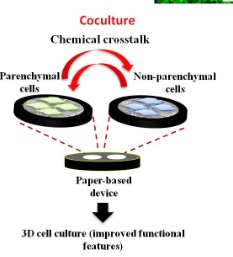 The prevalent 3D culture systems are mainly scaffolds, hydrogels and 3D printed models. Producing them is time consuming and requires a lot of technical skills. Often there are batch to batch variations. The base materials are also expensive. So, the development of cheap, portable and experimentally flexible 3D models has become necessary. A team of researchers at IIT Kharagpur has provided the answer by utilizing commercially filter paper for mammalian cell culture, which has been rarely reported.

Filter paper has often been used in making point-of-care devices (such as paper fluidics), but so far they have not been used this way. Composed of randomly arranged cellulose fibres, filter paper lacks cell adhesion motifs, making it amenable to being used as a paper substrate. However, for making it a suitable substrate, modification techniques had to be implemented. The main breakthrough achieved by this group is the use of a technique that makes it possible to fabricate cheap and affordable paper substrate for 3D mammalian cell culture. 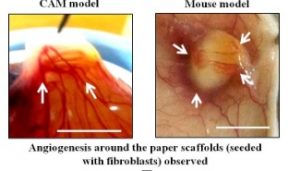 The research group led by Prof. Tapas Kumar Maiti of the Department of Biotechnology, IIT Kharagpur has developed paper-based devices using LaserJet methodology (to defines cell culturable area) followed by (3-Aminopropyl)triethoxysilane (APTES) or glutaraldehyde/PAMAM treatment of the devices. This increases the interaction of the cell or other biological macromolecules (such as proteins/DNA) with the paper matrix. In order to further provide essential biochemical cues required to maintain physiological behavior of cells, they coated the amino-functionalized paper with natural extracellular matrix proteins. 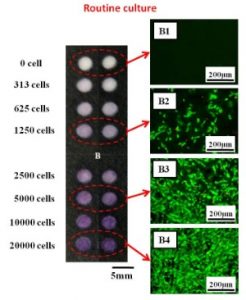 Their results showed that the developed paper devices favoured the adhesion, proliferation, and 3D growth of multiple cell types including normal, transformed, cancerous, and stem cells as compared to the pristine paper matrix. These established 3D cultures on the paper matrixes (“in vitro paper-based tissue models”) could be extended for in vitro applications such as on-paper coculture models, on-paper gene expression analysis (immunocytochemistry/in-cell ELISA), drug screening and cell invasion assays. Further, such 3D culture could also be used to address relevant biological questions pertaining to cell-matrix interaction, cell-cell interaction, matrix confinement effects and so on.

It would be interesting to note that the cost incurred for procuring a conventional plate for coculture and transwell migration studies is Rs 7,000. The paper devices fabricated by the team of researchers at IIT Kharagpur cost Rs 100-200. Low media requirement and multiplexibility of the developed paper devices further cuts down the overall cost of biological assays.

The researchers also evaluated the systemic toxicity and antigenic response of the paper matrixes and found that the treated paper substrates significantly reduced the immunogenic response in the host, along with enhanced cellular infiltration and cell spreading of the infiltrated cells in the mouse model as compared to pristine paper substrates. This could provide the opportunity to use paper as a cheap and affordable substrate for the development of humanized animal models. 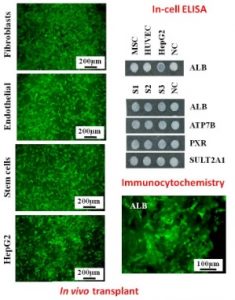 Prof. Maiti said, “Considering the simplicity, cost-effectiveness, and multiplexibility of the paper-based liver models, it is deemed to be ideal for developing cell-based bioassays especially in the resource-limited settings. Moreover, such technological advancement in the field of paper-based cell culture could open up new vistas in the field of biotechnology and engineering and could be used to disseminate the cell culture-related knowledge at the school/college levels.”

The team, consisting of Prof. Suman Chakraborty of the Department of Mechanical Engineering, Prof. Sudip Kumar Ghosh of the Department of Biotechnology and researchers Mr. Tarun Agarwal, Mr. Pratik Biswas, and Ms Aruja Rustagi from the Department of Biotechnology have applied for patent of their technology. The paper, ‘Biofunctionalized cellulose paper matrix for cell delivery applications’, was published in the International Journal of Biological Macromolecules ( Download paper https://www.sciencedirect.com/science/article/pii/S0141813019309109 and https://www.sciencedirect.com/science/article/pii/S0927776518305940)