These are difficult times. Here’s now IIT Kharagpur’s students inside the campus are braving the odds

“No two days are alike, nor even two hours, neither were there ever two leaves of a tree alike…”

Sometimes, like times such as these, when the hours seem to collapse into one another and the days just roll on, the profound wisdom contained in the words of the famous British painter, John Constable, have trouble seeping in.

But we are all bravehearts in our own ways, or so say the students of IIT Kharagpur, many of whom are residing within the campus and are finding their own ways to beat the gloom.

Some of them have not been able to go back home. Others have stayed back to keep near and dear ones at home safe. The way back, after all, would have not only exposed them to the Covid-19 virus but also made them unwitting carriers of the disease home, where some have aged parents and grandparents. Others stayed back in the fond hope of being able to tie up loose ends in their academic work.

The best thing that can happen to anyone during a trying time is to have friends around. That alone has made the biggest difference to the more than five thousand students who are braving the lockdown in their respective Halls. They are not allowed to freely move within the campus, and even in the Halls, there are restrictions in place.

So how are they spending their time? “Since the lockdown and the restriction of movement came about, we have been reading books and binge-watching TV shows, also attending classes which are being conducted online. The assignments and projects keep us busy most of the days here,” says Snigdha Pathak, final year UG student in the Department of Chemistry. 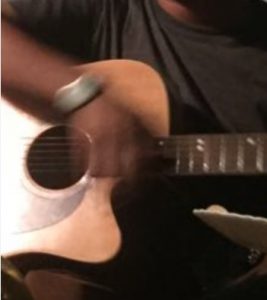 And yet, they have been doing amazing things. Snigdha herself, together with her batchmate and wingmate, Ritika Agarwal, at the SN/IG Hall have been participants in the PanIIT WINIndia Challenge (Wellness Indoors Now) and have managed to bring a lot of creativity in the way they have tackled the fitness challenges. In the first challenge – leg raises over an obstacle – it was Ritika’s idea to feature one of the participants as the plank, while the other did the leg raises.

Aditya Singhania, General Secretary Sports and Games, Technology Students’ Gymkhana, says that 800-850 students from IIT KGP have participated in the challenge either from their hostels and homes. Shivam Gupta, 3rd year student of Industrial and System Engineering and a regular participant in the Inter-IIT athletics, too participated in WINIndia together with fellow athletes in RP Hall. “When the challenge started, we used to ping everyone, telling each other ‘let’s do it’. But it really felt good when everyone started taking part,” says Shivam. He believes that girls have been more creative than the boys and is happy to see an overwhelming number of 1st year students participate in WINIndia, where IIT Kharagpur made it to the 2nd runners-up position.

Much like Shivam, for Aman Damara, who was captain of IIT KGP’s cricket team last year, fitness has been and remains a part of the daily routine. He exercises for 1-1.5 hours every day in the terrace of LBS Hall. A 2nd year MTech student, Aman even welcomes the respite from the regular routine. “It has given us time to think about ourselves, something we could not do earlier. So I am using the time to read up things that will help me in the future.” Aman is mostly reading books on entrepreneurship, and of course academic papers now that he knows he has to submit his research paper by May 25, a month earlier than scheduled.

Picking-up-that-long-forgotten-book-lying-under-a-pile-of-other-reading-material is something that appears to run on loop in every conversation on the daily routine during lockdown. Many like Rana Madhvendra, who is Editor, Technology Students’ Gymkhana, have revived their childhood reading habit. Rana has already finished reading three books – Shoe Dog: A Memoir by the Creator of Nike, Bloomberg by Bloomberg and When Crime Pays: Money and Muscle in Indian Politics. Ninaad Lohakare, Vice President at Technology Students’ Gymkhana, IIT Kharagpur, is reading India after Gandhi by Ramachandra Guha. Even Bhaskar Basak, member of the Branding and Relations Cell of IIT Kharagpur, who is juggling several equally enticing activities – binge watching films with friends, playing cards, or doing some assigned work for BARC, has picked up an odd Murakami or two.

Bhaskar, in fact, has gone back to another activity he had done in school – sketching. Some like Ayush Kumar, a 3rd year student of Ocean Engineering and Naval Architecture are trying something completely different. Ayush is learning to play the guitar through an app and believes he is only a week away from being able to play a song. “It’s just that my fingers have to move a lot faster,” says a determined Ayush. 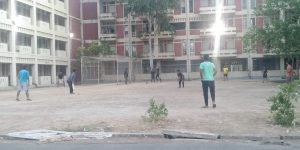 Almost all of them are listening to music of some kind. “I am listening to hip-hop, classic rock, alt-rock, etc. We have also been learning to cook a bit since all the outlets are closed and we have a fixed time for availing mess facilities,” says Rana. Bhaskar has mastered making the omelette and his now trying his hand at frying potatoes.

But there are some who have taken up gardening. At SN/IN Hall, Atanuka Pal, a 5th year student of the Department of Chemistry, is tending to the 30 plants that she has started caring for. She has also been painting, on and off. But what sees her throughout the day is that game of badminton with her friends in the evening.

Still others like research scholars Biswarup Mondal and Pragnaditya Malakar of the Department of Geology and Geophysics, are keeping themselves busy with their green initiative, Vision Prabaho, that recently conducted the Green Indoor, 50th Earth Day online competition for students and children of the campus. They are working on Vision Prabaho’s awareness campaign on Covid-19, which has seen them translate the MHA’s directives into regional languages and come up with a cartoon strip for wider dissemination of the information. 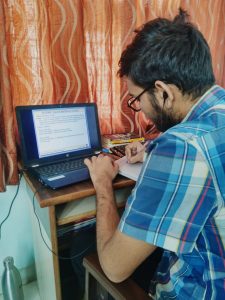 Classes, friends, and a bit of coding, is how Chinmay Singh, a 3rd year Chemical Engineering student sums up his day. He is reading novels and also doing his remote internship with IBM Research. “A lot of my batchmates have also taken up remote internship as this is a two credit course in the third year and industry experience is very valuable.”

Chinmay’s response shows how IIT Kharagpur’s students are braving the odds. Many of their plans, industry internships, internships abroad, research partnerships, even job appointments hang in balance owing to the situation forced down on an unsuspecting, unprepared humankind by Covid-19.

And yet they keep their chin up – working in isolation, or following a long forgotten passion that once brought them joy, taking up new hobbies and seeking out the comfort of their friends’ company to steer them through these difficult times.