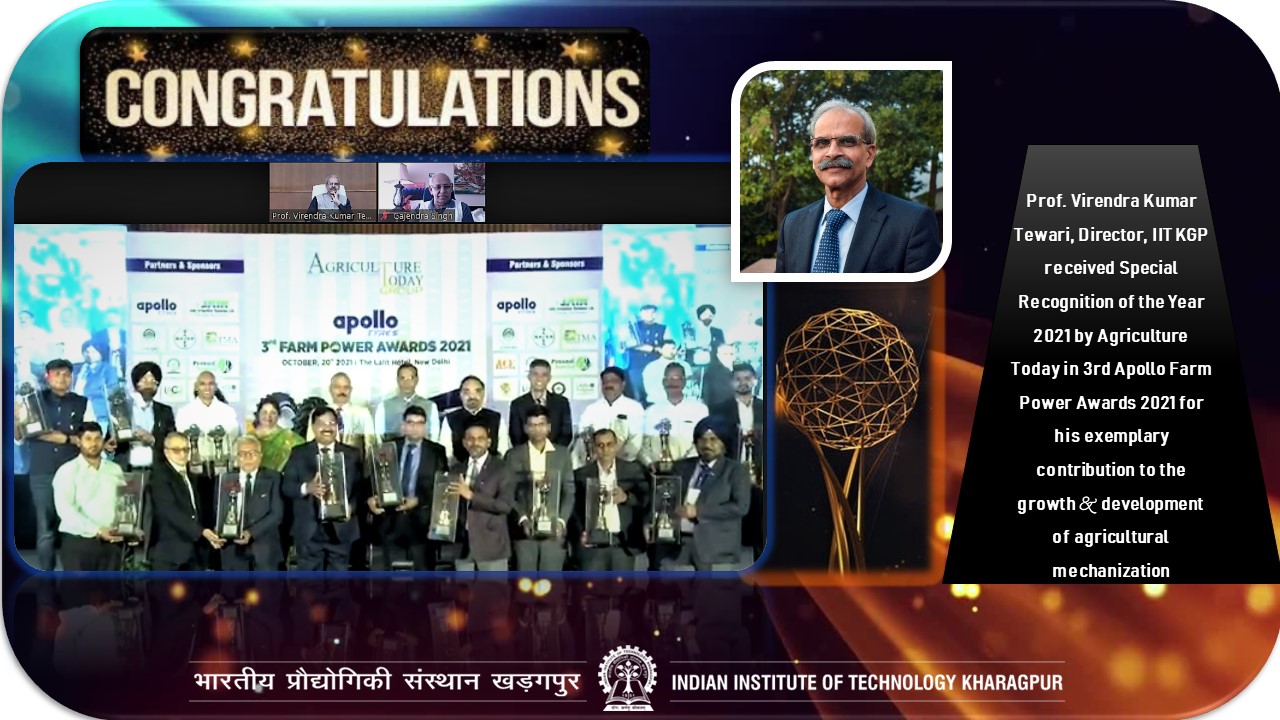 IIT KGP takes immense pride and honour in congratulating Prof. Virendra Kumar Tewari, Director, IIT Kharagpur for being conferred with the Special Recognition of the Year Award 2021 by Agriculture Today Group in the 3rd Apollo Farm Power Awards 2021. He was acknowledged for his exemplary contribution to the growth and development of agricultural mechanization in India. Prof. Tewari participated in the award ceremony through video conferencing. Agriculture Today conducted the 3rd APOLLO Farm Power Awards 2021 on Wednesday, 20th October at Crystal Ball Room, The Lalit, Connaught Place, New Delhi. Distinguished Director General, Indian Council of Agricultural Research, Dr Trilochan Mohapatra graced the occasion as the Chief Guest. Agriculture Today Group has been in the forefront in bridging the gaps, influencing policies, creating business networks and recognizing achievers. To extend due recognition to the role models of farm mechanizations in India, they have taken this initiative to accolade the achievers.

His rich and varied exposure in the area of Ergonomics and Safety Engineering for systems safety in different manufacturing shops including different Mine projects in Tata Steel, Jamshedpur from 2003 to 2013 along with collaborative research with several Tractor Industries in Chennai, Mumbai and Pune augmented the scope of convergence for farm technologies. Other noteworthy acclaims include his contribution in the field of Tea Engineering with Tea Companies like Duncan’s Agro & Williams and Magor Pvt. Ltd. in the design and development of Tea Machinery.

Conferred with several awards and accolades by the Indian Society of Agricultural Engineers, the Indian Society for Technical Education, National Research Development Corporation,Jawaharlal Nehru Award, Jawaharlal Nehru Award for his exemplary contributions in the field of agricultural mechanization, Prof Tewari has always solicited technological advancement in agriculture modernization and its implementations in the Indian Agro Industry.

On receiving the award, Prof Tewari shared some of his insights on the subject matter pointing out that with new scientific break-throughs made in one field, new evidence of progress is certainly to be seen in the related fields. He said that the developing countries tend to design their own strategies in food security given the challenges they face in all aspects of their economy including feeding a growing population, reducing poverty, protecting the environment, managing the effects of climate change and fighting malnutrition. With the help of appropriate technologies, sustainable agricultural development with food security should be a primary concern considering the country’s specific climate as well as political and economic conditions to present development-oriented policies for achieving sustainable food security based on agricultural mechanization that may be adaptable.

The magic of spun silk