Science and technology can be used to create a number of innovations useful in various facets of life. Sometimes the true value of a research work remains unexplored and the innovator is unable to fully exploit the invention commercially. A different situation may arise where some other person copies or misuses an invention without the permission of the true inventor. So it is essential to protect the right of an inventor which not only prevents misuse and copying of an invention but also promotes further innovation.  Intellectual Property Rights (IPR) are a kind of legal right which gives privileges to the owner or inventor of a work.

IPR  gives “limited entitlements to eligible right holders to exclude others from certain uses of the protected material.” Patents form the most integral part of IP rights, but there are others such as copyright, trademarks and trade secrets.  Patents are a kind of monopolistic right given for twenty years of time period for an invention which is novel, involves an inventive step and have some industrial applicability. Not all inventions are patent eligible. Each country has its own law that dictates the patentability of a particular invention. Further in case of biotechnological inventions the ethical and moral dimension plays a critical role.  As biotechnology can be used in every sphere of life from creation of life-form to destruction of the same, for making life saving drugs to life destroying kits; undue protection through patents may affect the society or the public at large. The recent incidence of use of gene editing technology “the CRISPR technology” for removal of undesirable trait from an embryo is a live example of ethical issue in biotechnology.

Together the different forms of IPR try to ensure that human dignity is not compromised, there is equitable access to the outcomes of biological research, there is protection of animals and the environment and the research does not go against public order and morality, that is, the value system of different communities.

Even then, the questions of ethics and morality are not always easy to resolve. For example, should a publicly funded agency patent its research results when they can substantially impact public health? Should the holder of a patent over a basic research tool or a production technology issue license in a restrictive way?

“The question of ethics is very important to biotechnology. We have to know what is patentable and what is not. With patents, you can protect any invention which is new, involves inventive step and has industrial application. But then, can we make a bioweapon and protect it? Will that be ethical? Anything against public order and morality is not patentable. But different societies have different value systems. This is why GM food has gained wide accepted in the US but are held with caution in Europe,” said Prof. Niharika Bhattacharya of the Rajiv Gandhi School of Intellectual Property Law, who recently organized a short term course on ‘Biotechnology and Intellectual Property Law’ at the IIT Kharagpur law school.

Apart from familiarizing participants with the ethical quandary of scientists and lawmakers, the AICTE-QIP sponsored short term course had another purpose – to inform those dealing/researching with biotechnology about when and how to protect that research, how to transfer and licence that technology. “Researchers are often satisfied with the publication of the research in a journal but when it comes to protecting an innovative outcome of research, and the nitty gritty of technology transfer, most academicians are in the dark, especially in the smaller academic institutions,” said Prof. Bhattacharya.

Dr Avinash Kumar, a participant of the course illustrated this point. A teacher of biotechnology at the Dr Bhimrao Ambedkar University at Agra, Dr Kumar has to teach ‘Patenting of Biological Life’ as part of the curriculum. But he also wanted to learn the nitty gritty of patenting as he is himself is considering patenting an invention of his that deals with domestic effluents. He had earlier filed for a patent for his friend’s invention and failed to process it. “I filled up all the five or six forms for patenting, but they never came back to me for the next stage of processing.”

At what stage protection of invention/research IP should be initiated, what can be the long term benefits, how IPR is helpful for entrepreneurship, all these were questions addressed in the course. There were practical aspects too, the participants were taken through the entire modalities of filing for patents. There was also demonstration by Questel, which offers the software for searching, analysing and managing IP. Dr Veena from Reva University in Bangalore who specializes in microbiology and cancer research talked about how the course had helped her to locate patents, something that will invariably aid her work.

There was another aspect of the course that was highlighted by another participant. Prof. Manjit Kaur from Maharshi Dayanand University of Rohtak, Haryana, was mainly there to facilitate her teaching of biotechnology, which, given the new AICTE norms, necessitates introducing students the basics of IPR. She said, “I not only gained the practical knowledge that will go a long way in helping my students who are doing B.Tech or PhD in biotechnology, but also learnt about the job prospects for students in this area. They can be patent agents, patent attorneys and examiners.” The participants were also taken for a field visit to IIT Kharagpur’s STEP to show them how technologies can promote entrepreneurship.

“When researchers are investing time, money and doing R&D, the outcome whether a process or a product should bring them some commercial value. Also it has to be remembered that the larger goal of research is that the technology should be, and can be, made available to the public. This is why I thought it is necessary to introduce and explain the concept of IPR to such scientists/researchers to create more awareness and which will further help them generating commercial value from their research,” signed off Prof. Bhattacharya. The short course on Biotechnology and Intellectual Property Law ended on February 10, 2019. 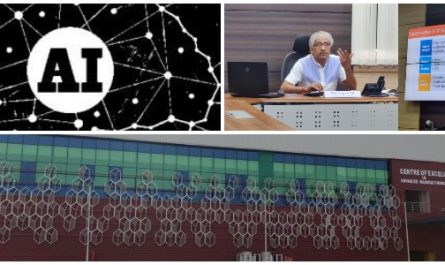