“We can always aspire to better our place, but we should not worry too much about rankings,” said Prof. Subhasis Chaudhuri, Director, IIT Bombay, who was Chief Guest at IIT Kharagpur’s 69th Foundation Day celebrations. He added, “If our products, that is our students and alumni are doing well, that is justification enough of what the IITs are doing.”

Prof. Chaudhuri, who is a Shanti Swarup Bhatnagar awardee and also recipient of the IIT Kharagpur Distinguished Alumnus Award, put before the audience the unique challenges that all IITs, his own alma mater as well as IIT Bombay under his administration, are facing in what he called their “3.0” version. All the leading IITs, he said, had gone through the 1.0 phase during the first 35 years of their inception and the “2.0” phase once they had established themselves. In the “3.0” phase, IITs had to concentrate on ways to create jobs, new companies, bridge the gap with industry and connect with society.

Among the many challenges that the IITs are facing in their present phase is that concerning reconciling their slow infrastructural growth with the burgeoning student population. He also pointed out that IITs need to think about flexibility in their rules and curriculum and also encourage student innovation. In all this, he emphasized the critical role of alumni funding and philanthropy.

The Director of IIT Kharagpur, Prof. Sriman Kumar Bhattacharyya, too laid emphasis on alumni participation in the new challenges that lay before the Institute. “The 2020s bring big challenges in the shape of the Institute of Eminence tag, starting the activities of the medical college and hospital and several such dreams that we will need to fulfil. I am sure with the support and help from all the stakeholders, particularly the alumni, we will be able to take this forward.”

The Foundation Day also provided occasion to hold the second instalment of the Institute’s new annual ritual of ‘Homecoming’. The event brings to the campus batches who have completed the 20th, 15th and 10th year of their graduation. This year saw more than 100 alumni of these batches together with close to 100 family members participate in Homecoming. “I am overwhelmed to see the response of the batches. The number of attendees has increased threefold in just one year,” said the Institute’s Dean, Alumni Affairs, Prof. Subrata Chattopadhyay.

The batches of 1999, 2004 and 2009 took a unique Pledge of Loyalty this year. They not only pledged to uphold the ideals and prestige of their alma mater, but also to take advantage of every opportunity to speak on its behalf, visit, give back time, talent, and whatever else they could share. The Institute’s newly launched ADEP program (Alumni Department Engagement Program) is increasingly seeing alumni come forward to mentor students through guest lectures, collaboration in research and funded internships and placements. Alumni meets have kicked off fundraising campaigns among the Alumni. The Homecoming this year led to the initiation of a campaign by the 1999 batch for a target of Rs 50 lakh.

The 69th Foundation Day also saw the Young Alumni Achiever Award being conferred on 19 young alumni who had distinguished themselves in their chosen domains that ranged widely from fundamental research and entrepreneurship to social activism and cinematography. The day also saw close to 200 children of classes VIII-XII participate in a quiz from six schools in and around Kharagpur. The Institute also had a debate session on the relevance of the IIT JEE exam between members of the faculty and students.

The day also saw the award of the Nina Saxena Technology Excellence Award 2019 to Prof Samir Kumar Pal, Senior Professor in the Department of Chemical, Biological & Macromolecular Sciences at S.N. Bose National Centre for Basic Sciences, Kolkata, for his Innovation of a biomedical device, AJO. 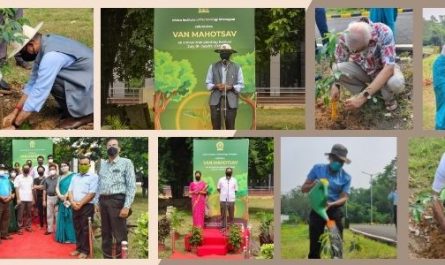