A team of jawans from the Assam Rifles visited IIT Kharagpur en route to New Delhi on their 3000 km long cycle rally from Shillong to the national capital. Championing the bad weather, the jawans paid tribute to the freedom fighters and martyrs of the freedom movement at the Hijli Shaheed Bhavan in a small yet impassioned ceremony.

Having halted overnight on the campus, the contingent of a few dozen cyclists (mostly jawans) arrived at the Hijli Shaheed Bhavan after rallying through the prominent landmarks of the campus. During the ceremony, felicitations and mementos were exchanged between the Assam Rifles and IIT Kharagpur.

In his address, the Director, Prof. VK Tewari, glorified India’s greatness in science and technology. He mentioned incredible engineering feats which have been achieved- for instance, the Atal Tunnel in the Pir Panjal range at the height of 10,000 feet that has eased the movement of security forces in the region and bolstered the defense of the country. In brief, the Director also narrated the story of the sacrifice of freedom fighters Mr. Santosh Mitra and Mr. Tarakeshwar Sengupta. He also mentioned the role of Netaji Subhash Chandra Bose and Mahatma Gandhi in leading the fight for justice for the martyrs and other prisoners. He further spoke of the struggles of Smt. Matangini Hazra who was imprisoned in the women’s jail just across the road from the Hijli Shaheed Bhavan. 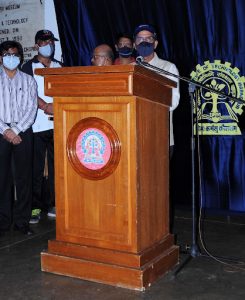 After honoring the martyrs, the jawans toured the science and technology museum and the prison cells. They also toured the Indian Knowledge System gallery and were introduced to the institute’s effort to archive and narrate the story of our rich past and heritage.

While elaborating on the significance of the cycle rally, Major Sudhan Pritam, Officer-in-Charge, Long Cycle Rally, Assam Rifles, said that the rally was an effort to connect and felicitate freedom fighters and their next of kin across the country to honor their sacrifices for the freedom of India. This rally, organized by DG Assam Rifles, Lt. Gen Pradeep Chandran Nair, is one of the multitudes of activities organized under the Azadi Ka Amrit Mahotsav banner. Major Sudhan further mentioned that the cycle rally is connected to the mission and spirit of the Fit India Movement and the Green India Initiative. They have organized short cycle rallies, yoga programs, football, volleyball tournaments, and tree plantation initiatives.

Reflecting on their KGP experience, the Major reflected on the grand historical legacy of the IIT. He mentioned that he would like to return to the Hijli Shaheed Bhavan and learn more about its role in the Indian Freedom Movement. He further said that he would recommend other services like the BSF and CRPF to come and visit this unique institute of national importance.

Finally, he advised the country’s youth always to remember the cost of freedom and never forget the sacrifice of the freedom fighters. Secondly, he stressed the need to maintain fitness and eat healthy food. He also remarked on the critical need to keep our environment clean.

The ceremony gradually came to its end as the rains started pouring heavily. On the tune of the marching band of the Assam Rifles, the Director flagged off the next phase of the jawan’s journey to Jamshedpur. The cyclists braved the rains with a high spirit and left us inspired and motivated to work hard against all odds to build an even greater future for our country. 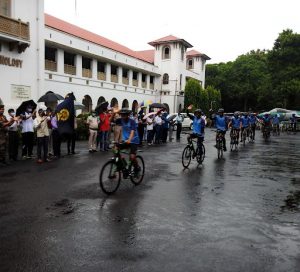