Bay Area Alumni Community of Indian Institute of Technology Kharagpur conducted the IIT Bay Area Leadership Conference 2022 in Santa Clara Convention Centre, California USA  on 27 August 2022. It is a nonprofit organization in California which is dedicated to the professional advancement of alumni from all IIT campuses who call the greater San Francisco Bay Area home. Every year towards the end of the summer, IITBAA organizes the IIT Bay Area Leadership Conference which is open to all IIT and non-IIT tech professionals. The annual conference typically brings together industry & academic luminaries, business leaders, engineers, startup founders, investors to gather and exchange knowledge through a power packed one day program.

The 2022 annual leadership conference held at Santa Clara in California, USA, witnessed participation by over 500 tech enthusiasts. The opening keynote of the conference was delivered by Dr. Arun Majumdar, Dean of Stanford School of Sustainability on the topic of “Future of Sustainability”. Dr. Majumdar, who is the Jay Precourt Provostial Chair Professor at Stanford University, emphasized the urgent global needs of sustainable and clean engineering systems, and compared the domain of sustainable energy as the “Next Computer Science” of the engineering industry. The keynote talk was followed by multiple lightning talks, panel discussions and fireside chats on various topics including AI, Quantum Computing, Electronic Design Automation, Successful Entrepreneurship, among many others. The closing remarks of Dr. T.V. Nagendra Prasad, the Consul General of India, San Francisco, emphasized the future needs of the startup ecosystem of India. 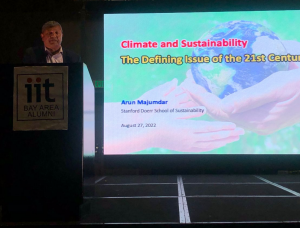 Prior to joining Stanford, Dr. Arun Majumdar served as the Director of the Environmental Energy Technologies Division at the Lawrence Berkeley National Laboratory. He was also appointed as the first Director of the Department of Energy’s Advanced Research Projects Agency-Energy (ARPA-E), USA in September 2009 and serves on numerous advisory boards and boards of businesses, investment groups and non-profit organizations. Dr. Majumdar’s talk focused on the extreme scales of climate change witnessed by planet earth in the past two decades. With the emphasis on rapid increase in human population, he explained the “Tsunami of Energy Consumption” using visual graphs and comparisons with the daily lifestyle of a layman. He proposed a set of engineering challenges as the next-gen challenges of the 21st century which included electricity, HVAC, transportation and water, and multiple engineering ideas to mitigate the current climate trends. In a question answer session with Mr. Arnab Debnath, Vice President of IITBAA, he answered simple pointers which even a regular layman can implement to bring about a positive change. Overall the audience was extremely receptive of his message which ended on a cautious yet positive note –

” We do not inherit the planet from our ancestors, rather, we borrow it from our children.” 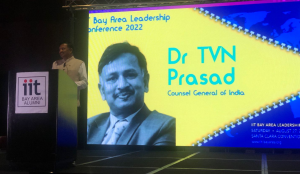 Dr. T.V. Nagendra Prasad, Consul General of India in San Francisco, is a senior diplomat who served at Indian Missions in Tehran, London, Thimphu, Bern in various positions and was Ambassador of India to Turkmenistan from 2014-2018. He gave a motivating speech which emphasized on the topics of Indian startup ecosystem, recent India-US relations and the resourcefulness of the IIT alumni to the nation. He expressed his pride and joy in being part of the IIT Bay Area community and was delighted to speak to a diverse audience at the conference. Dr. Prasad shared the recent developments of India and the nation’s support to USA when India’s first Navy warship INS Satpura recently arrived at San Diego, USA harbour on August 13th 2022 under the aegis of Azadi ka Amrit Mahotsav which was a moment of pride for every Indian. He also emphasized and seconded the need of sustainable energy and environment, and expressed that the growing economy of India should be in this direction. He concluded the talk by encouraging the audience to contribute to the Indian startup ecosystem in every possible manner. 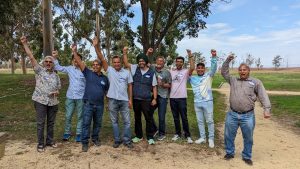 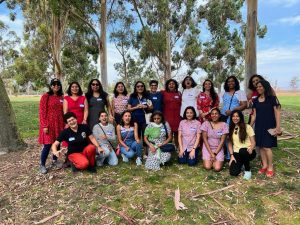 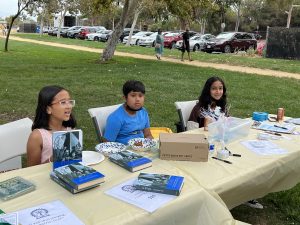 Among such insightful talks by leaders, the conference also hosted a first of its kind Campus Mixer Session. This event was intended as an informal gathering of alumni from each campus to huddle and bond during the lunch time. As the event needed prompt management and outreach, Anshu Agarwal, IITBAA Board Member coordinated with a team of volunteers to take ownership for each of IIT campuses. Arnab Debnath,Vice President of IITBAA and IIT KGP alumni, helped the volunteer Yajat Pandya to connect with local IIT KGP luminaries and drive the outreach of the campus mixer event. Over 55 IIT KGP alumni gathered at the KGP Mixer session and witnessed the presence of esteemed alumni like Mr. Arjun Malhotra, Mr. Prith Banerjee, Mr. Debu Chatterjee, and many others. With the generous support of Mr. Arjun Malhotra, the group was also able to include a unique full-sized IIT KGP flag around this event area. Mr. Prith Banerjee, CTO of ANSYS, talked about his recent book, “The Innovation Factory”. The entire KGP contingent were delighted with this initiative by the conference organizers and look forward to many more events of networking going forward. 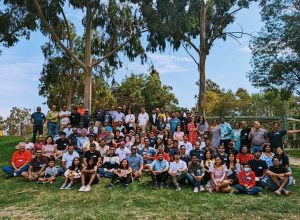