It has been more than 3 months since IIT Kharagpur has been in a lockdown state followed by social distancing norms. When lockdown was announced there were more than 5500 students living on campus spread across 22 halls of residence. Maintaining their hygiene and security following regulatory orders by the Govt. of India, was a mammoth task. While the Institute designated the security, mess, sanitation and health workers towards the campus maintenance, it had another concern to address – accommodating the essential workers and supporting those fearing probable loss of livelihood due to lockdown and limited attendance at work.

At a time like this when IIT Kharagpur under the leadership of Director, Prof. Virendra Kumar Tewari was chalking out its lockdown policies for human resource management, a chord struck with someone thousands of miles away. Vinod Gupta, the US-based distinguished alumnus, entrepreneur and philanthropist, floated the idea to raise USD 1 million to create a temporary relief fund. His goal was to give back in the memory of Papaya, the hostel ward boy who had once taken care of him when he fell sick during his student days. He saw many in the likes of Papaya in these times of distress – those who have been preparing dinner for 12000+ students, keeping their rooms clean, keeping them safe round the clock and many more affected people in the campus neighbourhood. These were more than 10000 people and their families. 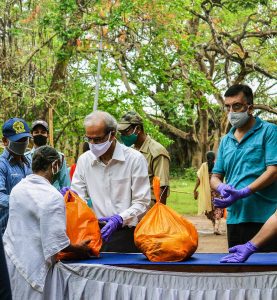 “The thought of giving comes from our connection with the people. At IIT Kharagpur, we have traditionally valued interpersonal connection, not just between a student and his alma mater but with every person we interact. May be because we are a couple of hours away from the city, we get more opportunity to explore inward and create bonds so strong that while conducting our core duties of teaching and research, we simultaneously contemplate on the intense need to reach out to the souls who make our campus liveable. They are our family, an extended one, but without them there is no IIT KGP,” remarked the Director Tewari.

With the IIT Kharagpur Foundation USA led by President Ranbir Gupta conducting the fundraising campaign, by June, Rs. 2.5 crore has been received by the Institute. Among the 800 donations received so far towards this campaign include Arjun Malhotra, R N Mukhija, Rakesh Gupta along with hundreds of alumni from 1959 to 2017 batches.

“One has to see to believe how every step has been planned and executed. In serving the community we lived our institutional motto of YogaH Karmasu Kaushalam,” said Prof. Subrata Chattopadhyay, Dean Alumni Affairs. 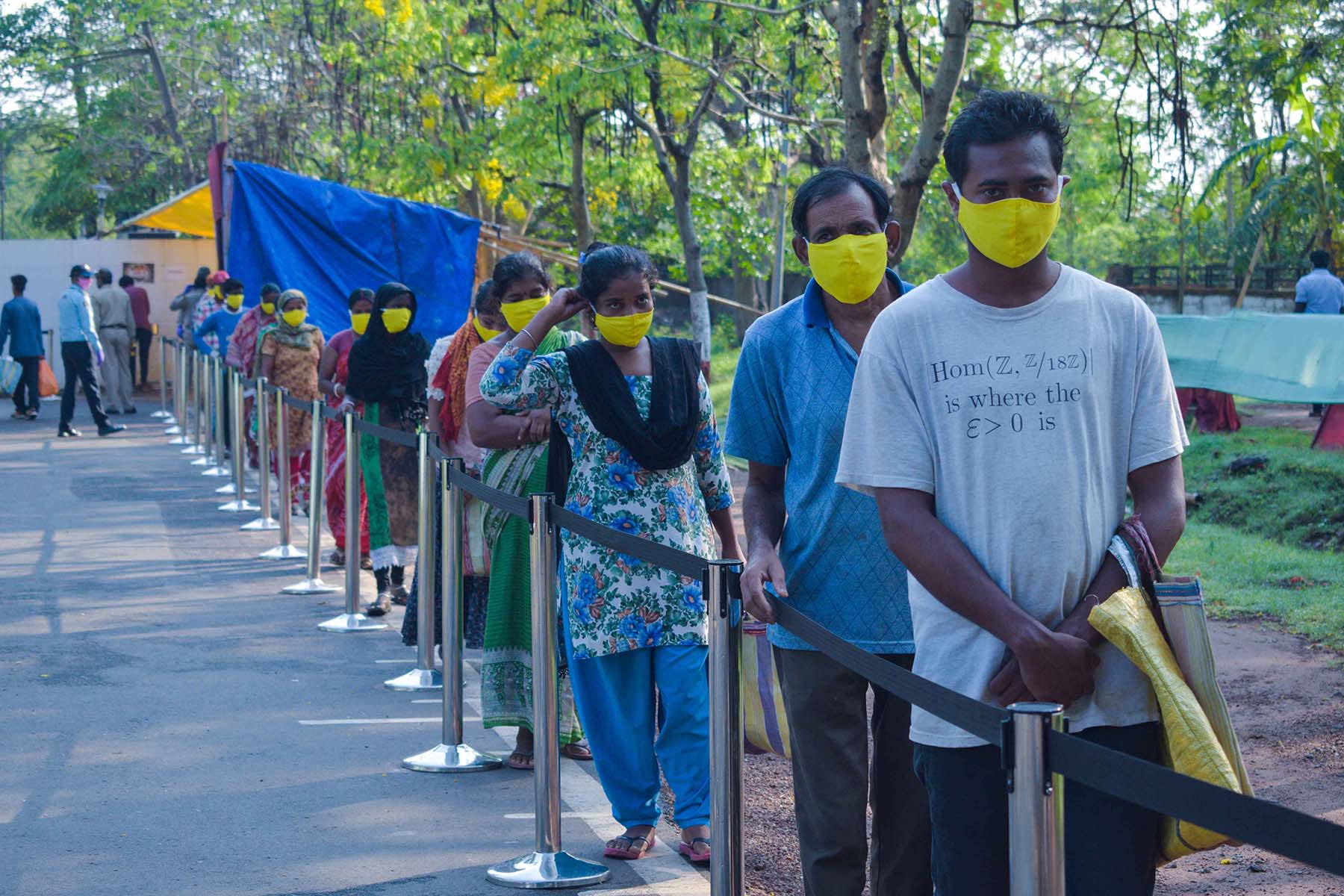 Until now the Institute has disbursed relief and monetary help for close to an amount of Rs. 1.5 crore, towards phase wise relief distribution, fund transfers, hospitality of emergency workers since April, confirmed Dean Chattopadhyay. The beneficiaries include daily wagers working in different eateries, halls as ward boys, dhobi, small culvert tea shops, rickshaw pullers, maid servants, workers in construction projects and many others in the area. In a novel gesture, the Institute reached to the aged and physically disabled people in the campus neighbourhood even though they were not engaged in any activity in the campus. They belong to the strata of the society who depend on alms and charity at public places and are unable to seek help under current circumstances.

Another key initiative taken by Prof. Tewari is direct to bank transfers for the essential workers. Each worker received an additional bonus of Rs. 3,000/-. More such fund transfers have been planned in the coming months. The Institute also covered the expenses incurred by the essential workers towards fooding and lodging during the lockdown period.

“The essential workers took up the responsibility to keep our home safe by staying away from their home during a time when we all were advised to ‘stay home stay safe’. Accommodating them in our campus, taking care of their stay and health, was in the spirit of IIT KGP,” said Prof. Tewari.

Close to 1200 workers serving as security personnel, hostel mess, sanitation etc. were accommodated in the campus guest house and halls of residence. 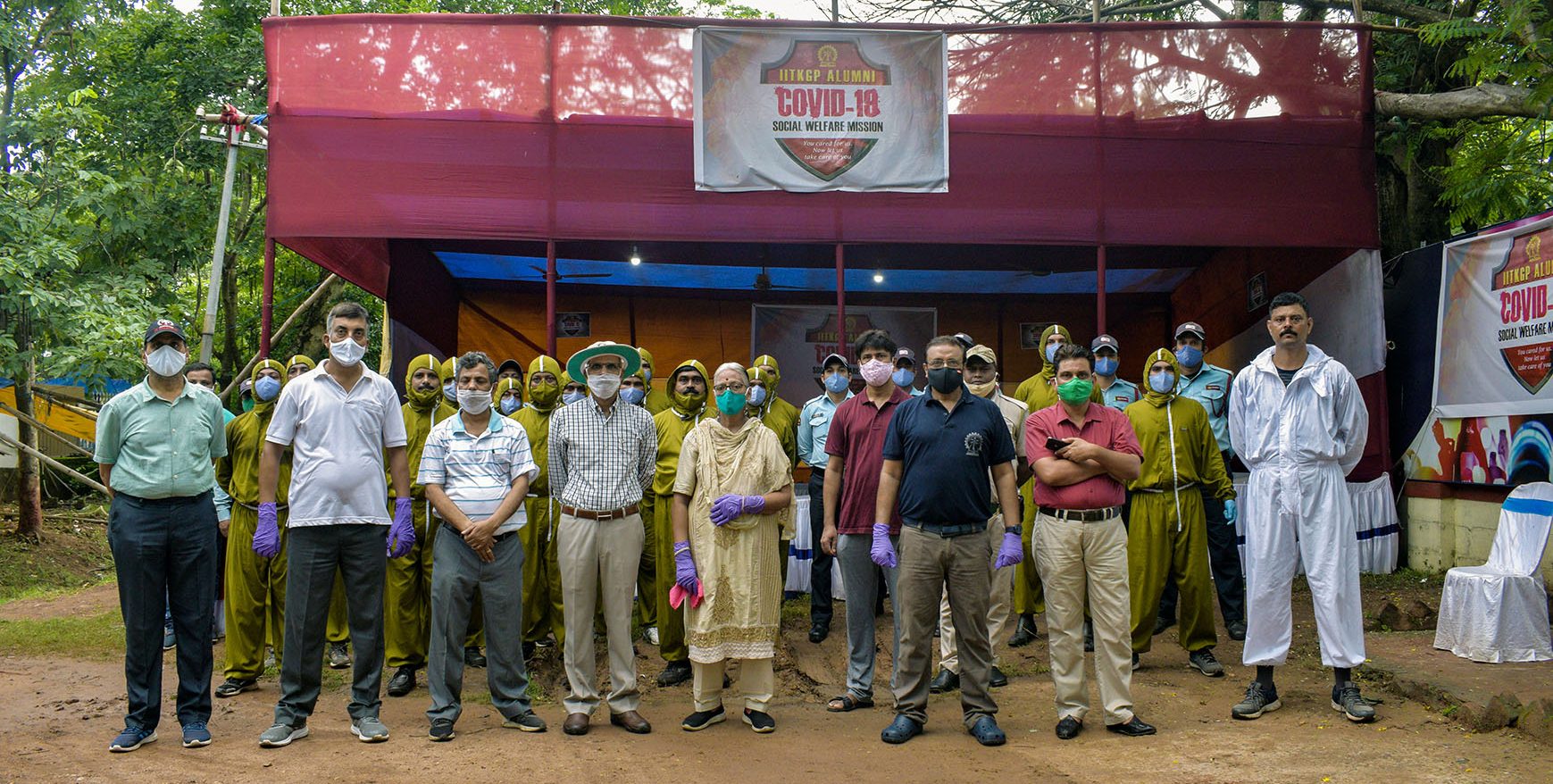 Subhojit Adhikari who has been working as a security personnel at the Institute felt immensely proud to be of service to the nation at these trying times.

“I have been away from my family and home for over 3 months now but I feel so honoured for being appreciated by the students, alumni and Institute authorities,” he said.

Many of his colleagues along with him were on emergency duty and were given a bonus of Rs 3000/- for their relentless service along with on-campus accommodation. 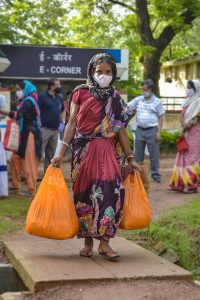 An elated Bina Awasthi who has been working as a domestic help at the IIT Kharagpur campus for more than three decades said,

“Can you imagine that someone by the name Vinod Baba from far off America is thinking about us? IIT Kharagpur has been my home since my father was a guard here. I am so glad that the Institute authorities and Director Sahib took care of us at a time like this. We got adequate quantities of ration and even vegetables, soaps and other supplies which lasted for 15-30 days. My son who is working in the mess, was accommodated there itself and was given an additional Rs. 3,000/-.”

Meanwhile the campus market which was partially affected in a fire incident was quickly renovated and the shopkeepers were reinstated.

The fundraising campaign is going on with full vigour and alumni from across the globe are pouring in their purses. The alumni community in the USA aims to raise about Rs. 8 crore to help the unsung heroes of IIT Kharagpur campus, said Vinod Gupta in one of his messages to the alumni.

Director Tewari has further urged the alumni community to support this noble cause.

Talking about giving back he said, “The campaign is being appreciated by sixty thousand people who are associated either as donors or benefactors or by means of their association with IIT Kharagpur. Recently, Dr Ramesh Pokhriyal, Honourable Minister, Human Resources Development, Government of India acknowledged our efforts on his social media. We are aiming to raise enough funds to roll this campaign till the end of this year. I call upon every Kgpian to reminisce the days at the halls of residence and the mess dada’s smile, the adda at the night canteens and the faces who served you that cup of tea and paratha.”