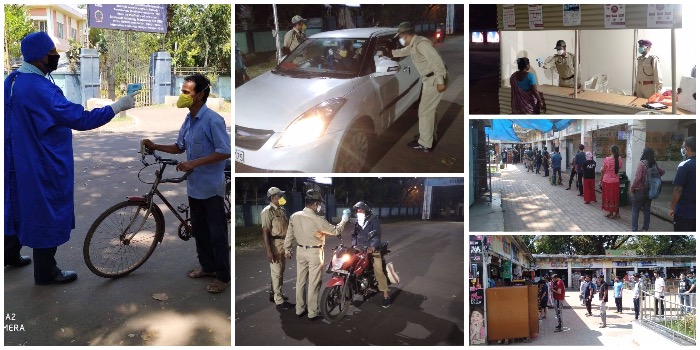 In light of a recent article published in a local daily ‘The Kharagpur Post’ that accuses the institution IIT Kharagpur of not abiding by the laws of the nationwide ‘Lockdown’, certain criterion and situations ought to be made clear, and brought to public notice.

As almost every citizen of the country is well aware; the dangerous COVID-19 pandemic has spread it’s shadows worldwide, and therefore is the cause of much uproar and overwhelming peril. Hence health officials all over the world have called for SOCIAL ISOLATION to be the only salient preventive measure to protect people from getting infected. As the crisis has reached our country too, Our Horourable Prime Minister, only 3 days ago had issued an order for a Nationwide Lockdown, and very rightly so, to propagate isolation, safety and prevent community contact as far as possible, to reduce the risk of infection.

Like all other educational institutions in the country, IIT Kharagpur too had suspended all its classes since 13th March 2020 in direct contact mode and resorted to online mode to the extent possible. Moreover, the institution had also put forth a voluntary option to the students to leave campus, if they wished to do so. Out of an approximate populace of 13,000 students in total, as per recent report, about 5,500 students were still residing in-campus till the 24th of March 2020, the midnight of which saw the issuance of the 21 day nationwide lockdown order.

Therefore, with the entire transport system of the country shut down and movement of vehicles immediately banned, it was neither safe nor justifiable for these students who all originally reside in different parts of the country, to avail any sort of transportation to reach home. In a crisis such as this, it was imperative on the part of the home institution to safely house these students who now were to stay back in the IIT campus. Our Honourable Prime Minister had very strongly highlighted the fact while announcing the said lockdown notice, that the people of the country were to stay put at the current respective locations and not move anyhow to other places during these 21 days. So, as per the MHRD directives, IIT Kharagpur had kept open its hostels and associated food supply, presided by the Hall Management Centre(HMC) and HMC run private vendors to provide and facilitate the students in the hostel, in-campus. To cater to this situation, the hostel workers living  outside the campus have been given an issued card each so that they may be able to enter the IIT campus and hostel premises to provide the necessary emergency services, but only after being subjected to a health screening at the campus entrance by the stationed security personnel as per the laid down procedure issued by MOHFW, GOI and WB Government time to time.

In this context, an isolated incident, wherein a hostel worker, found to be in the state of  intoxication, was censured by the police and stopped from entering the campus, which by no means can be classified under ‘public heckling’ of any sort.  However, the Institute administration has written one letter to the District administration regarding continuous supply of essential goods and service and also requested for permission and safety of our Mess workers who are coming from outside for essential duties such as sanitary, hospital, mess, water works, etc. The District administration has assured us for the same. No such incident has been reported so far.

IIT Kharagpur has taken all the precautionary measures to ensure the safety, security and well being of it’s students and residents in-campus, in these perilous times. The institute has kept open only one of its entrance gates where very few people are allowed to enter, that too after all possible precautionary screenings. The students residing in-campus under hostel confinement, are not allowed to set foot outside and are strictly maintaining the protocol of ‘social distancing’. Also, all the shops selling essentials in the in-campus market have been kept open for stipulated hours, and the crowd is efficiently regulated maintaining the ‘social distancing’ rule.

Henceforth, the article published in the ‘Kharagpur post’ that accuses the students of not abiding by the above mentioned safety protocols,  the institute for not being vigilant about the security and safety of the hostel workers and residents, and, that blames the institute to be responsible for the so called ‘public heckling’ situation, cannot, and does not hold true in any sense, given detailed proof that IIT Kharagpur is associated with no such situation to deserve the malignment thrown at it.

Also, on an important note, the institute has given the unwilling HMC staff, permission to not come and attend to the situation in spite of the reigning emergency. Furthermore, the institute has also declared that all the HMC staff and workers will be paid their complete salary in their period of absence from this emergency /essential duty and will be paid salary/wages as the case may be in time during the period of lockdown.

IIT Kharagpur has tried to the most of its ability to provide and protect its students, residents and workers, by taking all the necessary precautions and security measures as is the demand of the hour as advised by the MOHFW and WB Govt. issued from time to time, in this unprecedented pandemic situation and will continue to do so, to the best of its effort, in the future in accordance to all the rules issued by the Government of India.