What’s with a fallen star?
Blazing past where loved ones are
Close to earth, searching far…

Closing eyes in heavenly prayer
For flames burn out in the shallow air
God lights the way where angels glow
With streaking stars of love that flow
Loved ones who completed your life
Reminiscence your memories to survive
God sends this message from a far
Down to earth, close to where you are
Worthy Warrior, fighting the battle for life
Praise the fortitude with every extra mile
Night stars will shine high
Bright streak will stream through the night sky
Good awaits you, for you said the toughest adieu
You bid him hello and the world a good bye.

Bidding adieu to Mr. Rajiv Sinha (ECE/69-74), an Alumnus of IIT Kharagpur, who left his heavenly abode on 28th August 2022. A B.Tech from IIT Kharagpur in Electronics & Electrical Communication Engineering from the batch of 1969, he completed his MS in Computer Science from Columbia University, New York. 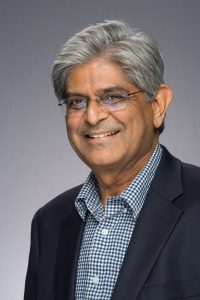 Mr. Sinha endorsed specialized skills in the domain of Cloud Computing, Enterprise Software, Distributed Systems, SAAS, Virtualization, LINUX, Scalability, Product Management, Application Security, Network Security, Agile Methodologies etc.  He worked in both large corporations and in startups  across United States of America. In 2004, he became the Vice President of Engineering, Networking and Analytics at Citrix Systems and along the way, he co-authored and published numerous patents which are testaments of his professional excellence in engineering. Before joining Citrix, he was Vice President of Engineering at Netli, Inc. in 2003 and NetScaler Inc from 1998-2002.  Prior to this, he was also Director, Software at Unisys for 6 years and Harris Computer Systems for 7 years respectively. 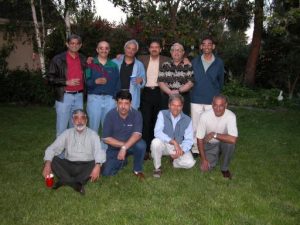 Looking back to the days they spent in IIT Kharagpur, Mr. Roy Da Silva (EE/74/RK) wrote – “Rajiv Sinha was my batch mate. We met as freshmen in IIT Kharagpur in 1969 and we graduated in 1974. Rajiv grew up in Rourkela and around other steel cities in India. He went to St. Xavier’s High School in Hazaribagh after which he joined IIT KGP in the ECE Department and was a resident of Nehru Hall. I grew up in Bombay and was in the EE Department and an RK-ite. We had a common friend Ravindra Nair, also in the ECE dept and an RK-ite who went to the same school as I did in Bombay . He was the one who was responsible for connecting us.

Ravi and I stayed in the same wing of the RK Hall (C-West Ground) during our freshmen year. Rajiv was Ravi’s lab partner who stopped by his room occasionally to “compare notes” (topo-ing describes it more precisely), and it was at one of these visits that I met Rajiv. This was the start of a friendship that lasts for more than 50 years and counting, between the 3 R’s… Ravi, Raji, & Roy. Ravi was awarded the Presidents Gold Medal and came to University of Illinois at Urbana-Champaign for his Master’s. He then went to work for IBM and I did my Master’s in Business from Bombay and worked in India. Then I migrated to Silicon Valley in 1984. Rajiv had come to Columbia University and then started his first job at Harris in Florida. We had not been, in touch with each other during that time. I again reconnected with Rajiv in 2000. He had come to Silicon Valley from the east coast in 1990 and we quite accidentally discovered that we were neighbors, living just a mile away from each other. We met on a number of happy occasions; the most memorable being at a “Reunion of 1974 RK Hall Wing mates”, that took place at my house in 2003. Neither Rajiv nor Ravi was told that the other would be present at the same reunion and when they did meet face to face, it was totally an electrifying experience. Both were ecstatic to reconnect as they had not seen each other since 1974. We connected years later in Silicon Valley. All was well till about a year ago, when Rajiv was diagnosed with colon cancer which had already spread to his liver. Three different regimens of chemo that did not work led to him being placed on experimental drug treatments which was being administered in San Diego. I and Rajiv along with our spouses Viola and Savita, were supposed to have tea together in early September. But that was not to be. He took a turn for the worse and was admitted to the hospital and on August 28, 2022 Rajiv lost his battle with cancer and passed away. 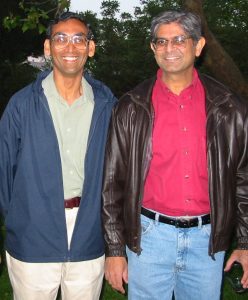 Arjun Malhotra and I have known each other since I was a freshman at IIT Kharagpur. Kiran, Arjun’s wife and Arjun are also friends with Rajiv and Savita. He encouraged me to write Rajiv’s obituary for publication in The KGPian. I felt that this tribute to Rajiv would be so much more meaningful if I could get some of his closest friends to say a few words, so I reached out to them to say a few words in his remembrance. On behalf of the entire KGP family, I take this opportunity to convey our deepest condolences and empathy to Rajiv’s mother, mother-in-law, his wife Savita and children Viraj and Nikita. 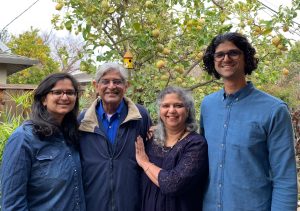 Rajiv with his family

“Rajiv, we will miss your intellect, humility, mischievous smile, and sense of humor that made you such great company. RIP my friend.”

“Rajiv, a partner in most of my labs at IIT, will be remembered as an extremely intelligent person, articulate with his words, yet humble in his demeanor, generous with his ideas, and encouraging in his friendship. Oh! And I can’t forget that occasional mischievous humor that he often used to defuse a tense lab situation. Labs at IIT were notorious for being complex, but Rajiv made them fun!”

“Rajiv was a fellow who helped in all literary activities without reservation, who was cool and unbiased in all his views, who stretched out a helping hand whenever the hall was in need, who kept his cool when others blew their tops, who felt the hall was his and he was part of the hall – what talent he has shown and may he put it to good use in his life.…….”

“I will remember Rajiv for his vast knowledge on multiple subjects, as a voracious reader, an absorbing storyteller, and a good listener. Above all he came across as a total gentleman and was a very caring friend. He will be sorely missed.” 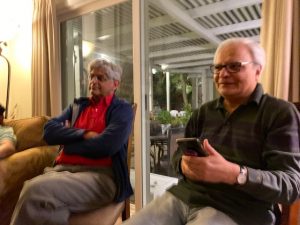 In remembrance of the “Unforgettable Soul”, his Alma Mater mourns in sadness after hearing the news of his demise. Our sincere condolences to his bereaved family. May almighty give enough strength to his family to bear this irreplaceable loss. We pray for eternal peace of his departed soul. He will always be remembered in our thoughts, prayers and action.