An IIT Kharagpur study confirmed recently that the intensity of urban heat islands is positive in most cities (up to 2°C) in all seasons during day and night. The researchers from the Institute’s Centre for Oceans, Rivers, Atmosphere and Land Sciences (CORAL) and Department of Architecture and Regional Planning have found that most big cities of India with population more than one million, have positive heat island intensity during daytime while simultaneously showing an increasing trend in the nighttime urban heat island intensity. The study ‘Anthropogenic forcing exacerbating the urban heat islands in India‘ has been published in the international Elsevier publication Journal of Environmental Management (https://doi.org/10.1016/j.jenvman.2019.110006) . 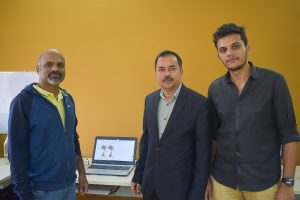 The increase in global surface temperature or global warming is a great concern, especially the Urban Heat Island (UHI) phenomena which is among the major consequences of the alteration of the earth’s surface due to human activities. The relatively warmer temperatures in urban areas compared to their suburban areas has potential health hazards, such as mortality due to high temperatures and heatwaves, and pollution in urban areas, opine the researchers Sarath Raj, Prof. Saikat Kumar Paul, Prof. Arun Chakraborty and Prof. Jayanarayanan Kuttippurath. 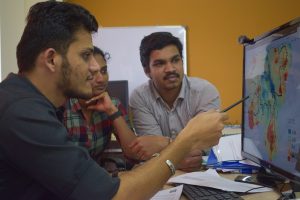 The key finding in the study is the role of anthropogenic activities in increasing the urban temperature in India. As per a World Bank report, approximately a third of the total population in India (~7% of the total world population) lived in cities in 2018. The trend shows an increase of urbanization by almost 4% in the last decade, meaning people have moved away from rural areas to find work and make a living in the cities. To accommodate the additional needs of this increasing population the cities have witnessed some of the major human activities pertaining to changes in land use and land cover through a decrease in green cover, increase in impervious surface area and infrastructural development. In addition, the UHI situation demands more energy (e.g. fans and air-conditioners) that would trigger greenhouse gas emissions. These have led to modify the temperature of a city, remarks said lead author of the paper Sarath Raj.

“Our study is a detailed and careful analysis of urban heat islands of India which is the difference between urban and surrounding rural land surface temperatures, across all seasons in 44 major cities of India, for the period 2001-2017. For the first time we have found evidence of mean daytime Surface UHI Intensity (SUHII) going up to 2 °C for most cities, as analysed from satellite temperature measurements in monsoon and post-monsoon periods,” said Prof. Arun Chakraborty. 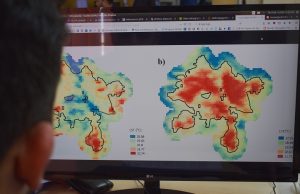 These data are also supported by the analysis of aerosols, night lights, precipitation and vegetation in the study regions. In areas like Kolkata, Pune, Guwahati etc where the urban areas are surrounded by large vegetated areas in suburban regions there is an enhanced cooling effect on surface in suburban areas during day as against cities like Delhi, Jaipur and cities in arid regions.

“Evidence from our study suggests that more green spaces within the city and its boundary could reduce the temperature in the city and its neighbourhood. Conservation and expansion of vegetated areas, and preserving water bodies in and around cities could be an effective strategy to curb the effects of urban heat islands. The construction of green buildings and selection of materials for buildings and other infrastructure such as eco-friendly materials could also prove to be crucial to mitigate the effects of heat islands,” said co-author Prof. Jayanarayanan Kuttippurath.

An earlier study published in Scientific Reports journal in 2017 had pointed out the correlation in UHI and the location of the smart cities proposed to be developed. In a global warming context, because the temperature is increasing across the latitudes, the background warming could add even more heat in the urban areas. Therefore, anthropogenic activities that augment the greenhouse gas emissions and atmospheric pollution should also be controlled to counter the adverse effects of urban heat islands. Keeping in mind India’s strong commitment towards the Climate Action, despite focus towards urbanization, such studies shall aid the planning and management of urban areas by giving insights about the effects of nature and intensity of development, land cover and land use mix and the structure of future smart city projects.