The Director, Prof. Virendra Kumar Tewari, in his message, assured that IIT KGP will always side with those in need of help and continue to support the community workers through these unprecedented and distressing times. He also said that it was a great opportunity to give back to a section of the community which has been an integral part of the IIT Kharagpur story through thick and thin. 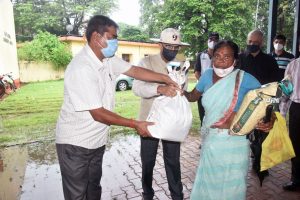 Ration and essential commodities worth 1250 INR were distributed to each person. AAADHAR card data was used to ensure that everyone gets their share and no one misses out. The Assistant Registrar of Establishment and Personnel, Mr. Animesh Kumar Naskar, who was overseeing the distribution event informed that the relief camp received very encouraging responses from the community. He also mentioned that the institute is planning to distribute some select items in a donation drive before the autumn festivals and possibly the 8th round of relief distribution by the end of 2021.

The Director’s message was echoed by Dean Outreach, Prof. Jayanta Mukhopadhyay. He said that the IIT Kharagpur is powered by the philosophy of an open campus; that despite walls and gates, the campus is committed to its neighbouring society and its betterment. 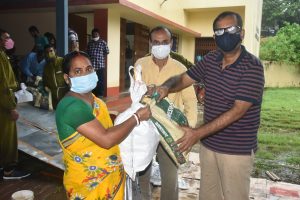 The institute lauded the contribution of the IIT Kharagpur Foundations across the USA, UK, and India for realizing its social commitments. Their grand humanitarian gesture of donating USD 1 million and Oxygen concentrators without second thoughts, was an indication of their deep emotional connection to the people who moulded their student experience significantly.

Many of the aid recipients, especially those from the older generations who have been part of the IIT story for many decades, were swelled with a sea of tears on learning how former students have been their pillar of support through these unpredictable and harsh times. 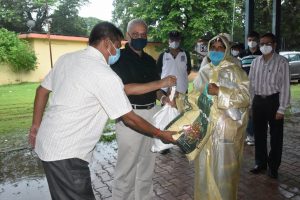