February 28 was the day C.V. Raman went to the media to disclose to the world his discovery of the ‘Raman effect’. What better way to celebrate National Science Day, as this day is known, than re-energize the bond between the scientific community and its messengers and interlocutors – the media? That is precisely what IIT Kharagpur’s two-day Science Communication Conclave 2020 has done. This unique initiative of the Institute brought together top science journalists and communicators throughout India, researchers, faculty and students to deliberate on how best to disseminate news from the world of science and technology.

In his address to the audience, Prof. Sriman Kumar Bhattacharyya, Deputy Director, IIT Kharagpur, pointed out, “National Science Day is a reminder of the importance of science dissemination and it should be done by any means possible.”

Was this task of dissemination of news related to science and technology anyway being jeopardized by scientists’ reservations about opening up to the media? Were journalists jeopardizing the intent and purpose of communication in their hurry to ‘break news’? Is scientific jargon serving as a barrier to the correct representation of scientific developments? Is science news becoming less popular? Could there be ways to spur its popularization?

The congregation of mediapersons, scientists, as well as students took a hard look at the issues at hand. Prof. Baidurya Bhattacharya, Dean, International Relations, convenor of the event, set the tone by opening the conclave with a presentation on the development of cloning technology that at once highlighted the follies and expected rigour of reportage on a scientific development. “There is an enormous need to disseminate factually correct information and at the same time to live up to the demands of the media industry,” said Prof. Bhattacharya.

For some years now, science news have taken a backseat in traditional media. Supplements dedicated to science have been dropped and science news have shrunk often to half a page being devoted to it. Senior journalists, such as Ms. T.V. Padma and Mr. Dinesh Sharma, highlighted the problems facing science journalism today – organizationational constraints of the media houses who were dependent on advertisements, the preference for ‘breaking news’, low priority for science news vis a vis political news and news from the world of entertainment, the lack of mentoring of science journalists, the lack of infrastructural support or of networking bodies.

They also drew attention to what they called ‘communication bottlenecks’ with the scientific community that were adding to the troubles. Often, scientists’ unwillingness to publicly communicate on research and the lack of an institutional policy on communication complicated matters.

Despite the drawback, senior journalists such as Mr. Pathik Guha (Anandabazar), Mr. Amal Sarkar (Ei Samay), Ms. Padma, Mr. Sharma, Mr. B.R. Srikanth, and a younger crop, such as Mr. Mohamad Shafi Shamsi, Mr. Indrajit Kundu, Mr. Sujoy Dhar, or Mr. Shwetank Dubey, were making all out efforts to encourage public interest in science through innovative ways of story-telling or through the use of more visual elements such as infographics.

In fact, alternative media appear to be making a major advance in this respect by opening up ways for better and more impactful science communication. “We live in the times of ‘convergence media’,” remarked Mr Sujoy Dhar, correspondent for Reuters in Kolkata and a writer for Inter Press Service (IPS), pointing to the enormous advantages of online news dissemination.

Ms Satarupa Sen Bhattacharya, National Editor at Citizen Matters, an online civic media platform that researches and reports on critical urban issues, pointed out, “Online has a lot of space and can also experiment with different formats. It is a foregone conclusion that videos, podcasts and photoessays have a lasting impact and can catch a readers’ attention further.”

Ms Sahana Ghosh, staff writer with Mongabay, an international science news website, said, “With sound graphics, infographics, and other visuals, a story can be told in a wonderful manner. There is also scope for collaborations and cross-disciplinary work. The advantage for scientists lies in the fact that we can create high impact small packets of information and these are easy to digest.”

The conclave also showcased the works of two science communicators with a difference – Ms Ipsa Jain, currently a Postdoctoral Fellow at the Institute of Stem Cell Biology and Regenerative Medicine, Bengaluru, who uses art and aesthetics as a vehicle for storytelling, and Lipsa Panda, currently working as a visual research communicator for the Lancet and FT commission, who also holds a PhD in Respiratory Immunology from CSIR- IGIB, Delhi. “Science cannot be breaking news but it has to be disseminated. A quick check and you will see that newspapers have 20 million readers, but Facebook has 2.9 billion, and YouTube 1.9 billion…. These are the platforms through which you can bring awareness about what kind of research you are trying to do, and this awareness can create interest so the audience will eventually demand to read science news,” argued Lipsa at a panel discussion on the ‘Role of alternative media in taking science to a wider audience’.

The poster exhibitions of the work of Ms. Jain and Ms. Panda at the conclave, which drew a lot of attention, clarified their point even better.

How could the scientific community help the media in its efforts for wider news dissemination? The discussions at the conclave seemed to suggest a few ways.

For one, greater cooperation between scientifists and mediapersons. “Remember, we are not adversaries. We need each other to take the news of science to the people,” said Prof. Pallab Dasgupta, Professor at the Department of Computer Science and Engineering, who was also panellist at the discussion titlted “Lab to media – bridging the language gap”. 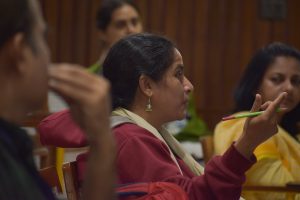 A greater interaction with mediapersons, in fact, had helped both Prof. Abhijit Mukherjee, renowned hydro-geologist and Associate Professor, Geology and Geophysics, and Prof. Bhargab Maitra, a noted expert in urban planning and development, and transportation and Head of the Ranbir Chitra Gupta School of Infrastructure Design and Management and Professor at the Department of Civil Engineering at IIT Kharagpur, to make an impact at the level of policy-making. Both of them pointed this out during their talk at the conclave. 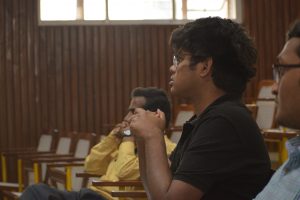 Another way that emerged from the discussions was training scientists and researchers on public communication. Several among IIT Kharagpur’s faculty acknowledged the need for it to ensure correct reportage of scientific developments. Some like Prof. Suman Chakraborty, Professor at the Department of Mechanical Engineering and Dean of the Office of Sponsored and Industrial Research Consultancy at IIT Kharagpur, had already started the initiative by asking his students to put down their research work in the simplest possible language. “The more effective the communication, the more effective the way the journalist can disseminate the news. In fact, this kind of training is part and parcel of advanced research for students around the world,” said Prof. Chakraborty.

As Prof. Sunando Dasgupta, Professor at the Department of Chemical Engineering and Head of the Advanced Technology Development Centre, IIT Kharagpur, pointed out, “Science is a process of inquiry. You cannot expect breaking news to happen on a daily basis… For example, there can be no breaking news in cancer cure. It is an ongoing work and the steps that we take are at best incremental. But yes, scientists need to explain what they are doing. However, they are not trained to communicate what they are doing.”

Prof. Partha Pratim Chakrabarti, former Director of IIT Kharagpur, left a lasting impression with his concluding talk on Vigyan Katha Sagar, his proposed mission to take science to school children through Next-gen stories that embed principles of modern science and technology and enable critical thinking. Prof. Chakrabarti wrote, “The talk was inspired by the timeless masterpiece – Kathasaritsagar and its immense potential for a revisit. I illustrated the untapped power of simple age-old stories like Thirsty Crow in modern light and gave a sample of some of my own initial attempts at story-telling on problems solving and algorithm design meant for school students. Request others to share their ideas and possible stories.”