A team of three students from the Department of Architecture and Regional Planning of the Institute has clinched the first prize at the ‘National Competition for Students 2019 for the Best Innovative Use of Steel in Architecture’. The competition was organised by Institute for Steel Development & Growth. INSDAG, an organization established by the Ministry of Steel, Government of India, which has been hosting this competition since 1999-2000, intends to promote and create an awareness of the use of steel in building design among students. 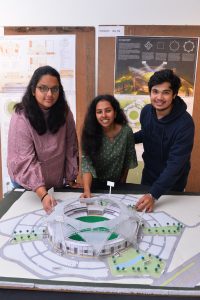 Mudita Kumar, Ananya Singh Parmar and Anuranjan Singh, the winners of the INSDAG contest, are final year undergraduate students of the Department of Architecture and Regional Planning. This is the third time that the Department is securing the first position in the competition, having earlier won the top prize in 2014 and 2017. It may be mentioned that the Department was adjudged the best in Architecture by NIRF for the last two years.

Three teams from IIT Kharagpur’s Department of Architecture and Regional Planning made it to the finals held at Kolkata earlier this month. A total of 16 teams were selected for the finals from four zones of the country by the zonal selection committees. The teams were evaluated for the finals by the Jury members consisting of renowned architects and faculties from the academia. 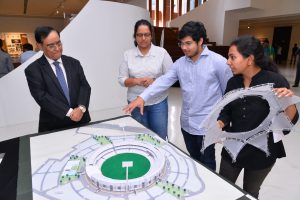 The call was for designing a cricket stadium with a seating capacity of 45,000 apart from a space for a cricket academy. As a concept of the winning design, the team came up with a structure made up of eight arches. “Intersections of these arches help in shading the concourse and permitting ventilation as well. They also help in creating recognizable entry points, helping different types of users in way-finding. The octagonal periphery formed by the arches also supports the extended roof which converges to a circular periphery,” said Mudita Kumar and Ananya Singh Parmar of the team.

“All this makes the design iconic and landmarks the city for its heritage,” added Mudita. In fact, cultural integration and creating a landmark to foster a sense of belonging among all users were among the major concerns of the team which looked at Ghaziabad’s tortuous history down the ages. “Efforts were made to create a unique outlook of stadium in context with the city of Ghaziabad for which the citizens can take pride in. At all stages of design development, our prime focus on user behaviour, safety and convenience helped us come up with this user sensitive design and helped us win,” said Anuranjan Singh. (Read Anuranjan’s interview to KGP Chronicle)

Dr. Sumana Gupta, Assistant Professor at the Department of Architecture and Regional Planning mentored the student teams. She said, “Architects through this exercise exploit use of steel in different forms. Their expression is totally innovative. The motto of the contest was to assess how well steel was being used, not merely to express its ability to take tensile or compressive forces but to demonstrate how innovatively this fluid material can be used to give shape to the architect’s thought. The problem statement was also assigned as a studio task for the students hence there was continuous monitoring and participation was intense and wholehearted.”

A second team of students consisting of Gunjal Jain, Runjhun Goswami, Gauri Pathak and Aman Yaduwanshi missed the third prize by a whisker. They, however, earned a “special mention” from the jury. Talking about their project, Gunjal said, “We wanted our stadium to be a symbolic representation of playful contemporary India. So the form had to be modern, yet relatable to the people.” Her team members thus designed the stadium together with “3 green breathing spaces” around the stadium. “The entire origami structure around the green spaces was extended outward to form shade above this area, creating a beautiful play of light and shadow below it. This is what made us stand out of all other teams,” explained Gunjal.

The third team who qualified the zonals consisted of Preetish Priyadarshi Nayak, Aman Kumar Agarwal, Atul Singh, Keshav Kumar. Although they did not win a prize, their design was much appreciated by Dr. Gupta for being truly innovative.