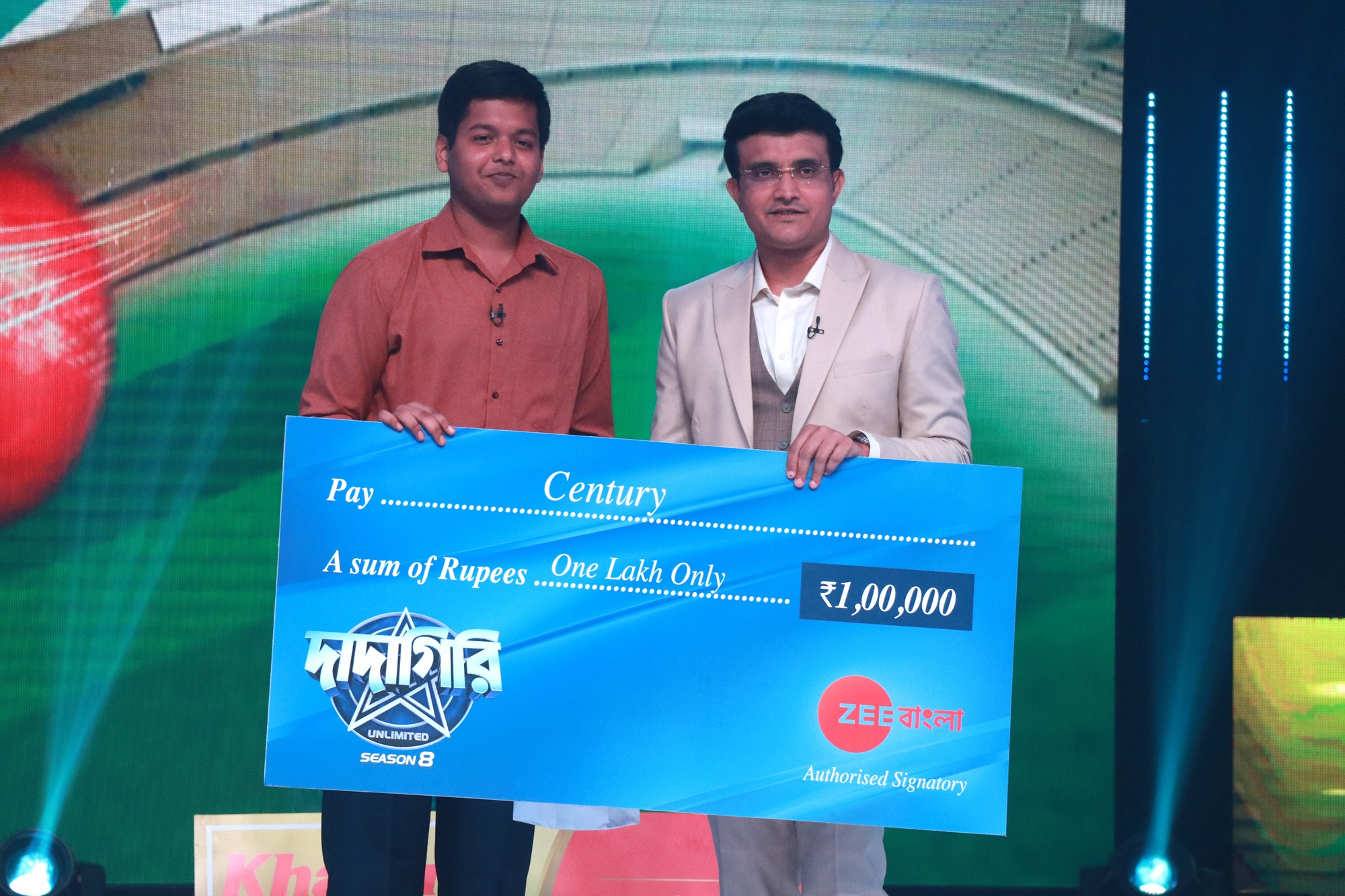 Zee Bangla Dadagiri, a unique quiz show hosted by former Indian Skipper Sourav Ganguly kicked off in 2009. Since then, the show has completed 7 successful seasons and today, 10 years later, it steps into its 8th season. There is something very special the opening episode of Season 8 of Dadagiri. Piyush Kedia, a 4th year UG student at the Department of Metallurgy and Materials Science at IIT Kharagpur and an Uttarpara resident, representing Hooghly district, participated in the episode. He won with 109 points. He battled it out against 5 participants from different walks of life and districts of West Bengal.

IIT Kharagpur has more than one reason to celebrate.

As Piyush walks into the office of the Alumni Affairs and International Relations, rain-soaked and clueless about who to talk to, I extend my hand, congratulating him on striking a century and winning the maiden episode of Zee Bangla Dadagiri Season 8.

I lead him away from a chilly office, lest he shivers to the bone, to a comparatively warmer enclosure and we begin a freewheeling chat.

“How was your experience like?” I asked him. Gushing, he replied, “It was great. I got to meet one of my favourite cricketers – one I had adored since childhood. It felt great to represent the college at such a prestigious stage. Representing a district and its people was also a huge matter of pride.  To have so many people backing me up for this was wonderful.

Since it was a dream-come-true moment, the days passed in a blink and I was starstruck the whole time. However, here I would like to point out something. There are a lot of speculations people have regarding these kinds of shows being fixed and much malfunctioning occurring behind all the glitz and glamour. I, however couldn’t find any of those and that made me very glad. I wish to make my district and parents proud if I get the chance to attend the grand finale of this show.”

His parents and younger brother accompanied him to the show.

For Piyush who had been actively following the show since its inception in 2009 as part of his routine, even at times till late nights, the path to the Rajarhat set was not an easy one. As a 15/16 year old, he had queued up for auditions for a good 3 / 4 hours at the nearest audition venue every year, only to be disappointed each time. So, for him, it was surreal when the Zee Bangla Team called him for the Season 8 auditions and to finally step up on the sets, was the culmination of his patience and a far-fetched dream.

His appearance conveyed that he knew what I was to ask him next. He was perhaps eagerly waiting for this question. So, when I finally asked him, “How was it meeting Sourav Ganguly?”, words seemed to fall short for him. “I was starstruck and overwhelmed. I had lined up to meet him for his autograph during a football tournament when young but could not get up close to him back then, so this was one huge opportunity. It felt wonderful talking to him and getting a pat on the back. I cheekily asked him if he would agree to be Team India’s coach, which he gracefully avoided answering.” replied the super-excited Metallurgy student.

There was a time in the game where this boy scored the lowest and had chances of being eliminated. “What was going on in your mind at that time?’, I asked him. He thought a little and said that being a quizzer himself, he knew that the last two rounds were oriented towards quizzers and could reap high benefits. “My target was to somehow survive till the last two rounds and I was confident I could take away the game from there,” he said. His dream to hit a century came up with the last question.

As a regular 21/22 year old, unfazed by finances, Piyush is no exception. He plans to hand over the entire prize money to his mother, leaving her to decide on its fate. The trophy, however, is one thing he would love to keep for himself. He intends to stay actively connected to quizzing throughout his professional career, but presently, he would like to concentrate on his research project.

There were a few pointers Piyush picked up from the show. The most difficult part of the game, he points out, was to maintain calmness throughout, adding, that participants are required to be steady yet fast and need to think analytically.

His concerns showed up as our conversation took a turn towards the contemporary scenario of quizzing. Piyush promptly pointed out that moving towards content creation in quizzing was a normal phenomenon, which is somewhat derivative of the original sport. However, with very few good quizmasters around, taking up quizzing was a feasible career option for him, but not a lucrative one though. “If it is sustainable, then I think I might take it up professionally. It is a matter of love for me,” he said.

“How popular have you become in college, hostel and otherwise?”, I asked him. The perplexed expression on his face told me that the excitement and adulation from all was still about to sink in. “It feels really good to be popular and have well-wishers in the district. Not much of fan following that way, but the professors at college now know me”, adding, “my hallmates at RP Hall are very excited. I’m getting a lot of requests on Facebook right now, but haven’t really acted upon that. It feels good when people recognize you for what you have done,” he replied, brimming with joy and excitement at achieving a score – half of which most participants fail to reach.