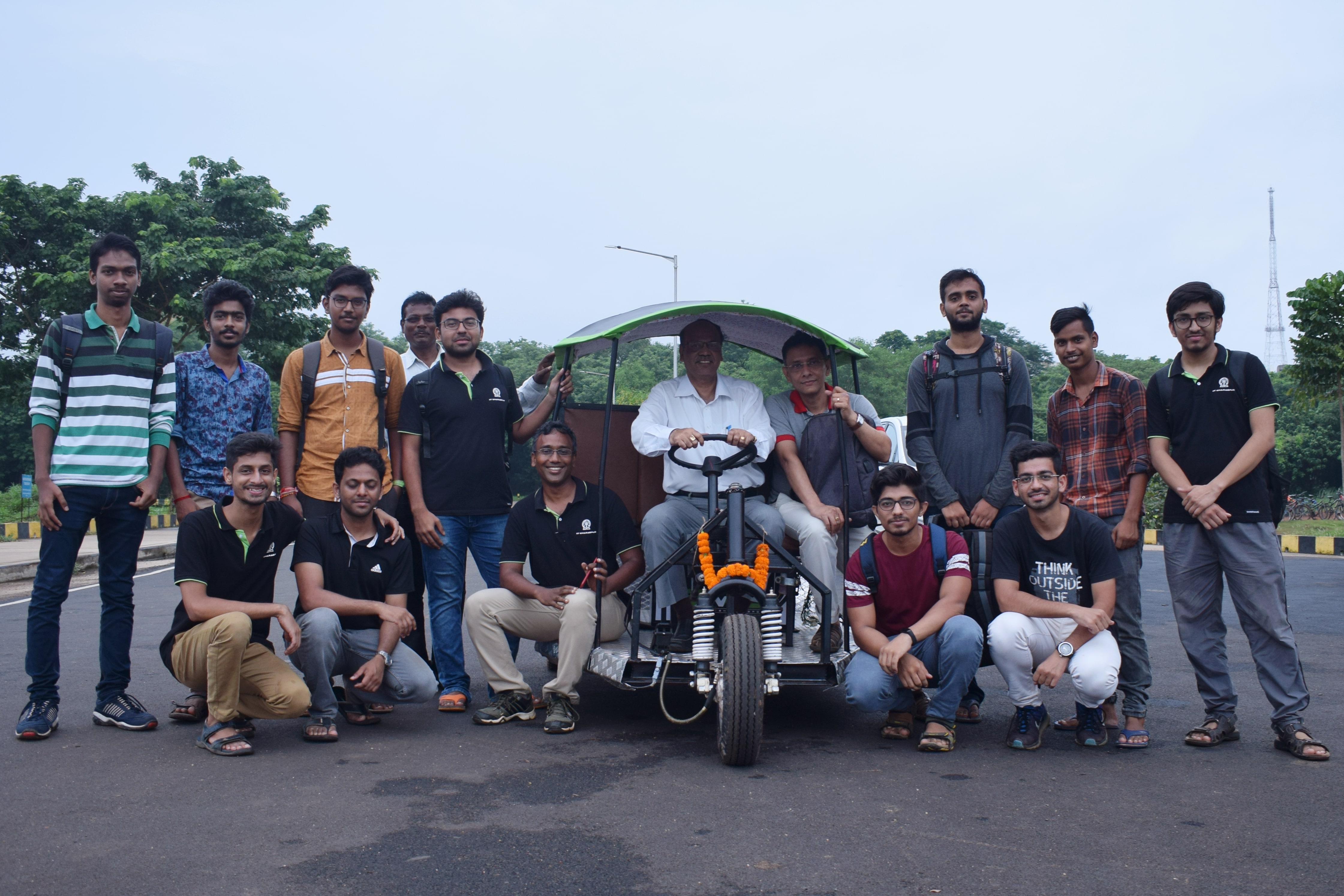 IIT Kharagpur lived up to the ‘Make in India’ challenge by launching Deshla, prototype of a fully indigenous next-gen electric auto, on September 11. The vehicle was designed and built from scratch by Electric Vehicle Group (EVG) of the Institute. Deshla, when commercialized, is bound to give the makers of both Totos (e-rickshaws) and autos a run for their money for the rare combination it has been able to produce.

With its powerful motor, lithium ion battery that can last up to 6-7 years, high load carrying capacity, sturdy frame and yet easy manoeuvrability, Deshla is a better option than diesel-guzzling, polluting autos and even the flimsy and high-maintenance Totos. It is not only clean and green, but it also steals a march on both when it comes to the issues of safety, reliability, performance, and comfort.

Why is Deshla a better option in every way? Here’s how.

Battery: It uses lithium-iron-phosphate batteries that last for 6-7 years. Totos have lead acid batteries that have a life cycle of 9-10 months at the most and need to be replaced at a cost of Rs 20,000-25,000 every time. Deshla’s batteries are more expensive but given their long life, it gains in the cost-benefit analysis. Besides, they provide uniform power delivery  unlike lead-acid batteries. As a result, the pick-up and performance of Totos get consistently sluggish, while Deshla gives uniform performance.

Motor: Totos’ lead acid batteries provide less amperage and they can serve only up to 1 kW motor. Deshla’s battery can provide a higher amperage and easily powers the 3.5 kW motor, which in turn provides more torque and therefore higher speed. Deshla can travel at a peak speed of 50 km/hr.

Suspension: Deshla’s back wheels have independent suspension, as in cars and unlike in Totos, which have rigid axles, as in trucks. This means that the Deshla is far more stable and jerk free on bad roads.

Steering wheel: Unlike the handle bar in Totos and autos, Deshla has a steering wheel that works on gear mechanism with high mechanical advantage. This was a conscious decision of the team to make it impossible for the vehicle to make very sharp turns which autos are infamous for. The gear mechanism allows for only one way motion. So bad roads will not automatically turn the steering wheel of Deshla as they do to the handle bars of Totos and autos.

Brake: Hydraulic braking instead of mechanical braking is used for more effective braking.

Easily serviceable: Unlike the Totos, which have their mechanical and electrical components shipped from China and assembled here, Deshla is completely indigenous. The EVG team of IIT Kharagpur has created the embedded and power electronics subsystems like BMS (battery management system), Motor Controller, Battery Charger, GPS and 3G Cellular connectivity modules in-house. This means the Deshla will be more reliable, easy to service/repair, and customizable.

As Prof. Vikranth Racherla, Professor of Mechanical Engineering and PI of the project, put it, “Instead of retro-fitting an existing vehicle, we thought we would build one up from scratch, especially because the design is so important for an electric vehicle. It was also important for the students to learn to do things from scratch… Each design has been conceived, analysed, prototyped and the cycle repeated many times before the actual product came out.”

The project is the brain-child of Life Fellow of the Institute, Shri Bijoy Chatterjee, and funded by another distinguished alumnus, Dr. Purnendu Chatterjee. So far, funds to the tune of around Rs 46 lakhs have been provided for the project.

Around 50 students from various backgrounds have been associated with this project since its inception three years back. Two students who graduated in 2018 have even stayed back on campus to steer the project together with Prof. Racherla. Shyama Agrawal, who worked on the motor controller and worked on the mechanical side along with Prof. Racherla said, “The fact that the vehicle is now on the road is an exhilarating experience. I am so glad that we pulled it off in the end.” The project has also attracted interns from various engineering schools across the country.

Prof. Sriman Kumar Bhattacharyya, Director, IIT Kharagpur, who both rode and drove the Deshla, said, “The ride was beautiful, jerk free and the drive was smooth. I thank and congratulate the whole team and hope that the Deshla team will go on improving the product.” He also pushed for the commercialization of Deshla.

Prof. Partha Pratim Chakrabarti, former Director, IIT Kharagpur mentioned in his social media post that the ride was excellent. He also said, “… going from here to a start-up is the way to go…. we must develop technology which is very good and spawn as many start-ups as possible.”

Prof. Suman Chakraborty, Dean SRIC, who also drove the Deshla, said, “Let us have many of these vehicles on the campus so that they enhance both campus life and livelihood.” Equally impressed with the achievements of the team was Prof. Baidurya Bhattacharya, Dean, International Relations, who said, “This is truly ‘Make in India’ and a remarkable achievement of the EVG team.”

Among the bunch of Deshla’s admirers are a growing number of Toto drivers on campus. One of them who has already tried out riding Deshla concluded, “I would be the first one to buy a Deshla when it hits the market.” Two others who hung around on the day of the launch, longingly looking at the Deshla, said, “It would be great if IIT Kharagpur could arrange for us to get loans from the bank to buy a Deshla.”

Prof. Racherla, Shyama Agrawal, and Manuj Agrawal (leaders of team EVG) have already floated a start-up for commercialization of the vehicle. Manuj Agrawal said, “We are now looking for angel funding so that we can take it forward. We have the concept model ready and now we need funds to make a production worthy prototype that can be certified.”

The Summit it is! 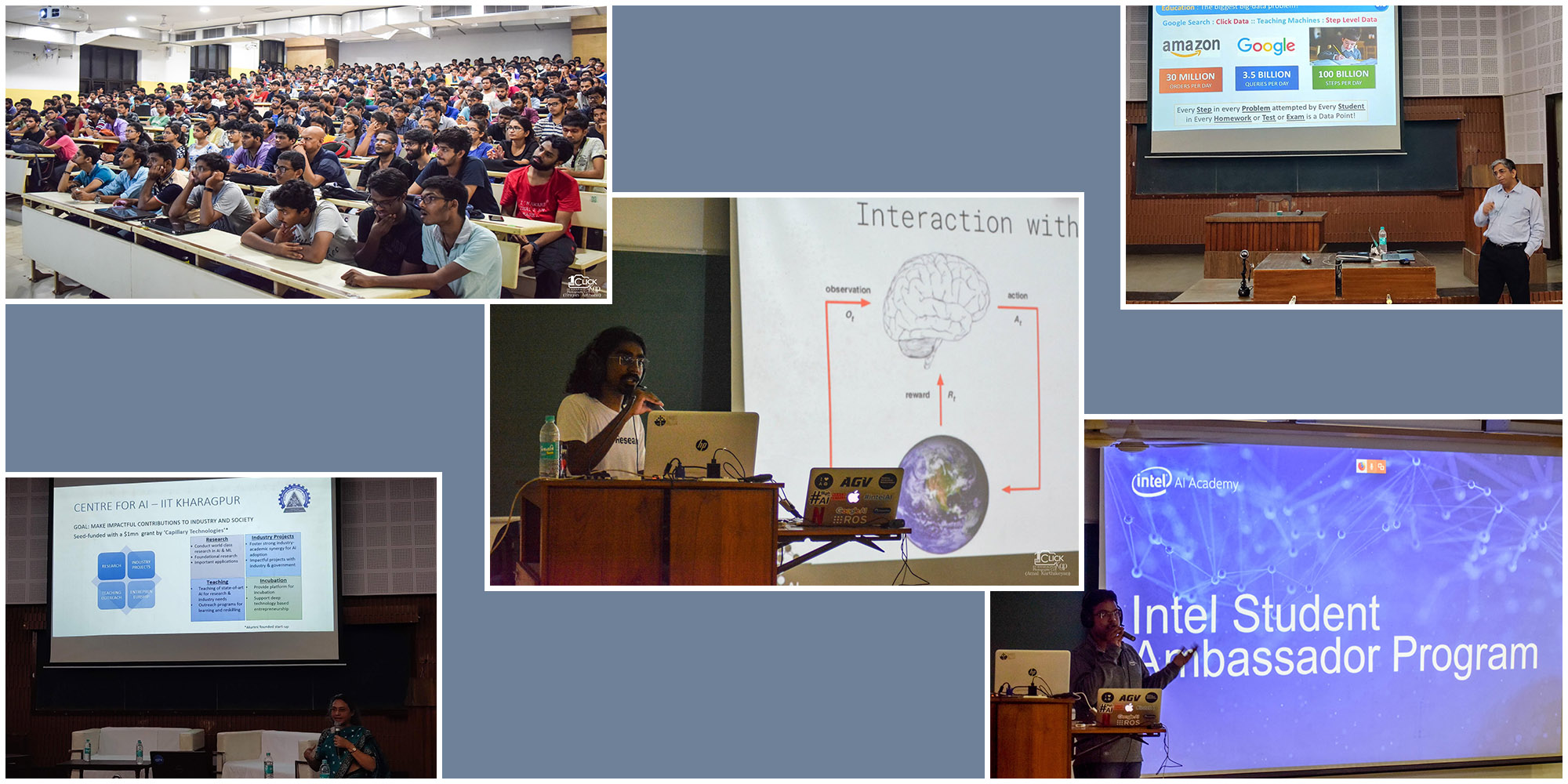 8 thoughts on “Deshla hits the road”