How safe is your tea in a paper cup?

With the current crusade against single-use plastic, disposable paper cups are on the rise especially for consuming water and hot beverages. But even these cups are not without peril. Recent research by IIT Kharagpur has confirmed contamination of the hot liquid served in paper cups due to the degradation of microplastics and other hazardous components from the lining material of the cup. 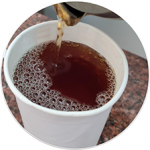 Paper cups are usually lined by a thin layer of hydrophobic film which is made of mostly plastic (polyethylene) and sometimes co-polymers to hold the liquid in the paper cup. Within 15 minutes this microplastic layer degrades as a reaction to hot water, says the first of its kind study conducted in India by Dr. Sudha Goel, Associate Professor at the Dept. of Civil Engineering and research scholars Ved Prakash Ranjan and Anuja Joseph studying Environmental Engineering and Management.

The paper ‘Microplastics and other harmful substances released from disposable paper cups into hot water’ has been published in the Journal of Hazardous Materials recently. [https://doi.org/10.1016/j.jhazmat.2020.124118].

“According to our study, 25,000 micron-sized (10 µm to 1000 µm) microplastic particles are released into 100 mL of hot liquid (85 – 90 oC) residing in the paper cups for 15 mins. Thus, an average person drinking 3 regular cups of tea or coffee daily, in a paper cup, would be ingesting 75,000 tiny microplastic particles which are invisible to the human eyes,” says Prof. Sudha Goel. 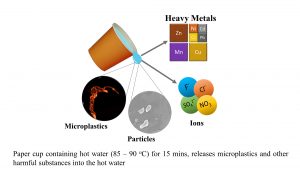 The researchers followed two different procedures – in the first process, hot ultrapure (MilliQ) water (85–90 ◦C; pH~6.9) was poured into the disposable paper cups,  and it was allowed to sit for 15 mins. The homogeneously mixed water was then analyzed for the presence of microplastics as well as additional ions that may have leached into the liquid from the paper cups. In the second process, paper cups were initially dipped in lukewarm (30–40 °C) MilliQ water (pH~6.9). Thereafter the hydrophobic film was carefully separated from the paper layer and exposed to hot MilliQ water (85–90 °C; pH~6.9) for 15 mins. and Changes in the physical, chemical, and mechanical properties of the plastic films were examined before and after exposure to hot water. 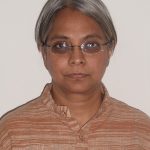 Explaining the exposure of 15 minutes, Prof. Goel linked its basis to a survey wherein the respondents confirmed consuming their beverage within 15 mins of obtaining it.

“Besides the result of the survey, it was also observed that within this time, the beverage attained the ambient temperature,” she said. 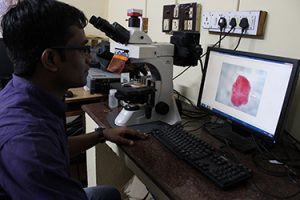 The samples of paper cups were collected from popular stores across Kharagpur, West Bengal. “Our study indicates most plastic layers lining the paper cups were of HDPE (High-density polyethylene) grade, whereas only very few paper cups were lined with a copolymer of cellulose. However, the release of microplastics into the hot water was consistent in all samples irrespective of their grades,” remarked researcher Ved Prakash Ranjan.

Apart from the presence of ions, the study also revealed that the plastic layer was laden with toxic heavy metals like Palladium, Chromium, and Cadmium.

“Our hypothesis on the degradation of the plastic layer after exposure to hot water was confirmed through images obtained from the atomic force and scanning electron microscopy. Also, another study on the mechanical properties of the plastic film proved its deformation upon exposure to heat,” explained researcher Anuja Joseph.

What could be the effect of long-term exposure to such microplastics?

Prof. Sudha Goel expressed concern over the bioaccumulation of microplastics in human and animal bodies.

“These microplastics can further act as carriers for contaminants like ions, toxic heavy metals and organic compounds which are similarly hydrophobic in nature thus allowing them to conveniently cross over to the animal kingdom. When ingested, the health implications could be serious,” she opined.

While the research to study the health impact of microplastics is relatively limited, researchers are assertive about adverse effects from both the environmental and health point of view. Such materials have been repeatedly linked with child growth and organ development, reproduction issues, disruption of hormones, obesity etc. At a spring conference at the Rutgers Center for Urban Environmental Sustainability, a research group presented the possibility of passing microplastics from the mother’s body to even the fetus.

“These contaminants can bioaccumulate in organisms leading to health issues like the disruption of the endocrine system, reproductive defects, cancer, neurological disorders and other effects. There could be further health challenges such as the impact on the sense organs, immune dysfunction or even cancer. That remains for domain experts to confirm while we can foresee the environmental mayhem these particles are going to cause if gone unchecked,” stated Prof. Goel.

Several states in India have been mulling over restricting the use of paper cups but feasible alternatives are not yet on deck. Referring to the situation, Director, Prof. Virendra K Tewari called for careful consideration before the promotion of replacements for bio-hazardous products and environmental pollutants. He said,

“We have been quick to replace plastics cups and glasses with disposable paper cups. While the need was crucial we have to find eco-friendly products. India has traditionally been a country promoting sustainable lifestyle and may be it is time that we look into our roots for corrective measures.”

He wondered if earthen products can meet the consumer demand for disposable plastic and paper cups.

“Atmanirbhar Bharat has to be in our thinking before we adopt it in our lifestyle and the country’s economy and everything we do should have a reflection of that thought process and thereby in our consumption behaviour,” he added.