Researchers at IIT Kharagpur have developed devices for automating a range of functions for planting sugarcane buds, fitted with an autonomous fungicide application with the aim to reduce labour hours and raw material wastage.

Sugarcane is a global industrial crop popular for the production of sugar, bioenergy, paper, ethanol, electricity etc. The economic importance of the crop in India is paramount with the country registering 17% of global sugarcane production, second only to Brazil. But each year the farmers are losing excess cane stalk as seed material due to conventional cultivation practice which is also labour and time-intensive thus increasing the overall production cost.

The sugarcane planting system, developed by the research team at the Dept. of Agricultural and Food Engineering, consists of a machine vision-based bud cutting machine and a tractor operated bud planting machine.

The bud cutting machine involves three sub-mechanisms – a sugarcane feeding system, a machine vision system for the identification of sugarcane buds and a mechatronic system for cutting the identified bud. 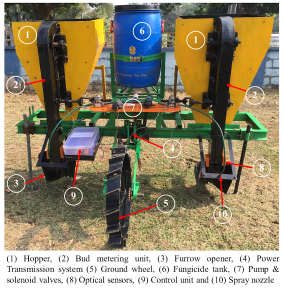 The tractor operated bud planting machine is also developed for the planting of the prepared sugarcane buds and application of fungicide. It consists of a two-row bud planting mechanism and a sensor-based autonomous fungicide application system.

The functions of the machine include opening a wide soil furrow using furrow openers, picking the buds from the seedbox with the help of a metering mechanism, placing the buds into the soil through a seed delivery tube, sensing of the placed bud and automatic application of fungicide on the bud.

The mechanism would allow reusing 80% of the internodes generated during the process for sugar production and other mainstream purposes.

“This technology holds a significant potential at industrial and local levels especially in countries like India that are among the major producers but lacks automation for input developments. This system may further assist in reducing the net planting material requirements against the conventional methods adopted for sugarcane plantation. We can save the excess amount of cane stalk, trashed in the conventional plantation thus reducing the sizable loss of raw material,” said Prof. Virendra K Tewari, Director of the Institute and Professor of farm machinery, who led this product innovation.

The throughput capacity of the developed system with a single cutting unit can range up to 1418 buds/hour.

“Through this automation technology, we can generate seeding material for a hectare of land in 10-15 hours which otherwise takes about 60-90 hours when relying on conventional (manual) methods. This could not only turn out to be a cost-saving opportunity for the farming community but a capacitive solution for sugarcane cultivation through bud chips as well,” added Prof. Tewari.

Another area that is addressed through this technology is the autonomous fungicide application which is integrated into the tractor operated planting machine. To protect the seed from soil-borne disease, a sensor-based spraying system has been designed and integrated with the planter to apply a predefined amount of fungicide over the bud and the surrounding soil.

Dr. Brajesh Nare who carried out his doctoral work at IIT Kharagpur and currently working as a scientist at ICAR-CPRI Shimla remarked, “The autonomous system was developed for spot application of liquid fungicide at the time of placement of the bud in the furrow. The function of this system is to detect the buds just before their placement in soil and spray a prescribed amount of chemical on the bud and around the soil. A significant chemical saving was found to be 48% with the sensor-based application at the selected speeds.”

The machines have been tested on a varied range of sugarcane diameters and two popular cultivars were chosen to evaluate the system performances. The research team has filed for a patent in addition to publications in international journals. The other members in the team include Abhilash Chandel, Satry Prakash, Chethan CR, Prateek Shrivastava and Chanchal Gupta.

“Such systems can be majorly employed across the major sugarcane producing countries as complementary and economic tools. Moreover, such units may be multiplied and incorporated industrially to produce sugarcane planting material as per the size of cultivation,” opined Dr. Nare.