Indian culture has been a magnet for many fresh off the boats for centuries. The country’s music, art, knowledge systems, festivals have always awed the world, drawing explorers from Europe, the Middle East and the Orient. The legacy echoed in the anecdotes of Pavel Karmanov and Juan David Matallana Guerrero on the day of their convocation on February 23, 2021. 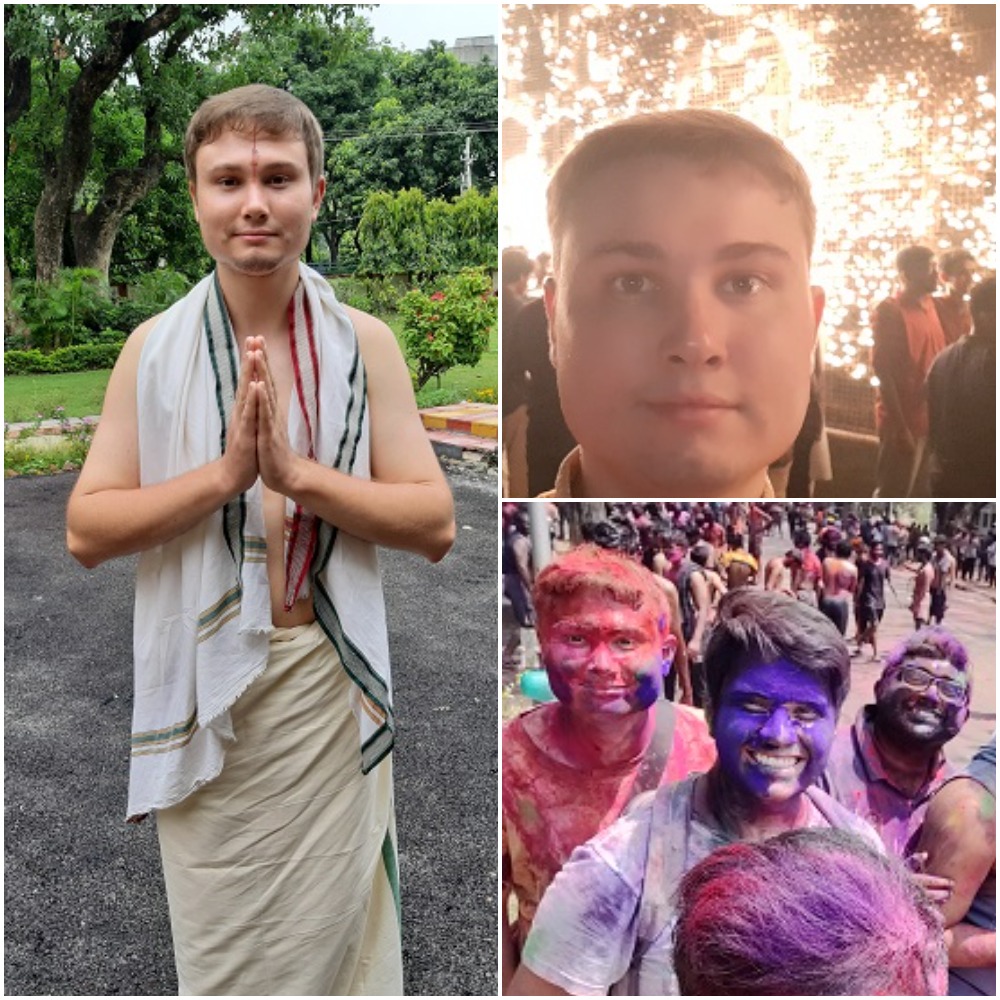 Pavel from the Winterland

While growing up in the city of Chita, located near the Trans-Siberian Railway in Russia, the five-year-old Pavel used to listen to an unfamiliar but exotic tune on the radio. Soon he learned the name of the musical instrument and its performer – it was the Sitar of Pandit Ravi Shankar. Many may have heard the maestro of Hindustani classical music but to only a few it would have been a guiding light to the land of its origin. Pavel was one such admirer. A few years later Bollywood added to his admiration for the country. Even to this day, he remembers the joy of watching the popular 70s movie Seeta Aur Geeta. Added to these was the medieval period account on India by Russian explorer Afanasy Nikitin. For the next few years, the idea of India only gained momentum in Pavel’s thoughts which transformed his career aspirations. A student of Geophysics who completed undergraduate and postgraduate degrees in this discipline, Pavel found his destination to fulfill his career goals along with answering his call for India; Indian Institute of Technology Kharagpur, for him, was the conflux. 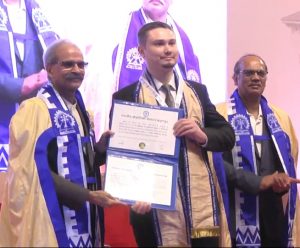 In 2018 Pavel Karmanov joined the M.Tech. program at the Dept. of Geology and Geophysics at IIT Kharagpur. He was awarded the Institute Silver Medal at 66th Convocation for being the topper in his discipline. If not a first but this is a rare achievement for foreign students in India in recent times. Pavel continues his higher education at IIT Kharagpur as a doctoral student in the department with a specialization in Hydrocarbon Exploration. [Learn more about the program]

For Pavel, the charm of India and her people is such that neither the hot summers nor the hot Indian curry could deter him from the Indian way of living and living among his friends. 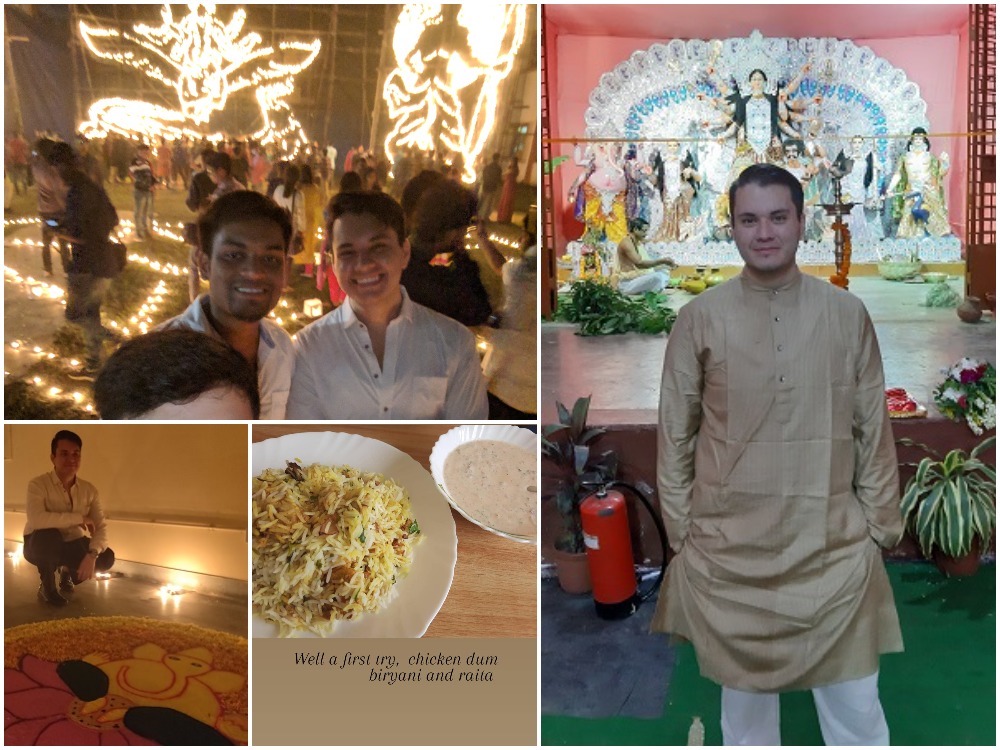 Indian festivals have always drawn the attention of global tourists. For the young Juan in the city of Bogota in Colombia, Holi (festival of colors) and Diwali (festival of lights) celebrated by the Indian Embassy were captivating. Added with it were the food and festivities. Juan David Matallana Guerrero knew his terminal journey had only one name – India.

Aspiring to study Metallurgy, Juan’s compass located a familiar name and his alma mater. Sundar Pichai, the CEO of Google and Arun Sarin, former CEO of Vodafone had both started their journey at the Dept. of Metallurgy and Materials Engineering at IIT Kharagpur. He followed the career path of several other renowned personalities hailing from IIT Kharagpur in the field of metallurgy and materials as well as the global academic reputation of the department. 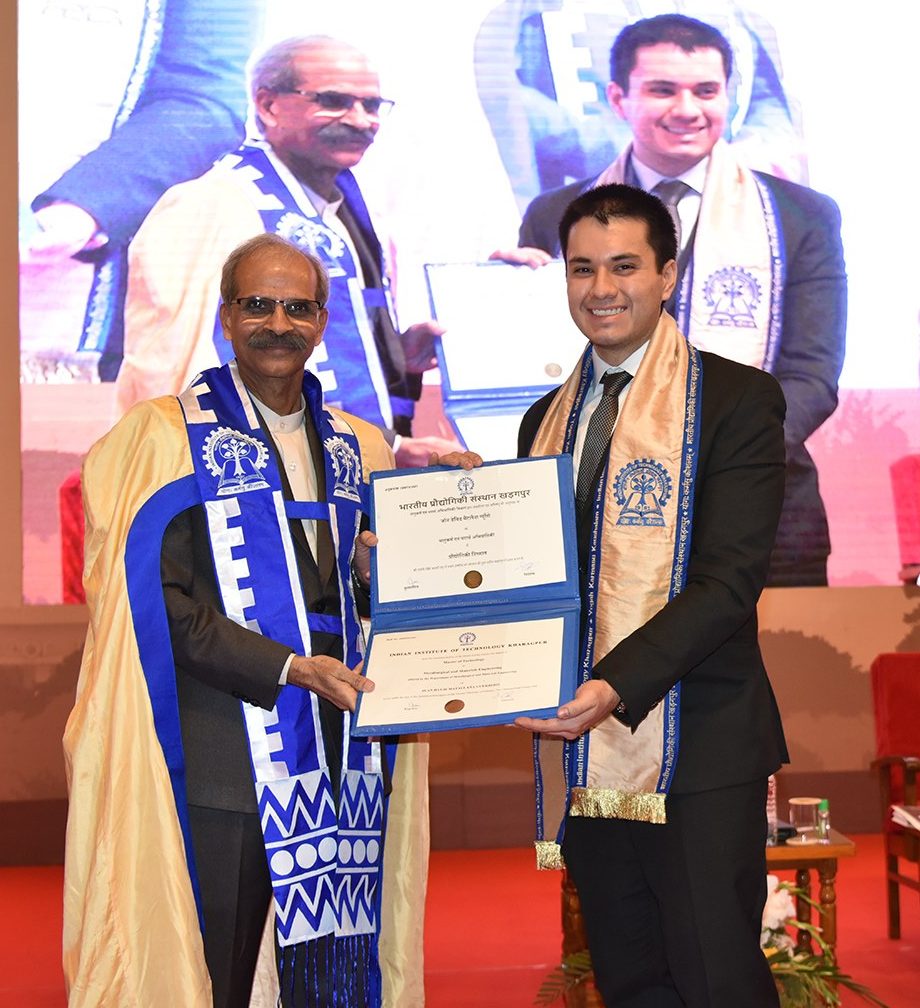 In 2018 Juan took admission in the M.Tech. program at the Institute. Following his graduation, he joined the Ph.D. program in the department to study the field of surface engineering. [Know more about the program]

Pavel and Juan were among the four foreign students (excluding PIO and OCI card holders) who got their degrees at the 66th Convocation of IIT Kharagpur. While Ruairidh Mitchell from Australia received his doctoral degree in Geology & Geophysics under a dual doctoral program with Curtin University, Karma Tenzin from Bhutan completed M.Sc. Physics.

In Karma’s words, “The degree means a lot to me. I am already making an impact here in  Bhutan. Also getting lots of professional development opportunities after earning a degree from IIT Kharagpur.” Thanking the international office and professors he hopes for similar support in the future.

The International Office which was formally set-up in 2015, witnessed a significant transformation by 2017-18. From the inception in 2015 with only exchange students, the Institute today has eighteen students in 2021 pursuing their degree programs. In addition, the institute has had a steady stream of short-term students coming from different parts of the world for research internships or under semester abroad programs. In addition to government-sponsored schemes like ICCR, DST, ASEAN, etc. the Institute has also established its own in-house programs to support international visiting scholars and degree students viz. Shri Gopal Rajgarhia International Program (SGRIP), Asoke Dey Sarkar International Programme (ADSIP) and the Guru Kripa Foundation International Scheme (GKFIS) funded by alumni Shri Gopal Rajgahria, Asoke Dey Sarkar and Mukund Padmanabhan respectively. The Institute has a dedicated International Relations Office to cater to the needs of the foreign students as well as a student body named International Relations (IR) Cell to help the incoming students to settle down and seamlessly integrate with the new place and culture.

Talking about the way forward, Associate Dean Prof. Anandaroop Bhattacharya said, “When I took up this role in 2018, my “boss”, the Dean (IR)  Prof. Baidurya Bhattacharya spoke about the vision to make our institute the destination of choice for foreign students in India. Over the last 3 years, we have taken significant strides.  The pandemic has made our path bumpy but I am confident it is not for long. While Pavel and Juan’s are remarkable testimonials of the impact of Indian culture on foreign students, we are moving forward with more strategic plans to augment our international outreach programs, be it through govt initiatives such as ICCR, or ASEAN Fellowships or DST schemes among others or our programs and funding opportunities available at IIT Kharagpur. We have set our goal for having more than 100 full-time degree students from foreign countries by 2025.”