In the wake of the ongoing initiatives to control pollution, we are often made to think of the proverb ‘prevention is better than cure’. There is an urgency to replace the use of fossil fuels like petrol and diesel which are direct causes of pollution, global warming and climate change. Various clean energy technologies have been developed. Acres of land in the country have been allocated for solar and wind energy, hydel power and geothermal projects have been deployed and expanded over the decades. But India’s fossil fuel import bill still runs high due to non-availability of renewable energy sources at mass scale. Biofuels derived from high-energy non-edible plant sources such as Sunn Hemp on the other hand have the potential of making it available in large scale for replacement of fossil fuel which can find significant use in transportation sector. The main obstacle to its large scale deployment as a future fuel is its highly crystalline structure and long polymer chains, which make the fibres inaccessible to enzymatic and chemical treatments.

Researchers from IIT Kharagpur’s P K Sinha Center for Bioenergy have exacted the issue through the use of microwave radiation. The team from the Bioenergy Lab at the Dept. of Chemical Engineering has successfully converted non-edible lignocellulosic fibres of Sunn Hemp to biofuel precursors, and that too completing the entire conversion – which otherwise takes about 8-10 hours – in only 46 minutes using the microwave reactors in the lab.

“1 kilogram of Sunn hemp fibres containing 756 gram of cellulose produces 595 gram of glucose at 160°C, and 203 gram of hydroxymethylfurfural (HMF) at 180°C, in 46 minutes. The glucose is separated and fermented using yeasts to produce 230 g of ethanol-based biofuel which is often used in automobiles as a biofuel additive for gasoline. The platform chemical HMF can also be hydrogenated to furanic biofuels such as dimethylfuran which can be used as a replacement for diesel” explained researcher Souvik Kumar Paul.

The large scale availability of Sunn Hemp in India along with its fast rate of growth and high cellulose (75.6%) and high energy contents (2.5×109 MJ/year) are the key elements of listing it as a top choice for the biofuel industry. Sunn hemp fibres produce 2268 kg dry biomass/acre in only 9–12 weeks, with 19 megajoule of energy/kg dry biomass at a global production of 130,000 MT/year.

“Sunn hemp fibre has the unique potential of being converted to transportation biofuels rather than being merely used as bast fibre for weaving mats, etc. Our research will give its chemical composition the necessary stability for conversion and deployment as liquid biofuels, which can be used by the transportation industry in a large scale,” said Prof. Saikat Chakraborty, lead researcher and faculty at the Dept. of Chemical Engineering and P K Sinha Center for Bioenergy.

These chemical reactions are performed by the scientists at IIT Kharagpur in a large microwave digestion system that houses 16 high pressure reactors. By combining the dried Sunn hemp fibres with chemicals such as ionic liquid and metal catalysts, and water at high temperatures, they form large molecular structures in these microwave reactors. This supramolecular complex being polar in nature rotates under the microwave’s alternating polarity and rapidly dissipates the electromagnetic energy through molecular collisions across the reactors. These dipole rotations and intermolecular collisions help rapidly break the polymeric bonds in the Sunn hemp fibres and convert them to biofuel precursors in only 46 minutes.

“Biofuel production costs are minimized by recovering and recycling the ionic liquid,” added Chakraborty. “This conversion process, which can be used for a large spectrum of non-food lignocelluloses apart from Sunn hemp, is particularly suitable for commercialization because it results in a 10-fold decrease in the reaction time. A mixture of biomass can also be processed in these reactors rather than a single biomass without any further increase in the reaction time, which should make this process an attractive option for the biofuel industry.”

While the significant industry potential of this invention has led the scientists to file for a patent, their findings have also appeared in the globally renowned journal Bioresource Technology published by Elsevier.

The future of medicine 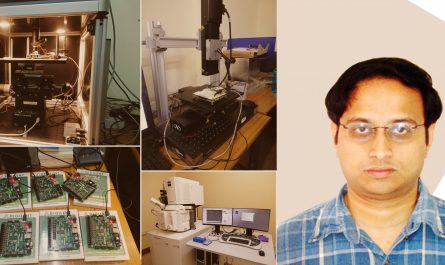