‘Herd immunity’, a much discussed issue now the world over, and ‘R-naught’ (R0) – both the terms came up during a discussion on public health by Prof. Sangeeta Bhattacharya of the School of Medical Science and Technology, IIT Kharagpur. Prof. Bhattacharya, a double board certified physician in the US and Associate Faculty at Johns Hopkins School of Public Health, Baltimore, was talking on the importance of the coverage of public health during the recent Science Communication Conclave organized at IIT Kharagpur (Feb 28-29). The conclave sought to facilitate better communication between the scientific community and journalists. 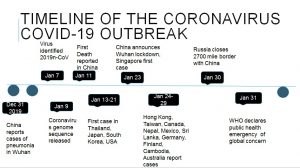 During her talk at the Science Communication Conclave, Prof. Bhattacharya talked about the threat to public health from nCovid-19 and drew attention to the ‘herd immunity’ and ‘R-naught’ numbers for nCovid-19. Herd immunity is the number that describes how many people in a population need to be immune to that particular pathogen to prevent transmission. R-naught is the basic reproductive number of the pathogen and describes how contagious it can be.

The R-naught for measles, for example, is 18. For varicella zoster, or the virus that causes chicken pox, it is 16 and for mumps, it is 12. Compared to these, the R-naught number for nCovid-19, as understood now, is 2.7,. 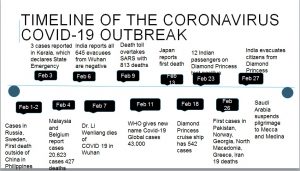 Yet, the threat from nCovid-19 was far more than any of these. “ ‘How do you deal with a novel pathogen when there is no immunity in your population?’ That is the question that we are grappling with now,” said Prof. Bhattacharya while talking to KGP Chronicle recently.

The concept of herd immunity, said Prof. Bhattacharya, is used really in association with vaccines, specifically for vaccines for infections that one can catch from other people. “Vaccines are agents that are used to improve the herd immunity to a pathogen so that you stop spread. The number of people that need to be immune depends on the contagiousness of the pathogen or its R-naught value. For measles, which is highly contagious, 95% of the people need to be immune to prevent transmission. That is a near perfect immunization rate. Unfortunately, in our young adult population in colleges we do not see that number, so there is continued transmission of measles even though there is an excellent vaccine. We need strategies to implement these vaccines,” she pointed out. 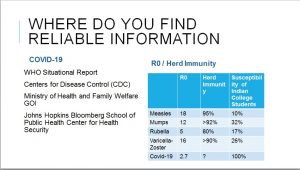 She added, “Of course, you cannot have herd immunity for something like Tetanus which you catch from the environment and not from other people.”

The Oxford Vaccine Group of the University of Oxford writes in its website on ‘Vaccine Knowledge Project: Authoritative Information for All’ that “When a high percentage of the population is vaccinated, it is difficult for infectious diseases to spread, because there are not many people who can be infected. For example, if someone with measles is surrounded by people who are vaccinated against measles, the disease cannot easily be passed on to anyone, and it will quickly disappear again. This is called ‘herd immunity’, ‘community immunity’ or ‘herd protection’, and it gives protection to vulnerable people such as newborn babies, elderly people and those who are too sick to be vaccinated.” 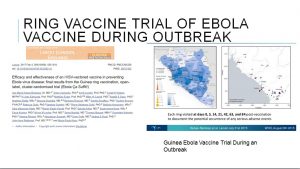 This could happen in the case of Ebola, the other test case discussed by Prof. Bhattacharya at the Science Communication Conclave. The discovery, and the eventual use of rVSV-vectored vaccine, is likely to reduce the threat from this deadly virus in large parts of Africa. The vaccine was tried during Ebola outbreak in Guinea and it was found through the ring vaccine trial – where contacts, and contacts of contacts of the infected were vaccinated – that vaccination, even for those infected, reduced chances of death.

Such a thing is not yet possible to combat nCovid-19, which does not have a vaccine yet. So susceptibility of the human population to the disease was 100 per cent, said Prof. Bhattacharya. 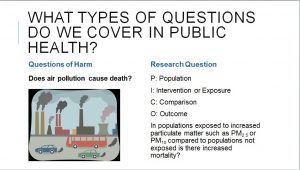 “Covering public health as a journalist is enormously exciting, and probably very frightening as well because you have to get the information right as it impacts so many people,” said Prof. Bhattacharya to journalists at the Science Communication Conclave. For reliable information on the rapidly evolving scenario concerning nCovid-19, Prof. Bhattacharya referred WHO Situational Report, Centers for Disease Control and Prevention (CDC), the Government of India’s Ministry of Health and Family Welfare and Johns Hopkins Bloomberg School of Public Health Center for Health Security.

For journalists covering public health, she advised, “If you are trying to understand what a particular research paper in public health is all about, then frame it the way researchers ask questions, which is PICO – the abbreviation for ‘Population’, ‘Intervention or Exposure’, ‘Comparison’ and ‘Outcome’.” 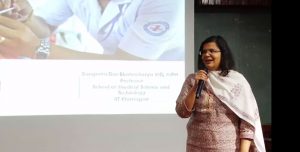 For example, while gauging the severity of air pollution, a journalist could ask if ‘In populations exposed to increased particulate matter such as PM2.5 or PM10 compared to populations not exposed, is there increased mortality?’

While defining the concept of ‘public health’, Prof. Bhattacharya cited the 1920s definition by Charles Edward Amory Winslow, Founder of the Department of Public Health at Yale, “The science and arts of preventing disease, prolonging life, and promoting health through organized efforts and informed choices of society, and organization, public and private communities, and individuals.”

To unitedly combat the threat from nCovid-19, we perhaps need to reiterate the importance of Dr Winslow’s emphasis on “organized efforts and informed choices of society, and organization, public and private communities, and individuals.”