Swami Vivekananda said, “Because the very sound of  Sanskrit words gives a prestige and a power and a strength to the race.”

Centre of Excellence for Indian Knowledge Systems (CoE-IKS) of IIT Kharagpur celebrated Sanskrit Week from 9th August to 15th August 2022 with an array of programs. The CoE-IKS took this initiative to create an awareness about the vast knowledge tradition that the language of Sanskrit beholds for the Modern India. On the first day Prof. V. R. Desai, Dean of Faculty of Engineering and Architecture, inaugurated the series of programs  and spoke about the relevance of Sanskrit in present times, its importance in developing ourselves socioeconomically, scientifically, and technologically in every field while preserving the great heritage. Prof. Khanindra Pathak, Dean of Infrastructure, graced the occasion and suggested some future steps in order to know the tradition of Vaada and Samvada, a method of finding the truth through dialogues. Shri Rajeev Rawat, Senior Officer, Rajabhasha Vibhag also emphasized identifying the root cause of problems and taking firm steps to solve them. Mr. Krishna Kumar, a Research Scholar of IKS brought divinity to the program by reciting stotras. Kumari Pranamya Bhat and Kumari Hridya added a mystical charm to the occasion by singing Sanskrit songs.

The second day saw a programme which was organized in the Brahmagupta Hall (V3) in Vikramashila building of IITKGP. More than 80 students  participated in this awareness program where Dr. Dipesh Katira, Assistant Professor of the Centre of IKS, explained the purpose and importance of the Sanskrit week.  As we know, Krishna Tirtha is credited with the discovery of 16 mathematical formulae that were part of the Parishishta which is an appendix of the Atharva Veda. Tirtha’s simple formulae make intricate mathematical calculations possible. Dr. Mahesh K, Assistant Professor of the Centre of IKS, gave a glimpse of Mathematical study in Sanskrit.

Prof. Joy Sen, the Chairperson of IKS addressed the students on the topic of Sanskrit and Indian Culture on the third day. He laid a special emphasis on civilizational ethos which is the democratic spirit, including respect for rule of law and pluralistic ethos that is ingrained in Indians and also carried by the Indian diaspora who contribute to the economic well-being and social harmony of their country. More than 400 students were in the awe of exploring a different level of dimension through the lenses of this forgotten language, held in Aryabhata Hall (V1), Vikramashila building. The programm communed with an introduction by Dr. Mahesh on the importance of Sanskrit as a vehicle of Sanatana Culture. 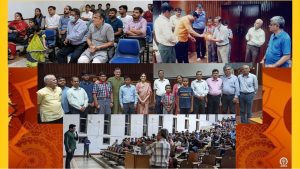 On the fourth day, two programs were held. In the morning session which was held in Brahmagupta Hall (V1),  Dr. Dipesh introduced digital tools for learning Sanskrit to the students. Dr. Jayashri was the convener of the program. The students enthusiastically participated in the discussion. In the evening, Prof. Shankh Pratim Bhattacharya, Associate Professor in Dept. of Architecture and Regional Planning spoke about Sanskrit and Nirman Vidya, where he explained how Indian architects were capable of dealing with intricacies in the building with various artistic structures. Students from Kendriya Vidyalaya, Shreyas and Arunabha Manna and others from the KGP fraternity participated and presented Gita Shlokas. Shri S C Das and Shri Haripad, Sanskrit Teachers from Kendriya Vidyalaya graced the programme with their presence.  Sri S C Das spoke about the eternal values that can be imbibed by learning Sanskrit.  Krishna Kumar, Research Scholar, CoEIKS was the host for the program.

On the fifth day, Dr. Jayashri spoke about the comprehension theories of language, as discussed by Indian grammarians. Prof. V. R. Desai spoke about ‘Vrksha Nakshatra’ which was held in Prof. S N Bose Auditorium of the institute.

Prof. Somesh Kumar, Department of Mathematics spoke on Samskrita and Ganita on the sixth day. He presented the contributions of Indian mathematicians such as Aryabhata, the first great astronomers of the classical age of India who discovered the astronomical and mathematical theories written in 499 AD and Bhaskaracarya, the leading mathematician of the 12th century, who wrote the first work with full and systematic use of the decimal number system etc., which mesmerized the audience. Mr. Shreyas from Kendriya Vidyalaya presented a Subhashita on the importance of Vidya and explained its meaning. Dr. Richa Chopra, Assistant Professor, CoEIKS spoke about the role of Sanskrit in keeping good mental health and boosting morale. The program commenced in the presence of  Prof. V. R. Desai and Prof. B N Singh, Professor, Aeronautical Engineering.

The seventh and the concluding day of the Sanskrit Week was celebrated with a wonderful cultural evening with Sanskrit and Music which was held in Prof. S. N. Bose auditorium in the presence of the IIT KGP fraternity comprising of authorities, professors, students of the institute, school children and campus residents. Prof. V. R. Desai presented the Nirvana Shatkam of Adi Shankaracharya with its holistic approach in the modern contemporary while the participants discussed about the future course of action in preserving the language and culture. Students of Kendriya Vidyalaya Sreyas, Gauri Shukla, Rudra, Arunabha Manna and Pranamya Bhat captivated the audience by exhibiting their talents in Sanskrit. Prof. Joy Sen created a divine atmosphere by presenting beautiful Bhajans. The closing ceremony was overwhelmed by the presence of Prof. B N Singh, Prof. Somesh Kumar, Dr.Rajeev Rawat, Shri S C Das and Shri Haripad. 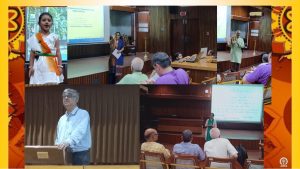 On the closing ceremony of the Sanskrit Week, Prof Joy Sen, Chairman, CoE-IKS remarked ,”Sanskrit, the most ‘perfected’ of language system, the Mother of all languages in the world, and a network of language syntax at the highest apex of the Indo-European language systems, awaits full revival and complete repositioning for complete recovery of Indian Knowledge Systems as it is certified as the most advanced language code with over 48 vowels-consonants, 8 cases and being most perfected in Natural Language Processing (NLP) system of computational sciences.”