It was in 1920 that Hermann Staudinger, the legendary German organic chemist, proposed the concept of ‘macromolecules’. Since then macromolecules have revolutionized the materials sciences and biosciences and supported the rapid growth of the plastics industry. It is not without surprise that the Rubber Technology Centre of IIT Kharagpur, which has spearheaded research in rubber and polymers since its inception in the 1980s, should think it fit to celebrate the beginning of the second century of the macromolecule with the holding of the International Conference on ‘Green and Sustainability in Polymers and Functional Materials: Opportunity and Challenges’, particularly at a time when the environmental alarm bells have been ringing loud. 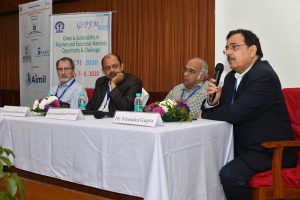 The conference, held under the aegis of MHRD’s SPARC scheme and in collaboration with the University of Melbourne, saw three plenary lectures and 14 invited lectures by distinguished scientists, faculty members and technologists from the academia and industry, who talked about the recent advances in green polymerization techniques, the development of new and sustainable functional materials and the use of these in diverse applications that ranged from the automobile industry to drug delivery.

Of particular interest was the plenary lecture of Dr Muthupandian Ashokkumar of the School of Chemistry, University of Melbourne, who talked about the use of ultrasound in polymerization. It is known that the interaction of sound waves and gas bubbles in liquids lead to acoustic cavitation, and that the force of this interaction has been used to prepare food emulsions and extraction of useful compounds from plants and other materials. Dr Ashokkumar’s team is using the technique to ultrasonically encapsulate, in the core of chitosan-shelled microspheres, a non-polar liquid nutrient. The method could not only be used to deliver nutrients, such as milk, fruit juice etc., but it could also be used for the encapsulation and targeted delivery of drugs. 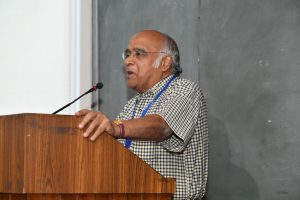 In his inspiring plenary lecture, Dr S. Sivaram from IISER, Pune took the audience through the fractious yet scintillating history of the discovery of the ‘Macromolecule’ and showed how polymer science is indebted not merely to Staudinger, but to a host of other scientists, starting from Michael Faraday in 1826 – who first noticed ethylene and butene differed in their gas density, but had the same elemental composition, and opened up immense possibilities – to Wallace Carothers – who gave polymers its most acceptable definition – to Herman Mark in the late 20th century, who led the way for the X-ray crystallography of Macromolecules to show that a molecule could be larger than its unit cell. 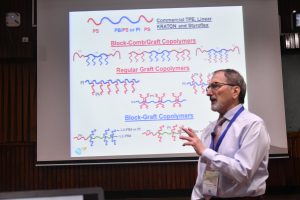 Dr Sivaram also talked about the future possibilities of aliphatic polyesters such as polylactic acid (PLLA) and its competitive advantage over PET as a biodegradable, sustainable option. “There is still scope for new monomers and improved chemistry to tailor the structure and properties of aliphatic polyesters as a platform for sustainable materials.” Prof. Vimal Katiyar from IIT Guwahati too talked about PLLA and explained how bionanofillers could vastly improve the properties of PLLA.

If Dr Sivaram made a case to return to monomers from polymers, in other words, take a relook at monomers, Dr Nikos Hadjichristidis from King Abdullah University of Science and Technology, Saudi Arabia, strengthened the case by talking about developing new thermoplastic elastomers from old monomers. 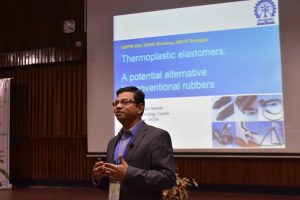 New techniques for the development of new functional materials were elaborated severally by the speakers. Among them were Dr Sayam Sen Gupta from IISER Kolkata, who talked about fabricating porous materials through self-assembly of inorganic nanoparticles and silk proteins, Prof. Kinsuk Naskar of IIT Kharagpur, who gave an overview of the generation of thermoplastic elastomers and thermoplastic vulcanizates, and Dr Nabendu B. Pramanik from the Department of Chemistry, Lehigh University, USA, who talked about the development of hyperthin polymeric membranes for the separation of carbondioxide from flue gas as a way to fight global warming. Dr Hirendra N. Ghosh from the Institute of Nano Science and Technology, Mohali, elucidated on a new technique regarding metal-semiconductor interface that could majorly impact the production of solar cell and optoelectronic devices. 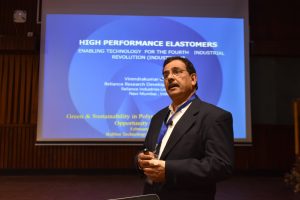 Both the industry representatives – Dr Virendra Kumar Gupta from Reliance Industries, and Dr Sujit S. Nair from Ceat talked about their initiatives in developing high performance elastomers with self-healing properties or functionalized polymers for new generation green tires that will make up 90% of the need of the automobile industry in the near future. Both of them talked about their company’s collaboration with IIT Kharagpur in the development of these polymers. “We have collaborative projects with different industries like major petrochemical industries in India and abroad, different tire industries, different rubber and polymer manufacturing industries in India and abroad, coating, paint industries etc.” reminded Prof Santanu Chattopadhyay, Head of the Rubber Technology Centre. 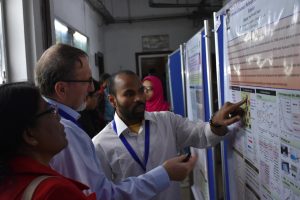 A major emphasis of the conference was on the use of various polymers for drug delivery. Dr Suhrit Ghosh from the Indian Association for the Cultivation of Science talked about the use of biodegradable polydisulfide in efficient drug delivery and drug release. Dr Braja Gopal Bag of Vidyasagar University, Midnapore, talked about the use of hybrid material –terpenoids – extracted from plants which showed great promise in drug delivery. Prof. Santanu Dhara of IIT Kharagpur talked about the various advances made by the Biomaterials and Tissue Engineering group of the Institute in the development of customized biodegradable implants and the use of biological wastes for development of biopolymers and materials for healthcare delivery. 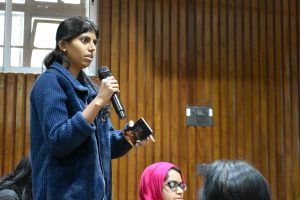 Dr Nabanita Saha of the University Institute, Tomas Bata University, Czech Republic gave the audience an introduction to her work in the development of magnetic insoles to help blood circulation in diabetic patients and the future prospects of ‘magnetic hydrogel’, a biomaterial that involved a polymer matrix. Prof. Rajat Das of IIT Kharagpur also talked about the development of highly stretchable, strong dual cross-linked self-healing hydrogels.