“September 24th 1982. I joined IIT Kharagpur as a Lower Division Clerk, giving in to my parents repeated requests. Today, after spending more than two-thirds of my life here, I do not regret the decision of my parents.

Rubber Technology Center had started the year before, in 1981. With no one to look into office work there, I was posted in that department as secretary to the HoD. My job profile consisted of mainly typing and maintaining office records. I stayed there from 1982 to 1987. With my promotion in 1987, I joined the Recruitment Section for a few days and was later transferred to the Deans’ Office. In 1989 I was posted in GATE office initially and then SRIC office. I served there for perhaps the longest time – from 1992 to 2006 – a good 14 years!

During my tenure at the SRIC office I was in the team of Enterprise Resource Planning (ERP) system which happens to be synonymous with IIT Kharagpur. This system was started by Prof R. N. Banerjee. We, as a team, were thinking of introducing a new system of documentation. ERP was initially a project mode of SRIC headed by Prof Banerjee and we were involved in providing all information to this pilot project for its smooth functioning – details of accounting, administration and project monitoring – all had to be fed into the project, which was further programmed by Prof Banerjee with the help of his students.

Since then, ERP has become an integral part of IIT-KGP system and has been upgraded continuously since the time of its inception.

It was during my tenure that the modernization of the SRIC office took place. What you see today is a complete rehashed version of what it was during the early 90s. A lot of brainstorming went into how to give the office a modern, corporate look. Under the leadership of Prof Damodar Acharya, the then Dean SRIC and Dr D Gunasekaran, the then Principal Administrative Officer (who was also the Registrar of the Institute), we visited a few corporate offices in Kolkata, to get an idea of a modern office set-up. We also concentrated on the work culture and environment, alongside a new corporate model. Workstations, with individual desktops were introduced along with in-service training for employees and new recruits. This included computer training, soft skill development training, training in office administration, rules’ implementation training and others.

After I took charge of the Establishment Section in the year 2006, the Institute took a policy to modernize all its administrative section on the lines of SRIC office. This called for a lot of effort, which had to be put in so as to get the desired infrastructure of a corporate office within IIT.

The best part of my service here at IIT Kharagpur would be the purchase of a piece of land from the Government of West Bengal to set up a Research Park, which will be operational very soon. I was one of the signatories in those official papers back in 2008.

We worked as a team under the leadership of Prof Samir Kumar Lahiri, the then Deputy Director and Prof. Anil K. Bhowmick, the then Dean SRIC, during IIT Kharagpur’s Golden Jubilee in 2001. It was a year-long celebration with an exhibition at Science City Kolkata, for three consecutive days. That huge event saw the participation of all departments of IIT Kharagpur, few industries and several colleges in Kolkata.

The work culture of the Institute was always highly appreciated by the guests / visitors to the Institute. Maintaining and nurturing a positive attitude to work and towards colleagues, I feel, is the need of the hour. Good conduct always pays off and it costs nothing. What do you say?” 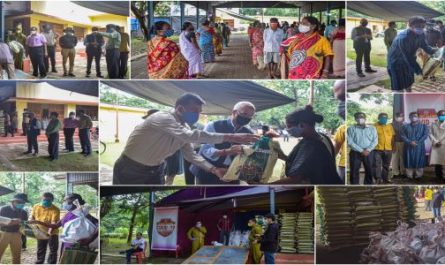