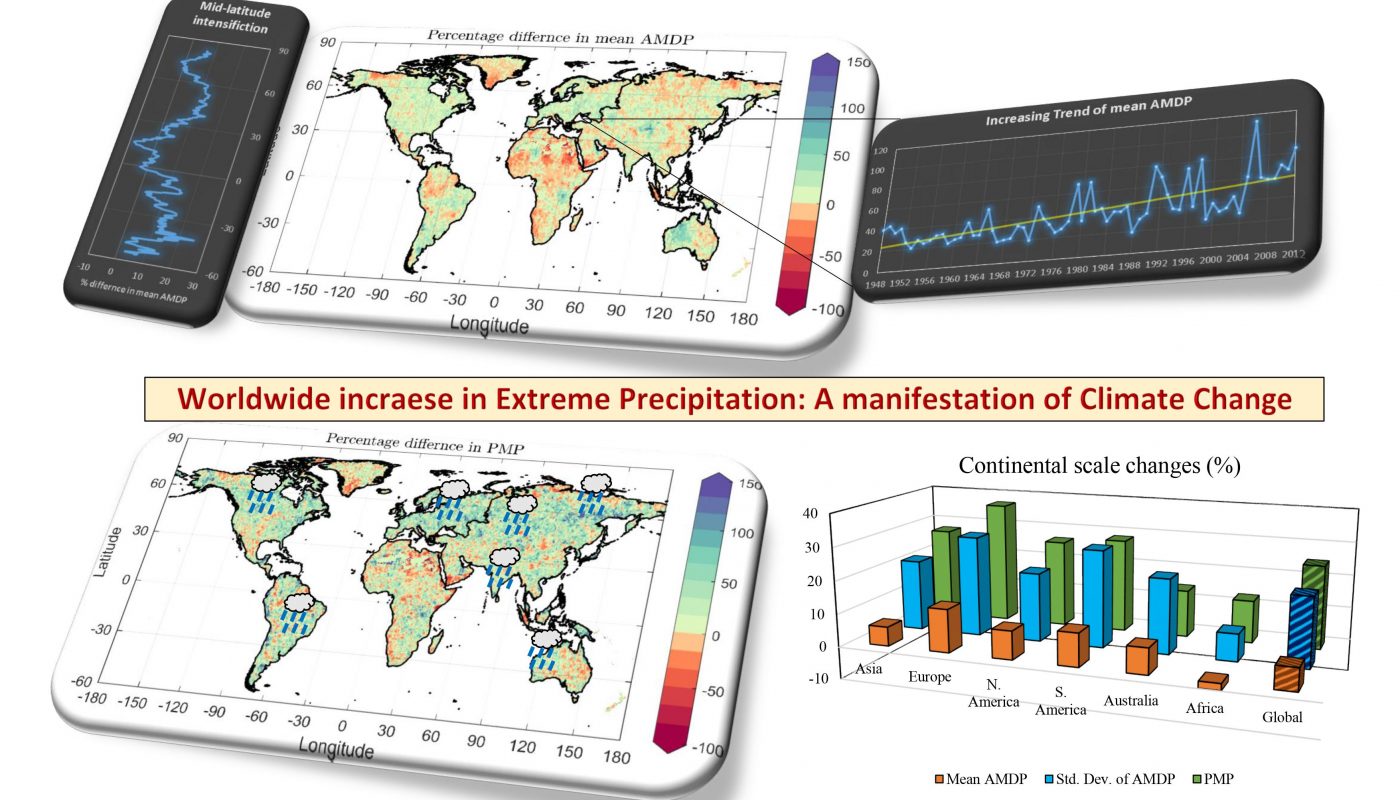 Since the 1970s, global climate change and consequent warming of atmospheric system have led to a significant increase in extreme precipitation across the world, revealed by the IIT Kharagpur researchers through a global analysis.

“The global climate change and consequent warming of atmospheric system have altered the regular spatio-temporal distribution of precipitation. Our researchers also found that, the extent of increase in precipitation extremes is comparatively less near equator and reaches peak around mid-latitudes.”, mentioned the lead researcher, Prof Rajib Maity, Department of Civil Engineering.

“Globally, the importance of AMDP and PMP is hydrologic planning and design is enormous. It ranges from flood assessment studies to design to high-risk high-cost water-energy infrastructures such as, dams, drainage network, flood management structures and even nuclear power plants.”, added Prof Maity.

“Intensification of precipitation extremes has resulted in substantial increase in Europe, North America and Northern Asia. Furthermore, the researchers have observed a similar increasing pattern in India, especially in the Southern peninsula, in contrast to the Northern Gangetic plain.”, said Prof Virendra Kumar Tewari, the Director of IIT Kharagpur.

AMDP is reported to increase for almost two-third of the global land area. The variability of AMDP is found to increase more than its mean that eventually results in increase PMP almost worldwide. Continent-wise, such increase in AMDP and PMP is true for all continents except some parts of Africa. The zone-wise analysis (dividing the globe into nine zones with uniform precipitation characteristics) reveals that zones of ‘moderate precipitation’ and ‘moderate seasonality’ exhibit the maximum increases in PMP.

“Recent increased in pole-ward heat and moisture transport as a result of Arctic Amplification (AA) may be associated with such mid-latitude intensification of precipitation extremes in the Northern hemisphere”, added Subharthi Sarkar, working under the guidance of Prof Rajib Maity as a Ph.D. Scholar.

Paving Way to Future of Mobility

What’s Next for MSME