BES is the best

In a remote boarding school in Kisoro, Uganda – the Seseme Girls’ School – lighted toilets had changed the way the girls lived. Around 86% of the girls felt safer using the toilet at night, given that they now felt protected from male attackers and insects in the lighted enclosures. Many, in fact, were now more interested in science and enjoyed learning about technology. 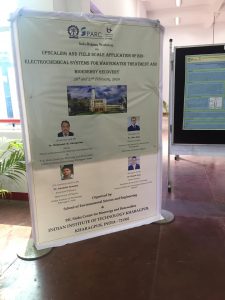 Why? This is because their toilets were now powered by microbial fuel cells (MFCs) that ran on “Pee Power”, that is human urine, and they were much enthused by this fact, even to the extent of wanting the technology to be extended to their villages.

This boarding school is not the only one where such urinals are being used. In the Mathare Valley slums in Nairobi and in the Thandanani area of Durban, South Africa, where shipping containers had been modified to house settlers, these “pee-powered” urinals have become a part of life. Such urinals had also been used, and progressively improved upon, to handle the rush of the Glastonbury festival from 2015, said Prof. Ioannis A. Ieropoulos of the Bristol BioEnergy Centre of the University of the West England, who has patented the technology that was also being extended to some of the refugee settlements in parts of Europe. 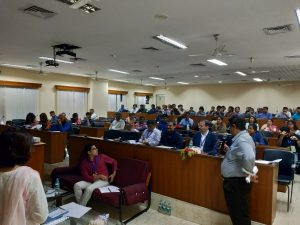 Like several speakers at the recently-held (Feb 26-27, 2020) Indo-Belgium SPARC workshop organized by the School of Environmental Science and Engineering and the P.K. Sinha Centre for Bioenergy and Renewables at IIT Kharagpur, Prof. Ieropoulous argued the case for MFCs – which used waste as its feedstock to produce bioenergy and other valuable products –  as a platform technology for multiple uses, including sanitation, renewable energy generation, production of value-added products via elemental recycling and wastewater treatment.

Prof. Ludo Diels of the Antwerpen University, Belgium, IIT Kharagpur’s international partner for the workshop, in fact insisted that in order to meet the goals laid down by the Paris Agreement, bio-electrochemical systems (BES) for wastewater treatment and bioenergy recovery from waste were indispensable.

MFCs are one popularly adopted configuration of BES and perhaps the most promising. However, like other BES technologies that are electrode-based systems, there are problems to its upscaling. The workshop held at IIT Kharagpur titled “Upscaling and field scale application of bio-electrochemical systems for wastewater treatment and bioenergy recovery” focused particularly on these problems.

For BES to be relevant and sustainable, the scientific community had to work on several of its facets. As Prof. Makarand M. Ghangrekar, convenor of the workshop and Head of both the School of Environmental Science and Engineering and the P.K. Sinha Centre for Bioenergy and Renewables at IIT Kharagpur, pointed out, to make BES competitive with existing technologies, “the yield of electricity/valuables recovery need to be increased with emphasis on decreasing the fabrication cost of this device.” Dr. Deepak Pant from the Flemish Institute for Technological Research (VITO), Belgium, summed up the other challenges – the development of electrodes without precious metals, direct recovery systems of produced molecules, membrane systems for direct gas diffusion, catalyst development and upscaling of the electrochemical systems.

Research groups at IIT Kharagpur under Prof. Ghangrekar’s supervision are looking at several of these problems. And these were highlighted at the workshop. For example, the research efforts undertaken at IIT Kharagpur on the development of low-cost ceramic membrane separator and non-platinum based electrode catalysts for application in MFC.

Also, the efforts undertaken to develop efficient electrode material for further enhancing the power production of MFCs and to develop understanding on upscaling the device. Using the outcome, Prof. Ghangrekar’s group had installed a pilot-scale MFC based onsite sewage treatment system inside the IIT Kharagpur campus and at NTPC, Netra, New Delhi. Efforts were also being taken at IIT Kharagpur to develop microbial carbon-capture cell (MCC) for effective wastewater treatment in anodic chamber and further post-treatment in cathodic chamber for harvesting algae to be used as feed stock for bioenergy production.

In addition, research is being undertaken to develop microbial electro-synthesis (MES) cell for CO2 reduction and synthesis of various high value organic compounds. Microbial desalination cells (MDCs) are being developed for simultaneous organic matter removal from wastewater and desalination to produce reusable quality treated water. Prof. Amreesh Chandra, Department of Physics, IIT Kharagpur, also highlighted how his research team had created hollow nanoparticles as catalysts for the treatment of industrial waste water and the detection of volatile gases. 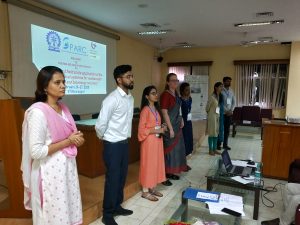 The Indo-Belgium workshop in fact brought to the fore new technologies and processes being developed by the scientific community throughout India and many parts of the world to improve the capabilities of BES. Like Prof. Ieropoulos, Dr Harold Leverenz of the University of California Davis, Ms Jeanne Sabin, also from the University of California Davis, and Dr S Gajalakshmi from the Centre for Pollution Control & Environmental Engineering, Pondicherry University, were working with human urine. Some of them were trying to see if pre-treatment of urine waste streams could optimize MFCs and maximize nutrient recovery from urine, which is high in nutrients. Others were looking to see if hybrid, self-powered super capacitive air cathode MFCs could be used for human urine treatment. 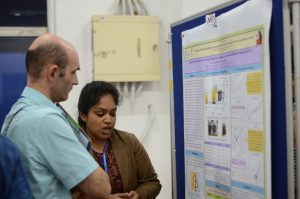 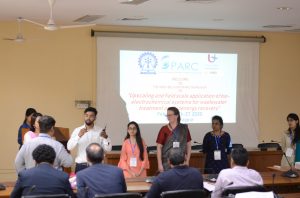 The most attractive feature of the workshop was the number of research scholars who talked about their ongoing work on different aspects of BES. As Prof. Ghangrekar pointed out, “more scientifically organized cross-discipline research efforts are required further to scale-up these [BES] systems to gain benefit of recovering useful energy/valuables from waste materials.” The Indo-Belgium workshop that showcased the ongoing work from different corners of the world, seemed to boost this effort.