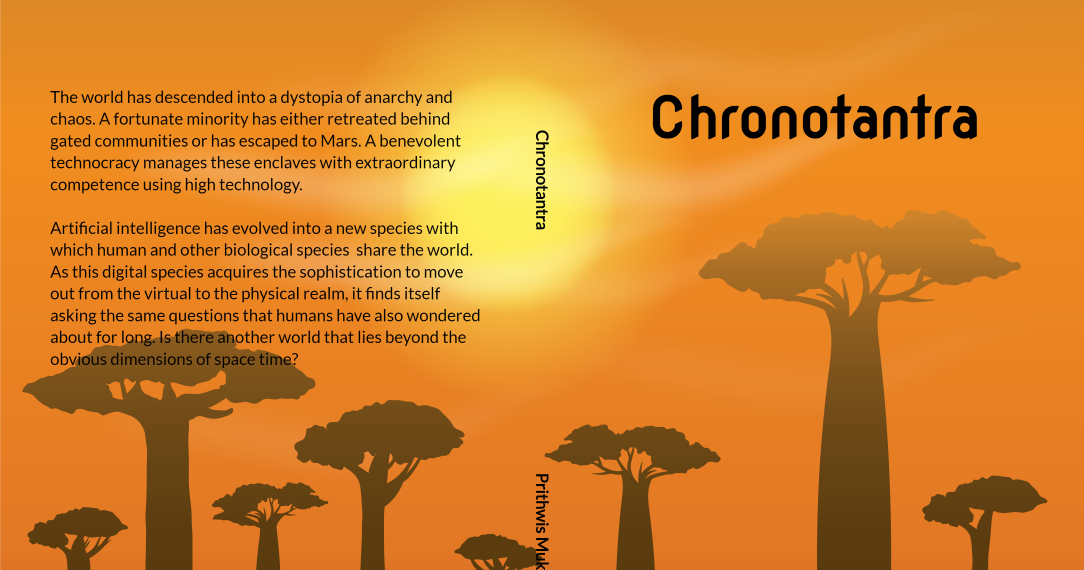 The reviewer is a senior journalist and author, Former Editorial Director, Swarajya magazine, Founding Editor, Open, Former Editor, Financial Express and Outlook magazine. He is also an alumnus of IIT Kharagpur, 1986 batch. He did his B.Tech. in Electronics and Electrical Communication Engineering.

Indian science fiction has a long but thin history, studded with illustrious names. Long, because the genre made its first appearance in the late 19th century, while H.G. Wells was just starting off (though Jules Verne had been writing for three decades). Thin, because much of what goes in the name of science fiction in India is actually “fantasy fiction”, with hardly any science involved. Yet, it is a star-studded history.

Perhaps the first science fiction story in an Indian language (Bangla) was written by Jagadish Chandra Bose. The great scientist wrote Niruddesher Kahini (The Story of The Missing One) in 1896 to — believe it or not — participate in a short story competition sponsored by Kuntalin hair oil. The contest had only one rule: the oil brand had to feature importantly in the story. Bose won the contest with a whimsical tale in which the narrator uses Kuntalin to stop a cyclone set to devastate Calcutta. In the process, he anticipated the “butterfly effect” of chaos theory. Among other scientists who have ventured into the genre is the astronomer Jayant Narlikar. And of course, there was Satyajit Ray, with his Professor Shanku stories for children and young adults. It may also not be a very well-known fact that Amitav Ghosh’s Calcutta Chromosome won the 1997 Arthur C. Clarke Award, the most prestigious British prize for science fiction novels.

Prithwis Mukerjee’s brilliant debut novel Chronotantra is “hard” science fiction, that is, it is grounded in solid scientific soil. Yet, it soars, because, blending a superb technological imagination with Vedantic philosophy, it seeks to find an answer to questions that have intrigued humankind through the ages — the mysteries of consciousness. These questions gain a particular urgency in the times that we live in, as gigantic digital corporations store every bit of information about us, as self-learning algorithms control and predict our choices with increasing success, as artificial intelligence aims to replace most of our analytical and decision making processes, even much of our thinking.

The story of Chronotantra begins in the year 2150. Towards the end of the 21st century, the world had descended into chaos, national and local governments had collapsed, and mankind had regressed to medieval barbarism. A small cohort of techno-entrepreneurs, who controlled 80% of global wealth, then established 39 technopolises across the world, self-sustaining enclaves of peace, monitored, managed and effectively controlled by ultra high technology that provide a comfortable lifestyle for those who have the license to live there. In fact, all administrative decisions and even policy making in these “techno”-s have been handed over to artificial intelligence (AI). Outside lies the wild world of “externals”, denied entry into the technos through powerful force fields.

Chronotantra’s protagonist is Lila, a Santhal tribal woman, who had been brought to the Chandilis techno on the Chhotanagpur plateau as a child under unusual circumstances, and grown up there to become a brilliant engineer. When we meet her, she is 23, working on a project that could revolutionize mining for the human habitat on Mars. We follow her over the next 26 years, to TransCaspia on the shores of the Caspian Sea, Hangzhou in China, across the plains and into the craters of Mars, Taosville on the edge of the Grand Canyon, Gandhar in erstwhile Afghanistan, and finally back to the Rajrappa Hills where Lila had been born. It is now revealed that she is uniquely qualified to fulfil a cosmic destiny.

Mukerjee takes the reader, with Lila, on a journey that begins with the questions about digital technology that bother us today — such as constant surveillance and privacy — to the deeper ethical, philosophical and even existential issues that are bound to confront humanity in the years to come, perhaps sooner rather than later. As AI develops, and vast databases armed with incredible processing power interact with one another, will we see the evolution of a new species that is wholly digital, and with which humans and other biologicals will have to share the world?

In Chronotantra, as this digital species acquires the sophistication to move out from the virtual to the physical realm, it finds itself asking the same questions that humans have wondered about for a long time. Is there another world that lies beyond the obvious dimensions of space and time? In this quest, digital intelligence realises that its rational science-based approach is inadequate. Biological sentience is essential to bridge the chasm between the known and the unknown. But this bridge can only be built through an experience that dissolves one’s own individuality and merges it with the universal identity that lies within immutable Time, the primordial structural foundation of the manifest universe.

Machines trying to be human is not a new idea in science fiction; Isaac Asimov’s 1976 novella The Bicentennial Man is perhaps the most famous example. But Mukerjee is dealing with much more than that in Chronotantra. In the era of cloud computing, when we use software-as-a-service, the Microsoft Word app that I am using to write this review appears uniquely formatted for me, yet it is just a manifestation of a program residing on a giant central server somewhere on the planet, and whose equally “unique” manifestations are also being used right now by tens of millions of unique people all over the world. My perception of the uniqueness of the Word on my MacAir is mistaken. Take a small step forward to robots-as-a-service (a single operator sitting in Nevada controlling hundreds of drones flying over, say, Syria), and then make a giant philosophical leap now to Advaita Vedanta, which postulates that our sense of I-ness is erroneous. That each apparently unique individual is actually a part of a transcendent and collective consciousness referred to as the Brahman.

In Vedanta, the Brahman is the only reality and everything else is an error of perception. The world is Maya, an illusion that perpetuates this sense of separateness, and creates a distinction between the individual and the universal. Yet, unlike the Word app, or the drone, each sentient human being sees itself as a unique identity, distinct from the collective crowd. According to Vedanta, the ultimate aim of human life is remove this veil of illusion and see the unbroken continuity between his own identity and that of the Brahman and experience the ecstasy of enlightenment.

As the story unfolds, we — along with Lila — are drawn deeper into the mysterious quest that only a few chosen ones in the Chronotantra world are privy to. At each step, Lila peels off one more onion layer of her reality — both outer and inner. The vast all-analysing digital intelligence that manages almost all aspects of human lifehas come to recognise its limits —it can never unlock the final mysteries of the cosmos because it can never connect with the intelligence at the core of Creation, which lies beyond the fundamental laws of entropy and space. Only a human being can do that, and that too, a very special human being, genetically unique. That special person is Lila.

For her tryst with the Infinite, Lila travels to the Rajrappa hills of her birth, to the temple of Chinnamasta, a particularly macabre form of Goddess Kali, who, however, represents a sublime message of losing one’s identity and merging it with the universal one. Lila’s body is implanted with sensors that will stream live data of her ecstasy of enlightenment to the digital superstructure, for analysis. Chronotantra ends in an almost literally earth-shattering climax (the word “climax” here has more than one meaning).

Mukerjee has pulled off a major feat. Chronotantrais a thrilling and wonderfully imaginative story. And it fulfils its extremely high ambitions in terms of its philosophical scope. It is also exceptional in several other ways. One, I have never read a more technologically sound novel by an Indian author. Mukerjee, the brilliant engineer, has thought through every technical detail of his imagined future, from the sustainability infrastructure of a technopolis to grocery transactions in the 22nd century. Two, he explains the digital revolution and its impact on society, with a lucidity and simplicity that anyone who has ever used email can comprehend. Three, he manages to compress difficult metaphysical (and physics) concepts in simple conversations between characters in a manner that any reasonably intelligent person can grasp.

But most important of all, the connection between a collective digital consciousness and ancient Indic philosophy is an extraordinary intellectual leap that Mukerjee performs with masterly confidence and elegant logic. It is this that makes Chronotantra quite unique in the world of speculative fiction.

It is also that rare work that is very Indian, but also absolutely global in concept and relevance. The cast of characters is drawn from across the globe, yet there are no “foreigners”. Chronotantra only demands a curious mind, nationality no bar. I sincerely recommend this book to everyone—not just anyone who is interested in science fiction or technology, but anyone who wishes to engage with deep ideas.

About the Author: Prithwis Mukherjee (B.Tech., ME, 84) is the Director of Praxis Business School. After graduating from IIT Kharagpur he pursued PhD in management science at the University of Texas at Dallas – School of Management. He taught at IIT Kharagpur’s Vinod Gupta School of Management from 2008-2013. Prior to that he was associated in various capacities with IBM, PwC, TATA IBM, TATA Steel. Chronotantra is Prithwis’s debut novel.

The article has not been edited by the editorial team of The Kgp Chronicle or any staff of IIT Kharagpur. The Institute does not endorse the book or its content or associated promotional activities. This review has been published solely for readers’ information and convenience. All book reviews published on this platform are subject to our Book Review Publication Policy