Since the 1990s, we have observed a rapid change in the urban landscape of Kolkata and the most significant impact has been in areas with extensive water bodies. In addition to the reducing surface water landscape in the city, there has been a considerable deterioration in the condition of the water bodies which thereby has led to the decline of the drainage and sewage system. Notable among these is the Adi Ganga – Tolly’s Nullah stretch, which continues to be the backbone of city’s drainage system.

The ‘khal’ or canal system of the city was once integral to the life and economy of Bengal. However, this system has almost been wrecked by unchecked construction, related land-fill, the lack of proper waste management and periodic maintenance. Experts in the domain of landscape urbanism have ruminated over the issue for decades, especially since the expansion of the Metro Rail project in that area. However, despite sincere efforts from government bodies, urban planners and targeted projects, attempts to revive the canal to its old glory is far from reality.

Experts from IIT Kharagpur and the Trust for Sustainable Education and Action in Architecture (SEARCH) New Delhi, are now approaching the issue from the hydrosocial perspective of the Adi Ganga – Tolly’s Nullah water channel. The stretch is dotted with temples, river banks, markets, and squatter settlements and the density and pressure of urbanization around this area is every increasing. In a 7-day workshop from December 21-27, 2018 the experts summarised that the rejuvenation plan of the canal need to involve innovative, realistic and resilient urban planning across physical and social dimensions.

The international workshop, held at the Salt Lake extension of IIT Kharagpur, tried to explore ideas to revive the spaces around Tolly Nullah. It shed light on the changing trajectories of Tolly’s Nullah using archival research, ethnographic findings and transect walks. It featured expert talks, site visits, studio interaction with mentors and experts. Finally, taking inputs from multidisciplinary intellectual exchanges, the workshop attempted to evolve effective recommendation strategies and ideas to revitalize areas around this disrupted and degraded network as an environmentally sustainable and socially inclusive space.

There is reason for hope. VSPB Associates, the knowledge partners of SEARCH, revived the Wazirabad canal in Gurgaon; In Seoul, an elevated highway over Cheonggyecheon creek, once dirty and neglected, was removed to turn the area around it into a lively arts district. “However, multi-faceted, trans disciplinary approach and planning is required to address the complex urban palimpsests that make way to Calcutta canals,” opined Prof. Jenia Mukherjee from the Department of Humanities and Social Sciences at IIT Kharagpur.

Well-known urban architects from SEARCH, Suptendu P. Biswas and Subhadip Biswas and environmental journalist Jayanta Basu emphasized on the need to consider the people of the city, especially those residing by the side of the canals, as inseparable part of the urban infrastructure since infrastructure did not merely involve the physical aspect of the city but also its cultural aspect. They pointed to the need to improve the canal spaces as “green lungs” of a dense city like Kolkata.

Suptendu P. Biswas, Chairman of SEARCH and a practising architect and urban designer from Delhi, said, “It is necessary to churn out new ideas so that people can visualize how derelict zones can be rejuvenated and brought back as public spaces”. Having learned positives from the international award-winning project in Gurgaon by his firm, VSPB Associates, he also emphasized the need for a separate autonomous canal improvement agency which would engage with users, government agencies and corporates. Along with Saurabh Tewari of SPA-Bhopal, Biswas has also edited a book, Blue Lines of Kolkata, based on the last SEARCH workshop on canals of east and north Kolkata.

Prof. Mukherjee of IIT Kharagpur and co-organizer of the workshop, said, “People often confuse Adi Ganga with Tolly’s Nullah. However, in 1777, Major William Tolly excavated only the upper stretch of the Adi Ganga, which is a very old river stream and once a major medieval outlet of the Bhagirathi river. Major Tolly canalized the old bed of Adi Ganga from its confluence at Hastings southeastwards to Garia, a distance of 8 miles. Then a new canal was excavated and carried further east to meet Bidyadhari river at Samukpota. The total distance was 17 miles.”

The water route lost its vigour since the 1960s although it still continued to be a discharging outlet for the southern part of the city. The once navigable canal gradually transformed into a mere ‘nullah’ due to non-restoration and non-maintenance. Thus, a heritage river was gradually transformed into a sewer. “Another aspect which surfaced in our exchange was the need to go beyond merely installing sewage treatment plants and find ways to revive the heritage river from Hastings to the Bay of Bengal,” said Prof. Mukherjee.

The workshop witnessed a multidisciplinary exchange, which involved inputs from government officials from the Kolkata Metropolitan Development Authority and the Kolkata Municipal Corporation, academics, environmental activists, journalists among others. It also involved students from India, USA and Bangladesh, who tried to see how best these corridors can be rejuvenated and to reconnect the dots between the canals and livelihood matters.

With empirical information from mentors and transect walks across stretches of the canal system, the participating students designed/created lively studios to animate the space on the three precincts of the Tolly Nullah- Alipur, Kudghat and Kalighat. After hearing out different views and rigorously mentored by the experts in the first few days, the students set out to conclude their ‘studio’ work on the three precincts of Tolly’s Nullah. Their work will be compiled as a document and presented by the organisers to the policy makers to be taken up as a blue print for future development.

Rishika Mondal from Jadavpur University, a student participant in the studio, said, “I realised during the studio work on Tolly’s Nullah that the urban space is multilayered and not linear like the way I used to see it. This helped us visualize the spaces around the Tolly’s Nullah, and then translate this vision into our document. This perspective will help me in my future assignments related to the urban space.”

Attending the meet, Prof. Partha Pratim Chakrabarti, Director of IIT Kharagpur, also pointed out that, “Trans-disciplinary work is needed to come up with new, innovative, and quickly implementable ideas, merging heritage with modern knowledge to gain the confidence of all the stakeholders.” 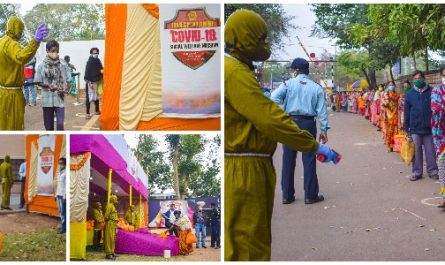 With You, We Are, As You Were: Year-long Relief Campaign by Alumni for Pandemic Affected Temporary Workers