IIT Kharagpur, an Institute of National Imporance will celebrate its 64th Convocation on July 20, 2018, an institution whose history runs parallel to the ultimate freedom movement of India after the World War II. From freedom fighters to personalities like Rabindra Nath Tagore, Subhas Chandra Bose, Satyendra Nath Bose, IIT Kharagpur in its 68 years of existence has witnessed the brightest luminaries from India and brilliant minds from across the world. The one occasion which shines brightest among all is the Convocation ceremony each year. This is the time when students along with their degrees take the blessings from their Alma Mater to pilot their lives. Probably, that is why the Directors of the IIT Kharagpur over the years, try to bid them a farewell in an unforgettable way inspiring generations of IITians, to be specific Kgpians.

The chief guests for the Convocation have quite a story to tell.

J. L. Nehru, the first Prime Minister of India, who was the Chief Guest of the first Convocation of the first IIT, inspired students to dare for the bigger things in life.

“If you indulge in small activities, in small things, then you remain small. But if you dare and go in for the really big things of life, then, even in your endeavour to realize them, you become big in the process” – he said.

What did Mechanical Engineer, Bhim Chandra Mandal think while listening to that speech or while receiving the President of India Gold Medal in the presence of the Prime Minister?

We tried reaching him, hopefully, will get you his experience soon.

The very next year in 1957 echoed the voice of Dr.  Sarvepalli Radhakrishnan, former President of India – “The alpha and the omega, the beginning and the end, we do not know. What we do know is the middle – between the beginning and the end; that is all that you know. Do not, therefore, attempt to say that things are understood by you.” Such a message could have come only from a brilliant educationist he was. To this day, the Institute celebrates his excellence in the Radhakrishnan Hall of Residence on Teacher’s Day.

This was the year, the first PhD degree was conferred in the IIT system. Dr. Sahadeb Banerjee, Assistant Lecturer from the Department of Chemistry was the recipient for his thesis on Polymerization and Co-polymerization of Vinyl. Just a year later, the first PhD degree to a student from IIT was conferred. The recipient was the legendary physicist and inventor Dr. Mani Lal Bhaumik. We do not know today whether the words of Dr. Radhakrishan reached them in person but golden words seem to carry the aura and influence the right minds.

In 1959, the first President of India, Dr. Rajendra Prasad graced the Convocation. Just a year before the first review committee for IIT Kharagpur was appointed by him.

In 1962 it was another President of India, whose speech perhaps, is critical in today’s context when higher education is looked upon as a resource for career development only and not evolving life itself. “Life is one long enchanting school; unfortunate, indeed, are those who go through it like truants,” said Dr. Zakir Hussain. While the year is marked for the Indo-China war, it also celebrated a victory. The number of girl students by this time has increased so much for them to have the first girls’ hostel at IIT Kharagpur – Sarojini Naidu Hall of Residence.

By the time IIT Kharagpur was completing its Silver Jubilee, engineering and technology education was taking a giant leap towards our time and may be beyond. While many of the alumni abroad was establishing brand IIT while their alma mater was setting up new disciplines such as Reliability Engineering, Industrial and Systems Engineering, Cryogenic Engineering, Materials Science in late 60s and early 70s which were soon followed by the popular discipline of Computer Science and Engineering by the end of the decade.What might have the Smt. Indira Gandhi commented about these transformations when she visited IIT Kharagpur as the Chief Guest of the Convocation in 1976? Some memoir could tell a story. But Shri Harimohan Pillai who was a third year that time at the Department of Architecture and Regional Planning and was part of the reception committee of the Prime Minister shared a unique experience. During her visit, due to strict protocols of the visit by the heads of state, a shop in his hall of residence was displaced. Pillai wrote about that incident to the PM. When he came back to the campus after the Summer recess, he not only found the shop has been rebuilt as per instruction from the PMO but he was made to inspect and give certification of satisfaction for the newly built shop. After reaching his hostel room he found a letter from PMO! It read: 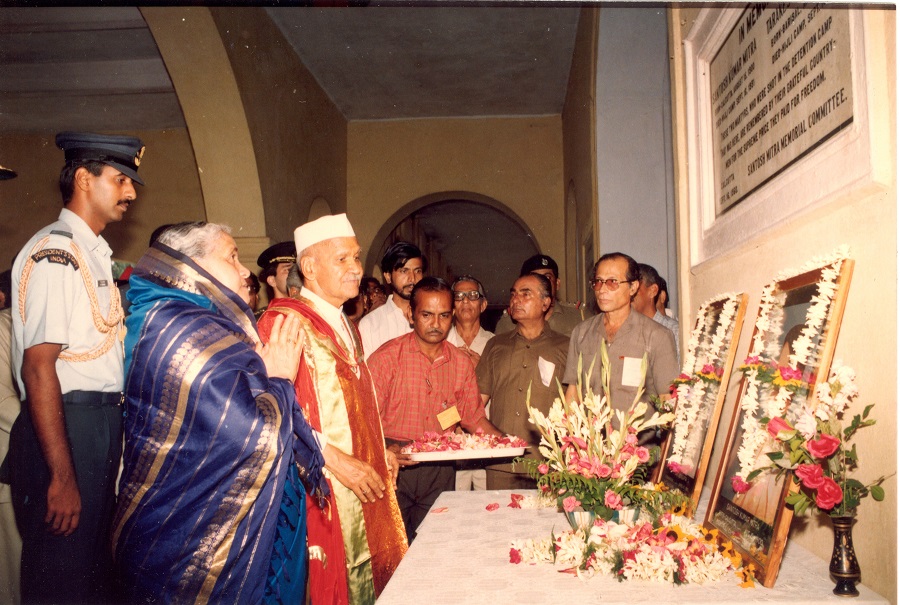 By 1994, when the President of India Dr. Shankar Dayal Sharma visited, IIT Kharagpur was on its way to becoming a multidisciplinary institution. This was the year the Vinod Gupta School of Management, the first management school in the IIT system was set up and the foundation stone of the School’s building was laid by Dr. Sharma. The First Lady and Dr. Sharma Dr. paid homage at the Hijli Shaheed Bhavan at IIT Kharagpur. Vinod Gupta School of Management is adjacent to this grand old building from the pre-independence era. 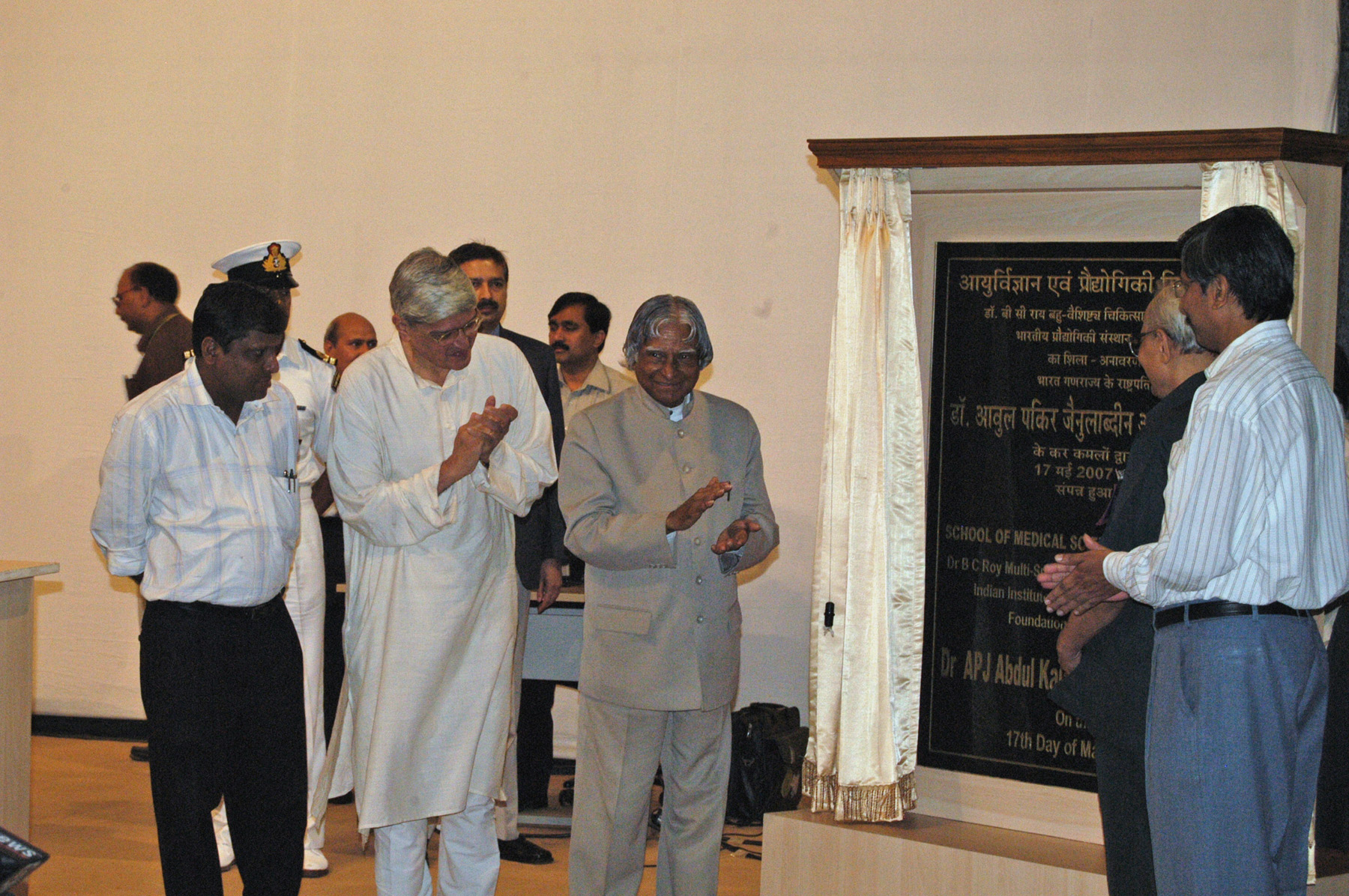 The very next year, in 1995, the degree recipients witnessed the brilliance of the Missile Man of India. Pokhran-II explosions were yet to happen, but Dr. A P J Abdul Kalam, the former President of India was not just an inspiration but extremely popular among the students’ community. Years’ later he visited the Institute once more to inaugurate the School of Medical Science and Technology. 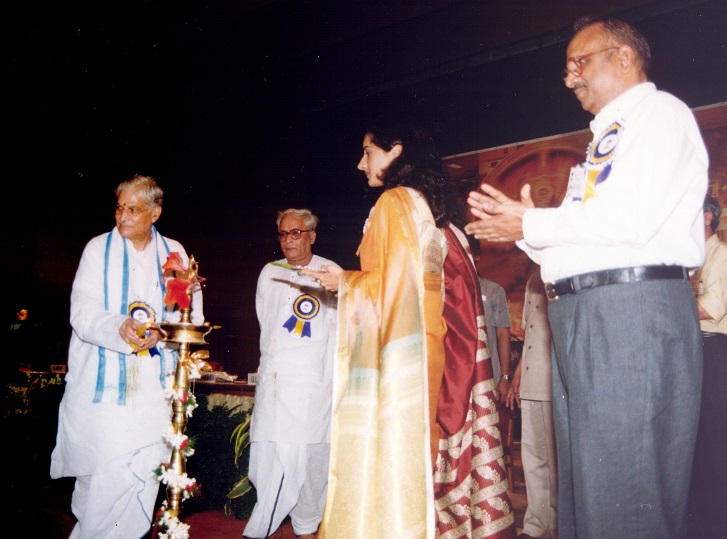 The year-long Golden Jubilee celebrations of the Institute which were completed with the Convocation in 2002 was attended by Dr. Murli Manohar Joshi, the then Minister of Human Resources Development. He inaugurated two main extensions of IIT KGP, Takshashila and Vikramshila, which house the several schools and centers, auditoriums and lecture halls of the Institute. Dr. Joshi conferred the Life Fellow Award, instituted by IIT Kharagpur that year, to illustrious alumni Arjun Malhotra, Vinod Gupta and Suhas Patil and wellwisher and philanthropist Bijoy Chatterjee. 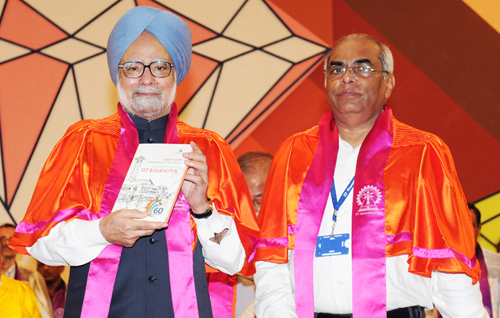 The Diamond Jubilee celebration of IIT KGP which began in 2011 was presided by Dr. Manmohan Singh, the then Prime Minister. “IIT Kharagpur can provide a fertile breeding ground to drive innovation by creating a strong R&D environment and entrepreneurial support systems” he said. Thus idea germinated for the IIT KGP Research Park at Kolkata.

The celebrations ended in 2012 with Dr. Pranab Mukherjee, who held the office of the President of India at that time. He announced Rs. 200 crore grant for the development of IIT KGP and the establishment of the superspecialty hospital. He welcomed the initiative of IIT KGP to offer new degree courses and programs in order to lead from the front and to keep pace with the growth and development of science and technology. The Former President emphasized on global rankings of the IITs and the higher educational institutions in India.

The Institute is now gearing up for the visit of Shri Ram Nath Kovind, the current President of India as the Chief Guest of the 64th Convocation.

Prof. P P Chakrabarti, Director of IIT KGP said “I am glad the Institute has been leading is several large projects in the area of education outreach and technology development such as National Digital Library of India which was formally launched few days back, the Research Park at Kolkata, the superspecialty hospital which will be a hub of research in medical science technology. We are also making significant efforts in establishing integrated programs with top institutions in India and abroad which is going to redefine Indian higher education, research and industry. We are looking forward to the vision which the President of India would be sharing with us during this visit.”

The do’s and dont’s being rolled out for the insiders. Tweets and flashes of the visits are all over. But the real charm is always felt among the students who numbered at close to 2400 will be receiving their much coveted IIT degrees in the presence of the heads of the nation.

“It is an experience a person gets once in a lifetime, never to be forgotten,” said Rahul Goel, a graduating student who will receive his B.Tech. degree in Mechanical Engineering. Rohan Gupta another graduating student from Geology and geophysics is feeling privileged to receive the degree in the presence of Shri Kovind. “Of course the excitement is a lot more and we hope there is some good news to arrive with him as well” hoped both. Asish Koruprolu who will receive his B.Tech. degree in Electronics and Electrical Communications Engineering and thereafter head for Stanford University in his candid mood trying to make his friends jealous. “Aaj mere paas IIT KGP ka degree hai, Stanford admit hai, Convocation mein President of India hai, aur maa-baap bhi hai, tere paas kya hai haan? (Today I have a degree from IIT KGP, admit at Stanford University, the President of India attending on our Convocation and I have my mother and father as well, what do you have?)