Under the aegis of Azadi ka Amrit Mahotsav, the Centre of Excellence for Indian Knowledge Systems (CoE-IKS), IIT Kharagpur organized an international conference on Indian Knowledge Systems – The Bharata Tirtha II from 14th to 18th June, 2022 in association with department of Physics, IIT Kharagpur and key knowledge partners including Indian History Awareness and Research (IHAR) Houston, USA, IHAR India, DHARA, Ode to Indian Knowledge System, the Ministry of Culture and Ministry of Education, Government of India. The conference which is a continuation of the programme Bharata Tirtha – I organized in November 2020 in association with Ministry of Education, was conducted in a hybrid mode in Gargi-Maitreyi Auditorium Complex of the Institute. The invocation ceremony witnessed the footfall of eminent speakers and experts including Mrs. Priyanka Chandra, Director, Ministry of Culture, Prof. Virendra Kumar Tewari, Director, IIT Kharagpur; and Prof Amit Patra, Deputy Director, IIT Kharagpur. 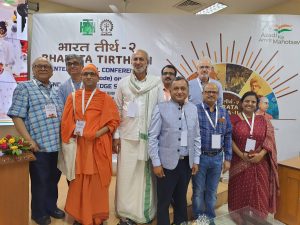 The following session conducted a debate on content and chronology of Indian history and a talk on Ayurveda – Revisiting traditional medical system in the light of modern science and technology on 15 July, 2022.  Dr. Subroto Gangopadhyay, IHAR, Houstan, USA, Dr. Vedveer Arya, DRDO & IHAR, Dr. Mradu Gupta and many other renowned connoisseurs shared their insights on Indian Knowledge Systems. A special team from Vishva-Bharati, Santiniketan encapsulated the audience with a session on Tagore. A video show on water resource planning in Indian context, globalization and urbanization with built and semi-built architecture along with Bangabhumite Ramayana –  Indology through South-East Asian perspective was hosted the next day. On 17th July, a special session regarding the history of civilization identity was led by Sri Sanjeev Sanyal, former Principal Economic Adviser, Ministry of Finance; Prof Joy Sen, Chairman, IKS, IIT Kharagpur and Prof. Somesh Kumar, Mathematics, IIT Kharagpur. Sanskrit – A tool to access Bharatiya Jyan Parampara and the Holism of Yoga were also included for panel discussions. A sarod recital on Indian Music & Physics by Shri. Siddhartha Bhose, a Physicist & a renowned Sarodist was organized by EZCC, Ministry of Culture. The event concluded with a Khagol Vigyan session in association of Ministry of Culture, Government of India along with panel discussions on Raman Effect, Quantum Physics, pioneering Indian contributions on Black Hole and Prof Thanu Padmanabhan’s contributions in Astrophysics and Cosmology.

Prof V K Tewari, Director, IIT Kharagpur stated, ‘Bharata Tirtha II has forwarded the narratives, the folklore and deep ecosystems that embed our heritage systems, heritage tourism as a deep pilgrimage and the assimilation of cultures beyond races and genetics dethroning both racial biostatistics and eugenics that so far guarded the erroneous Aryan Invasion Myth. IIT Kharagpur in association with Ministry of Culture will soon plan a series of programs under DHARA – the flow for Indian Knowledge Systems to take the relevance of ancient Indian wisdom to various colleges and school children in the country.’ 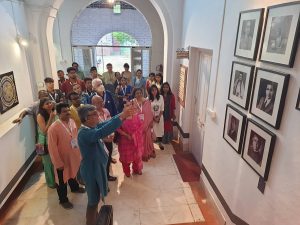 “India is the motherland of our race, and Sanskrit the mother of European languages: she was the mother of our philosophy; mother, through the village community of self-government and democracy,” said American historian Will Durant in his book, ‘The Case for India, 1931’. With Bharata Tirtha II, IIT Kharagpur has proclaimed that Indian Knowledge Systems (IKS) is not a nostalgia of the past but seeks the relevance of the primitive cultures of traditional knowledge systems & ancient wisdom in contemporary times. IKS synergize modern scientific knowledge with Indian art, architecture, sociology, culture and language as envisaged by National Educational Policy 2020. It should not be just a value additive process, but a main stream pedagogy for the future generations.

In the closing and valedictory program that was embellished by the presence of Mrs. Shreyanka Basu, Director, Museum, Ministry of Culture, Prof. Joy Sen, the Convener of the conference and the Chairman of the chairperson of the Centre of Indian Knowledge system, IIT Kharagpur remarked, “The emphasis on creative economy based on the eternal principles of Indian community ethos of ‘small is beautiful’, ‘restraint based on less in more’ based on farm and cottage stead economies, is a solution to the looming economic crisis in the modern age. The current advances in Quantum Sciences, Quantum biology and Astrophysics begin to match the ancient wisdom of Indian Sages based on the principles of involution and evolution, Krishna and Sukla (black and white) lineages of Cosmology and the evolution of consciousness in it.’