Researchers at IIT Kharagpur have developed energy-efficient pest controlling device for smaller agricultural tracts owned by marginal farmers. The research team has developed a self-propelled boom-type sprayer that can be operated using solar energy while safely guided through the crops in smaller tracts of land. The device is aimed to increase field capacity and uniformity in liquid spraying and also to reduce drudgery to the operator and dependency on fossil fuel for carrying out spraying in cropped areas.

Prevention of pests and diseases during different growth stages of crops is an important process to increase its yield. For larger tracts of farmlands, tractor mounted sprayers are used, while manually operated knapsack sprayer is used for smaller tracts. This impacts the efficiency of spraying as it depends on the skill of the operator leading to non-uniformity in spraying. Further, it requires intensive labour capacity and operation time. Using tractor-mounted sprayers in smaller tracts on the other hand would make the crops prone to damages due to their higher turning radius. Also, it leads to the wastage of chemicals due to lower control on automated spraying. Not to mention the environmental pollution due to the fuel emissions from the tractor.

It is important to note, about 82% of the farming community are categorized as small or marginal as per FAO with landholding less than 2 hectares [Ministry of Agriculture & Farmers Welfare, Govt. of India, 2019]. With a view to improve the condition of small and marginal farmers and to double the income of farmers by 2022, Government is realigning its interventions from a production-centric approach to farmers’ income-centric initiatives, with a focus on better and new technological solutions.

“This is an open call to the technical institutions in India to deliver in the field of precision agricultural technologies. In the IIT system, IIT Kharagpur has the sole distinction of having an Agricultural & Food Engineering department. Hence it is our foremost responsibility to answer this call,” opined Prof. Virendra K Tewari, Director, IIT Kharagpur. 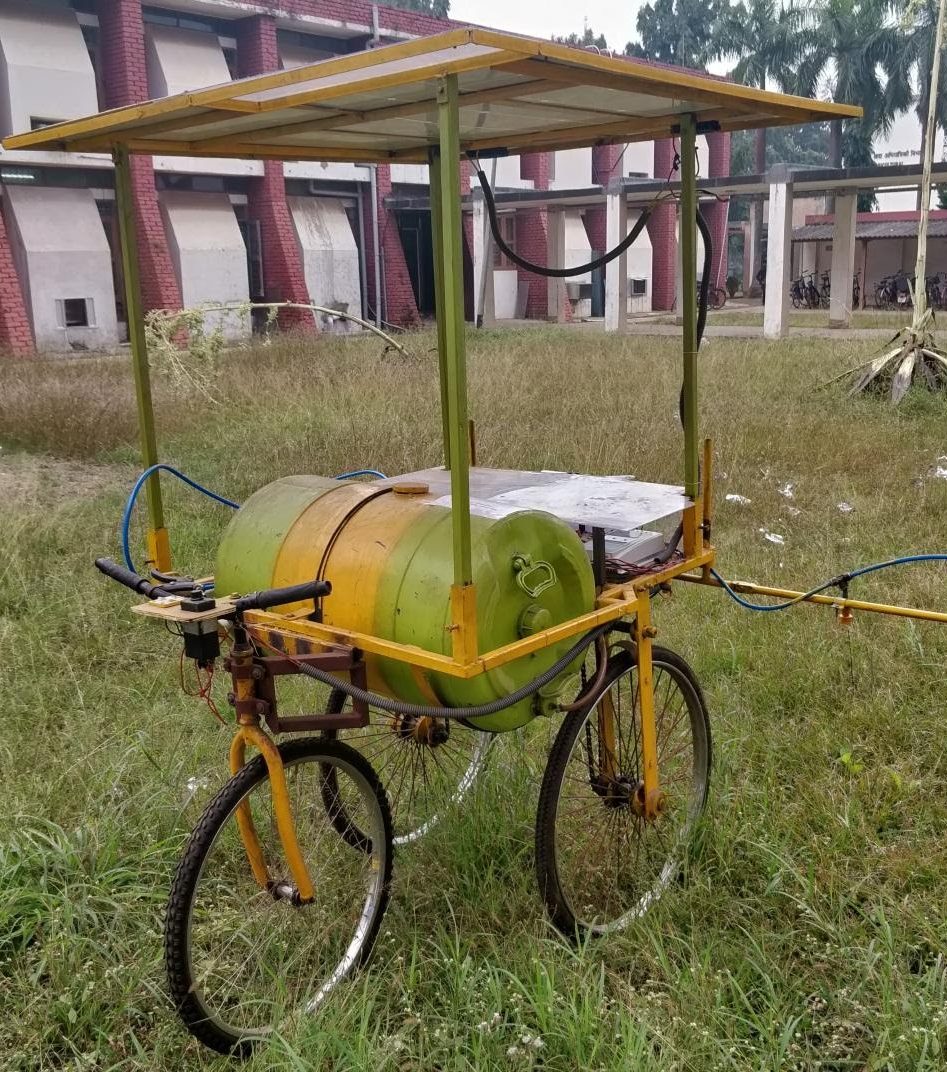 The semi-automated device developed by Prof. Hifjur Raheman, Anup Behera Rahul K and Prof. P.B.S. Bhadoria from the Dept. of Agricultural and Food Engineering at IIT Kharagpur will address several challenges of the mechanized pest control systems in the small farm sector.

The system comprises a propelling unit fitted with a liquid storage tank, a DC motor operated pump to pressurize the liquid to be sprayed. Multiple numbers of spray nozzles are mounted on a boom fitted to the front of the machine to cover wider width at a time. A set of solar-powered battery act as the power source of the DC motor to propel the spraying unit as well as for running the pump. Unlike a knapsack sprayer, the liquid storage tank is of bigger capacity and it is carried on a solar-powered three-wheeler trolley. An operator is required to control the movement of the spraying unit. A simple arrangement has been provided to vary the height of spraying (i.e., nozzle height from the ground) to carryout spraying for different heights of crops. Solar panels are mounted on top of the machine to provide continuous power supply during operation through the Maximum Power Point Tracker controller and it also provides shade to the operator during spraying in the field.

“As compared to conventional knapsack sprayers, the developed sprayer has a higher field capacity and more uniformity of spraying with less drudgery to the operator. It can be easily operated in the field using solar energy with a maximum speed of 2 km/h and can cover a width of 1.5 metre at a time with a field efficiency of 81% thus saving time, human involvement and chemicals,” remarked Prof. Raheman.

The researchers have filed a patent for the product and it is ready for commercialization.

Director Tewari who is also a leading expert in the field of farm machinery and power engineering said, “We have developed several such technologies covering micro-irrigation, shed net cultivation and food processing at the Dept. of Agricultural and Food Engineering which are in use in various villages across the 23 districts of West Bengal and other states in Eastern India, covering almost 20000 farmers. Such innovations empower each member of the farming community following the pathway towards Atmanirbhar Bharat.”