Chronic Obstructive Pulmonary Disease (COPD) is a common chronic respiratory disease caused by exposure to harmful gases and particulate matters, with a high health burden on the country’s healthcare services and society. For long, the medical community has been depending on patient history and clinical symptoms for disease diagnosis, which often prevents early detection of the disease and advancing of the disease adds to the medical bill through frequent hospitalizations. 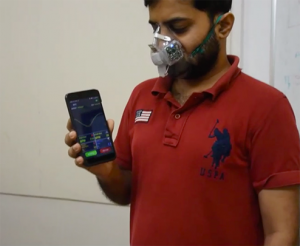 At the Organic Electronics Laboratory (ORELA), Department of Physics, IIT Kharagpur, Prof. Dipak Kumar Goswami and his research team have developed SenFlex.T, a smart mask synced with an android monitoring app through Bluetooth, that can continuously monitor breathing patterns, rate, heart rate, oxygen saturation level in blood. The app is connected to a cloud computing server, where artificial intelligence (AI) has been implemented to predict the severity of COPD through machine learning (ML). 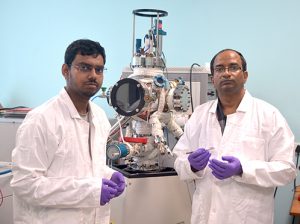 “SenFlex.T can be used at home by patients without having to visit diagnostic centres as against the current practice. This will also address the critical issue of addressing COPD at an early stage and by means of advanced healthcare technology, a boon for both patients and the overall healthcare system,” explained Prof. Goswami.

Chronic Obstructive Pulmonary Disease has been a top cause of death, second to only deaths due to heart diseases. In 2017 it claimed about 1 million lives in India. In October 2019, health experts, at a medical convention, confirmed that COPD claims more lives than AIDS, TB, Malaria, Diabetes all put together. The threat from COPD has become more acute under the COVID situation, with increased comorbidity rates. A recent survey confirmed that the severity and mortality rates among COPD patients to be affected by the COVID-19 virus are over 63%. Moreover, the patients affected in the COVID-19 virus, which is right now over 4 million people in India and 27 million in the world, are more susceptible to build up various lung disorder-related diseases like COPD, Asthma etc.

“It was crucial for health-tech researchers to develop a diagnostic intervention for Chronic Obstructive Pulmonary Disease. Spirometry, the gold standard test to diagnose obstructive airway diseases like asthma and COPD, is often avoided due to the unavailability of the equipment, difficulty in data interpretation and the cost of the tests. This challenge and the criticality strongly motivated us to develop an AI-based system, that can overcome the problem of interpreting the results and be accessible not only for the doctors but also for the patients,” said Prof. Goswami. 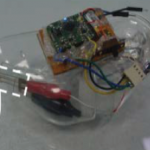 SenFlex.T smart mask contains a highly sensitive, flexible temperature sensor along with a Bluetooth based measuring electronics. The sensor system can continuously monitor the temperature changes of inhaled and exhaled air during breathing and record the breathing pattern. The temperature sensor has a resolution of 4.3 mK and about 25 ms response time. Further, a commercially available pulse oximeter has been integrated with the sensor system to monitor the oxygen saturation level during breathing. 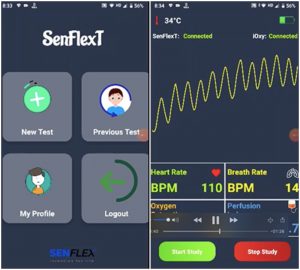 The patient data is uploaded automatically to the cloud server through the mobile app (SenFlex), where it is processed by means of AIML, and reports made available on the app and for doctors’ consultation.

The innovation has been reported in the international journal ACS Applied Materials & Interfaces [Download Paper]. The researchers have also filed a patent for the innovation and are ready for commercialization. The product cost has been estimated at about ₹ 2,500/-.