The Baluchari sari has long been accepted as a reflection of Bengal’s rich artistic heritage. Does this idea of heritage also stretch to lives of the people who make it? Would this heritage have been preserved without their role in the sustenance of this art through their generational participation in its making? Would Chhau dance, another unique heritage of Bengal, survive if the next generation of Chhau dancers do not learn the dance? When the Rajbanshis in Balagarh, a hamlet in Chinsurah along the Hooghly River that has produced boats for more than four centuries, give up their craft, will it not signify a fracture in Bengal’s centuries’-old riverine history that produced its cultural heritage?

Academics from IIT Kharagpur and beyond, activists, conservationist architects, and research scholars revisited these questions and raised new ones as they participated in a unique workshop titled “Urban Riverine Heritagescapes of Bengal: From Nostalgic Yearnings to Visions of a Resilient Future”, on January 28-29 organized by the Department of Humanities and Social Sciences in collaboration with the Rekhi Centre of Excellence for the Science of Happiness.

They not only agreed that cultural heritage is not confined to monuments and objects, but that it included traditions inherited from ancestors and passed down generations – such as the oral traditions, unique crafts produced by any particular community, performing arts, social practices, rituals, cuisine, festivals, knowledge and practices, and skills. In other words, that cultural heritage constituted both their tangible and “intangible” evidences. But they together emphasized that this heritage can only be sustained through intercultural dialogue, or “polylogue”, mutual respect, and the involvement of the community or common people. For unless it is recognized and valued as heritage by the communities, groups or individuals who create, maintain and transmit it, heritage cannot survive.

To facilitate this, the organizers of the workshop, Prof. Jenia Mukherjee and Prof. Anway Mukhopadhyay sought to promote the idea of ‘heritagescapes’, borrowing and furthering the concept of ‘scapes’ of noted anthropologist Arjun Appadurai, who showed how knowledge and culture flowed across different ‘scapes’ across the world instead of the binaries of North/South or East/West. “It is within such a framework of critical heritage studies which locates the heritagescapes within concrete (local as well as global) social and economic relations that one can situate the cultural heritage constellating around the urban riverine systems of Eastern India, especially Bengal,” explained Mukherjee and Mukhopadhyay, Assistant Professors, HSS Department. 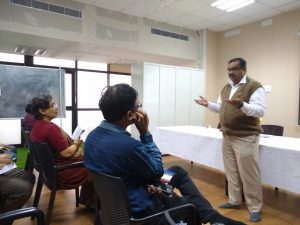 The workshop, in fact, grew out of Prof. Jenia Mukherjee’s experiences with handling the ‘Hugli River of Cultures Pilot Project, from Bandel to Barrackpore’, a recently concluded project jointly funded by the by the Arts and Humanities Research Council, UK, and the Indian Council of Historical Research. Looking at the five former trading posts and garrison settlements along the Hugli River – Bandel, Chinsurah, Chandannagar, Serampore and Barrackpore – the project tried to evolve a sense of the ‘Hugli corridor’ by drawing on the collective history of the stretch and the role of the River in this geographical space.

That people are the ‘owner-custodians’ of Bengal’s heritage, and that even the quotidian heritage deserved to be preserved, was a key understanding that evolved from this work. It was this understanding that Prof. Mukherjee wanted to disseminate through the workshop.

The ‘river’ figured prominently in the workshop as it focussed on a cultural heritage that is largely a product of the historical experience, unique ecosystem and social, political and economic interactions fostered by the riverine system of Bengal. And not only because of that. The river, explained Prof. Partha Pratim Chakarabarti, who laid out the theoretical underpinnings of the conference, also encapsulated the true meaning of heritage. “River stands for the continuity, the flow of heritage. It gives the sense of timelessness and the idea of infinity… It is fluidic, continuous, in its upper motions, yet deep down it is still, unchangeable. Heritage is like that. It moves, changes with time, but it has stillness and steadiness, and yet it has that churning from which new things mingle the new with the old,” said Prof. Chakrabarti. Drawing from her empirical pool of project expertise, Prof. Sanghamitra Basu introduced the coupled nature-culture dimension to tap multiple meanings and interpretations making way to ‘heritagescapes’. 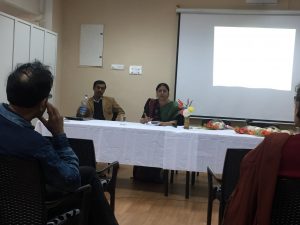 To make the workshop lively and bring out the heritage-livelihoods connect, fishers from Sundarbans were invited to exhibit and narrate stories surrounding artefacts and ornaments designed by using marine fish scales.

The organizers plan to not only come up with a publication but design and develop feasible project proposals involving academia, policy circles, civil society and user groups in the future. “The Rekhi Centre of Excellence for the Science of Happiness will also come up with an exhibition to mobilize students and heritage experts and conservation agencies by April 2020 as an outcome or continuation of this workshop,” said Prof. Priyadarshi Patnaik, Head, Rekhi Centre, who was a key speaker and organizer of the workshop.