Adoption of micro-irrigation system in the country rose from a meagre 1500 hectares in the 1980s to nearly 86.21 lakh hectares in 2016, yet the technology adoption is confined only to 18 States and the area is negligibly small in most of the eastern and North Eastern States. Presently, this technology is in vogue only for very few crops. Among the horticultural crops, drip technology is adopted mostly, in fruits with a penetration of 34%. This is followed by vegetables (14%), plantation crops (13%), coconut (12%). citrus (10%), spices (8%), and all other crops individually contribute to less than 10 percent of the area under the drip. There is a need to expand the technology to many other fruits, vegetables, and cash crops.

While considering the fact that the large numbers of farmers of West Bengal are small landholding farmers (< 2 acres), the PFDC developed a small-scale micro-irrigation system to promote the system. Overhead tank drip irrigation system designed and the pedal-operated pump and nano solar pump were introduced in place of the power-operated pump to lift the water to the overhead tank. Adjustable flow emitters were developed to control and vary the drip discharge according to the requirement of plants. Dual components drippers and single component drippers were designed and developed, which reduces the requirement of plastic material and also the cost of emitters. Sweat irrigation technology was also developed to reduce the cost of drip laterals and emitters.

The experimental findings and developed technologies were transferred to farmers’ and other stakeholders through workshops, short term training courses. More than eleven thousand farmers, Officials from the Govt and Non-Government organizations were trained through two hundred sixty-six training programs, workshops and mass awareness camps. The training programs were conducted to disseminate knowledge about the benefits of micro-irrigation techniques. Farmers were also trained on the micro-irrigation components, design, layout, installation, maintenance and repair of micro-irrigation system and components, etc.

PFDC demonstrated and provided technical support to farmers’ fields of different districts of West Bengal to promote MI technology. Including demonstration, Field visits and surveys were conducted at regular intervals to know the issues on the implementation of MI technologies on horticultural crops in different parts of West Bengal. 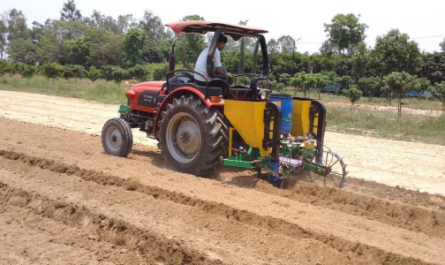