A few weeks prior to Facebook’s Meta announcement plunged the world into a new era of social
media connectedness and metaverses, some of the most brilliant minds of the country were
competing to create metaverse technologies of their own in the 2021 Samsung Innovation Award
Silver Jubilee Edition.

This year’s competition was won by Ojas Deshmukh, a third-year dual degree B.Tech
Biotechnology student at IIT Kharagpur for his Betaverse project. He is also the Managing Head
of Computer Graphics Society and a Head at SWARM Robotics at the institute.

The project intends to act as a platform that users and developers can use to engage or participate
in the metaverse. It attempts to create such a framework that can be leveraged by developers to
publish their works on a single unified free platform, forming a base to build a metaverse. The
platform can host multiple games in the same spot while being flexible enough to allow users to
create their own personalized metaverse without any additional effort on the developer side.

Before diving deeper into the Betaverse, let us briefly familiarize ourselves with the Samsung
Innovation Awards and what exactly is a metaverse.

The Samsung Innovation Award
Since 2011, the Samsung R&D Institute India in Bengaluru has been organizing the Samsung
Innovation Award to encourage research, innovation, and entrepreneurship in the student
community. It supports talent who can present an innovative approach and develop solutions,
products that can solve real-time social problems. Students in teams of 3 from the same institute
participate, brainstorm, innovate and present their work. This year teams from approximately 12
IITs participated in the competition.

The theme for the 2021 edition was the ‘Metaverse’. Students were asked to explore the
intersection of physical, augmented, and virtual reality. They were asked to present working
prototypes and demonstrations on their ideas on AR / VR, Vision, Multimedia & Graphics, Photo
Realistic Rendering, 3D Spaces and Reconstruction, Immersive Multimodal Interaction Systems,
and other enabling technologies like Communications, Sensor Networks and Common Interfaces
The scope included experiences in gaming, art, entertainment, live events, tourism, health,
education, marketing, digital payments, etc.

A Little More On The Metaverse
The metaverse is essentially any virtual reality space on the internet that is accessible through
PCs, virtual and augmented reality headsets, and on select gaming and chat platforms. The term
was coined and popularized through the 1992 dystopian sci-fi novel by Neal Stephenson, Snow
Crash.

Presently, the metaverse addresses technological limitations through virtual and augmented
reality equipment. It is also centered on the expansion of metaverse spaces to education, retail,
entertainment, business, and research. 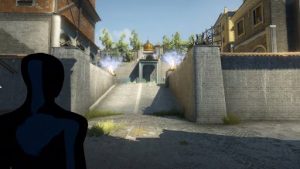 The beta for any application is a preview build that adapts and changes based on the users. In
simple words a testing ground for a product before it is launched. The open-world scene in the
project allows users to customize and personalize their “virtual worlds” in the form of asset
bundles, thereby creating a unique Betaverse experience for themselves.

Moderators can create a world by requesting a build token that gives them authority to create
positions for developers, who can share Asset Bundles on any third-party site, which will be
downloadable and used on the user’s end during runtime. The project will not control the
Content Delivery Network or the Asset Bundles that are used. Developers can create their own
ecosystem within the Betaverse and build many worlds in it.

The Betaverse is built using the Unity Game Engine, taking inspiration from games and
simulators like Kerbal Space Program, where “mods” can be added simply by placing packages
in folders; it can accept all forms of Asset Bundles from third party websites. It will eventually
be made open-source.

The prototype was demonstrated by including a multitude of subsystems, essentially becoming a
testament to the versatility of this framework. Mirror was used to enable a large client-server
connection and support traffic for the multi-player system. GPU rendering was used to get better
framerates and support particle effects. Compressed height, albedo, and normal maps are used to
optimize the experience. Ads were inserted by merging textures and searching a list for
keywords, which has the option to be replaced by NLP and Google Speech API. Further builds
can easily be used for VR by adding a VR-Plugin using the server-side asset update ability.

The fact that Asset Bundles are imported implies that multiple devices can be used without
changing a single line of code in this build, essentially enabling cross compatibility as a side
effect of the Betaverse. 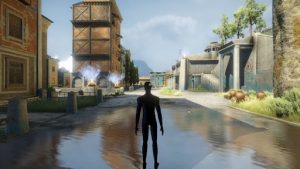 The Road Ahead
The metaverse is like the Wild West, with a technological Gold Rush just upon us. Ojas believes
that it has a huge potential to create dynamic virtual reality user-interaction spaces in the years to
come. Having worked on the tech development side of the project, he realized that the metaverse
in the future must be democratic. Developers must have the freedom to navigate, experiment,
and innovate. They must have control over their metaverse. Any particular organization or a
group of organizations having a monopoly or oligopoly over the space would forfeit the very
purpose of the metaverse. The maintenance of data privacy is also crucial in this regard.

The metaverse is the new age of social media. It will become an integral part of daily lives in the
near future. Young and brilliant minds like Ojas, who are highly motivated by cutting-edge
technologies of the future, are the torchbearers who will lead us into the new future.