About 30 students at IIT KGP have taken up the task of reducing single-use plastic usage in the campus. The students are in the process of forming a students’ society which among other environmental issues will extensively work towards creating social awareness in collecting and disposing of plastic waste including e-waste.

The students have led by example not using single-use plastic for over 4 months and inspiring other students in the campus to follow the feat. The group has also performed street plays in the campus market as part of the awareness campaign. Over 500 students have shown their interest in joining this society and take up the cause. The newly formed society named “Vision Prabaho”, would be undertaking projects to come up with innovative ways of organic, inorganic and electronic waste disposal.

“Segregation of waste is one issue and another is disposing of off the waste, reusing it. We hope these brilliant young minds would be able to come up with some innovations for urban Indians who are creating massive plastic waste which is causing problem for both urban and rural ecosystems,” said Barnali Chakrabarti, an environmental evangelist and the first lady of the campus.

The Prime Minister of India has been making extensive efforts to ‘Beat Plastic Pollution’– including an ambitious pledge to eliminate all single-use plastic in the country by 2022, which has been recognized by the United Nations. The initiative of Vision Prabaho by IIT KGP students follow this national mission of India.

“We hold a great responsibility to actively participate in dealing with the major environmental issues like the irresponsible use of plastics, waste and resource management, conservation of water body, preserving bio-diversity and reducing carbon footprint in and around the campus. Many of us emphasize human-induced environmental changes in recent years. We wanted to apply our own understanding to spread awareness and make changes on the campus. To us “Vision Prabaho” is an IDEA that should remain, even after we leave this beautiful campus,” opined the founding members, Biswarup, Pragnaditya, Sirsendu and Sudeshna, research scholars at IIT KGP.

The group will be working on increasing green cover and personal care for trees. Under the ‘You Plant, You Care’ campaign students are being encouraged to plant trees and nurture them which will carry their legacy even after they graduate. In a recently held photography competition on campus flora, the winners were awarded potted plants by Mrs. Chakrabarti who inspired them to care for the plants and conceived the campaign.

“There are about 30 students’ societies in the campus at present who are engaged in socio-cultural, sports, co-curricular, activities. “Vision Prabaho”, however, will be a unique society, not just in IIT KGP, but across all IITs, considering the fact that our campus is a mini-township and is witnessing challenges quite similar to urban areas though at a smaller scale though fortunately, we have a huge cover of greenery,” said Prof. William Mohanty, President, Technology Students’ Gymkhana at IIT KGP. 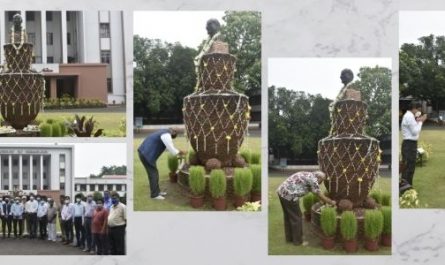 Dr B C Roy- A pioneer of Medical Science, who remodeled the perception on Doctors

2 thoughts on “Say No to Single-Use Plastic”